The pro wrestling world is full of second-generation wrestlers. Young men following in their father’s footsteps into battle in the squared circle.

Each got into the profession in their own way, but their stories are remarkably similar and have a common theme: Wrestling’s in their blood, they grew up watching and didn’t really ever think about doing much else.

In the end, there are really only two types of second-generation wrestlers: Those who surpassed their father’s stature in the business, and those who did not.

“One is not to say that because the father is great at doing something that the son is going to be great at doing it,” explained Nick Bockwinkel, a multi-time AWA world champion and son of 1940s and ’50s wrestler Warren Bockwinkel. The younger Bockwinkel definitely surpassed his father, who was well-respected, but not much more than a regional star.

“The professional wrestling business is a cruel business in the sense that they’re always looking for talent. They’ll give anybody a chance,” continued Bockwinkel. “I pretty much did it on my own. I mean everybody knew by the name [who my] father was at that time in the profession. But would they give me the job, so to speak, simply because they knew my dad? No. You had to carry it on your own.”

Nick Kiniski was the second son of Gene Kiniski to go into wrestling, after his brother Kelly who is three years older. Measuring up against a father who was a former CFL football great and wrestling world champion proved to be a tremendous — and unachievable — feat for both sons.

According to Kiniski, the family name did help. A little bit. “It at least opened doors to get me in a territory,” explained Kiniski, who wrestled for only three years. “But the promoters are interested in one thing, that’s making money. That’s the main draw.”

Names like Barry Windham, Nick Bockwinkel, The Rock, and Terry Funk and Dory Funk Jr., spring to mind when talking about sons surpassing their fathers.

“As it turned out, The Rock at the young age that he is, accomplished far more than his dad [Rocky Johnson] had, and that’s simply because promotion itself has moved into another area, into a much higher level financially with the cable television and everything,” explained Bockwinkel. “And yet, when I see The Rock on TV, I don’t look at him, ‘Look at the young upstart.’ He’s getting the job done because he’s got talent, he’s got the wit, he’s got the moxie. And a lot of this is of course what he picked up from his parents, and being around his father and those people all along.”

Others like the Kiniskis, Kendall Windham, Dustin Rhodes, Yvon Robert Jr. or Phil Watson, were never able to get past their fathers’ legacies and into the next realm of stardom.

The learned, well-spoken, 65-year-old Bockwinkel has a thought on that too. “What happens a lot of times if the father is a star, what takes place is that the pressure is there and that the kid should be a star too. God bless it, you either have it or you don’t. And yet, there’d be guys like myself even, I was very mediocre for the first 10 years of my career. Then for the latter 20 years of my career, I was very, very top drawer. So there’s a learning process.”

Names like Eddie Guerrero, Greg Valentine, Tully Blanchard, Dean Malenko or Ted Dibiase were probably on par with what their fathers did during their mat careers, taking into account the greater role that theatrics played in wrestling in later years. 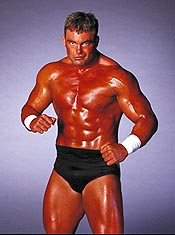 The comparisons are an inevitable part of the job for those of the second generation. Some welcome it.

“It’s actually kind of an honour [to be compared to his father], because he’s passed on,” explained current WCW star Shawn Stasiak of his father Stan ‘The Man’ Stasiak. “I miss him a whole lot, and I wish he was here now that I’m starting something that he had done for 27 years. The business has changed quite a bit since his time. I know he’d be proud and happy for what’s going on. It kind of keeps his spirit alive.”

“Having the name Guerrero opened up doors for me but at the same time I have to live up to the expectations of my brothers and my dad,” explained the WWF’s Eddie Guerrero. “It’s the hardest thing because people expect you to live up to the name.”

The stories about starting in the business are not necessarily your typical father-son bonding.

At the age of 19, Greg ‘The Hammer’ Valentine was put on a Calgary-bound plane by his father — esteemed pro wrestler Johnny Valentine. The Hammer had become fascinated with the world of pro wrestling after traveling around with his father throughout Texas and decided that he didn’t want to return to college. As any good father should, Johnny Valentine discouraged his son from abandoning his pursuit of higher learning. When that didn’t work he sent the youngster to study under Stu Hart.

“My father wanted me to learn the hard way. I suffered. I made a living but the first six or seven years I did it on my own and I’m glad he let me do it that way because you can’t have your father babysitting you,” said an appreciative Valentine in a 1998 interview with SLAM! Wrestling.

For Nick Kiniski, the real training came while in school at Simon Fraser University. There he was a very successful amateur wrestler, and learned how to take care of himself. When he started to wrestle pro after being an alternate on the 1984 Canadian Olympic wrestling team, he went to his brother to learn rather than his father.

“It’s hard for fathers and sons to get along or work together. My dad [was] an excellent wrestler but a sh**** coach,” Kiniski said.

Being the rough, tough, top star that he was, the elder Kiniski had his share of enemies, as his son found out. “Sometimes I’d get in the ring and guys would try to wrestle with me — ‘Your father used to do this to me!’ and try to rub my face in the mat or something. I just had such an extensive background in wrestling, wrestling against world champions, Olympic champions, that they’re not going to do too much with me.”

Yet Kiniski considers tagging up with his father to be one of the highlights of his short career, and he regrets never having a six-man tag match alongside both his father and his brother.

Though Bockwinkel claimed that he starting in the profession “strictly as a job” to make a living and put himself through school, his father obviously had different ideas for him from an early age.

“When I was about 16 years old, he took a picture of me,” Bockwinkel explained about his father. “I weighed about 185 pounds and very trim, fairly muscular for that weight. In fact I look at the picture now and I go, ‘I was a pretty decent little hunk for a 16, 17 year old.’ And he would send that picture out with his publicity, saying this young man will be available in four years. I used to be so embarrassed. You know, when you’re 16 years old, there’s not a picture in the world that’s good [of you]. I said, ‘Dad, why do you do that!’ And he said, ‘Just relax.'”

For some it was destiny to follow their father, for others like Bockwinkel, it seemed that Dad had it planned out all along.