This weekend, in Joliette, Quebec, Northern Championship Wrestling, fresh off a succession of big shows, will be putting on another. This time, though, it’s not a big event because it’s an annual extravaganza with a cool name. No, the June 10 event at Marcel-Bonin Arena is important for altogether different reasons. It’s the end of an era. A very important era in NCW wrestling, since it encompasses their entire existence, from day one — the wrestling career of Phil Belanger.

Belanger isn’t just another wrestler on the card. His involvement has been critical in the progression of NCW. That’s largely because in 1986, at Therese Martin High School in Joliette, with the help of some of his fellow students, Belanger founded NCW. 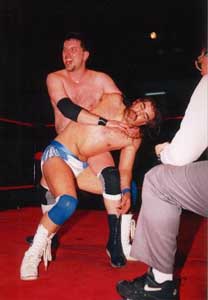 “We were a group of students who just wanted to put on a wrestling show,” recalled Belanger in a recent discussion with SLAM! Wrestling. “I just ended up in charge of organizing the whole thing.”

It wasn’t easy, breaking into the wrestling business the hard way, by starting an organization. “I started by buying a wrestling ring. I didn’t know anything at the time, so I got taken into paying three times its value. After that, I created Lanaudiere Wrestling, which would later become NCW.”

Belanger’s original goal was just to have fun with some friends. “No one thought we were going to make it into the WWF or anything, but we started to realize it might be possible to recreate International Wrestling,” which was a popular Quebec federation a few years previously.

NCW has never been a beacon of riches and fame, but fortunately, Belanger has a day-job. “I’m an educator with a school board,” he revealed. “My job is dealing with the education of students with behavioural problems.”

Regardless, NCW has become a local sensation in many regions of Quebec, including Montreal, where the shows run frequently at what is now known unofficially as ‘NCW Center.’

Belanger recalled some of his fourteen-year career for SLAM! readers. “Frank Blues was definitely my favourite opponent. I just had so many matches — so many of my best matches — with him. I also had some memorable bouts with Iceman.” Belanger will indeed be facing Iceman in his last match this weekend in Joliette.

Perhaps it’s for the best. “Sometimes I ask myself why I founded the federation, it seems like such a large undertaking for an extra-curricular activity, which is what it was.” 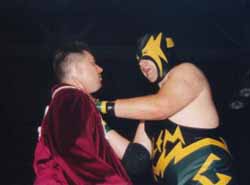 Running a wrestling federation — big or small — is certainly not the easiest of tasks. In fact, running a smaller fed can cause even bigger headaches, since the talent can’t be satisfied simply by wage. “It was very difficult to coordinate a group of volunteer wrestlers, and it was downright impossible to make everybody happy. Some guys only wanted to wrestle in title fights, and others wanted to hand-pick their opponents.”

Needless to say, it was a relief to him when he later on divested himself of some of that responsibility. “The day I sold the wrestling ring to the group of wrestlers, it was like a 400-pound weight had been lifted from my shoulders. I started to sleep again.”

His efforts have earned him a lifetime of memories. “I remember one time, Black Bear was the Inter-City champion. He was slated to drop the title to Jack the Lumberjack, and he wasn’t too fond of that idea. So in a match shortly before that one, against Frank Blues — who he apparently didn’t mind losing to, he let himself lose simply by keeping his shoulder to the mat when he was supposed to lift them after two. The ref didn’t know what was going on. When he later confronted Jack, he simply told him that he had thought the count was at two, not three. To appease Jack, I had to get all mad at Black Bear in front of him.”

Even after he had stepped down from his previous all-encompassing role, Belanger continued to wrestle in Northern Championship Wrestling, but time passed and now duty calls elsewhere.

“Despite everything, my only regret is simply that I can no longer wrestle regularly. Nothing more.”

Fans near Joliette can witness Phil Belanger’s last match — unlike some folks, he probably means it — at Marcel Bonin Arena, Saturday June 10, at 7 PM. Tickets are $8, and the card features, among other likely strong matches, Dream Killer vs. Piranah and of course, Phil Belanger vs. Iceman.