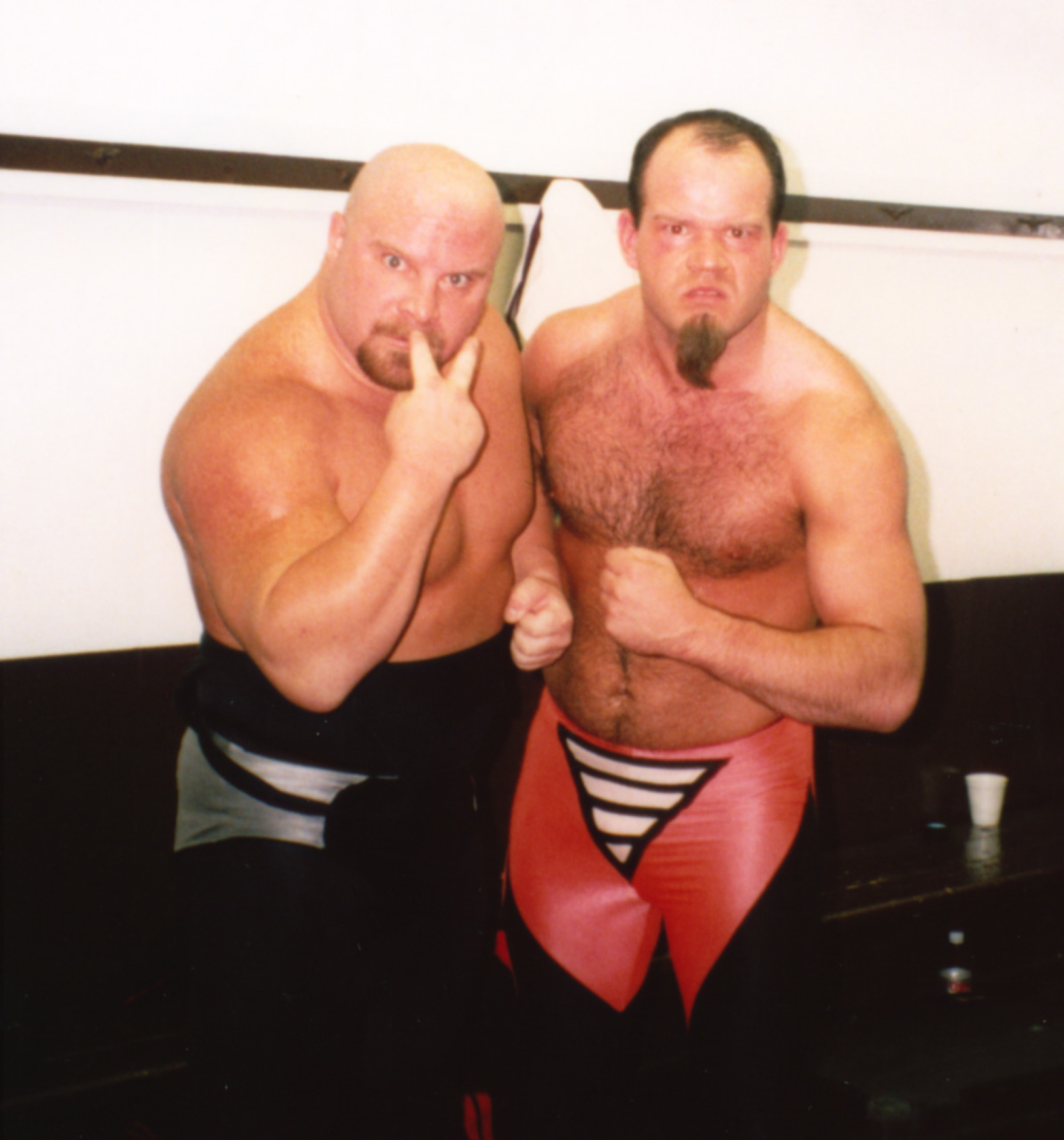 After being trained by Ernest Rheault, Eddie Watts debuted as a cocky rulebreaker for Central Canadian Pro Wrestling.

He’s wrestled across Canada, including Stampede Wrestling in 1988-1989, and many trips to the Maritimes for Emile Dupre.

In Puerto Rico, Watts worked alongside such men as Kerry Brown and Scott Hall (and is credited with teaching Hall how to punch). In 1990, he was WWC Junior Heavyweight title.

Watts has also wrestled in Mexico and Japan, recently teaming with Leatherface (Rick Patterson) as Steelface.

When not on an international tour, Watts can be found as a mid-card performer for the WFWA and River City Wrestling as the Tasmanian.

This bio was written by central Canada’s leading wrestling expert, Vern May of Canadian Wrestle-Media. To learn more about wrestlers from Manitoba and Saskatchewan, Vern encourages you to email him.

I had the pleasure of not only watching Eddie wrestle, but of interviewing him for New Wave Wrestling as well. He was humble, yet confident in his skills, plus he looked pretty cool standing there covered in blood while I interviewed him!
He took a wicked shot from Chi Chi Cruz to the back of the head with a chair, and it opened up a large gash. He figured it was going to result in his tenth concussion.
How can you not respect a guy that got blood poisoning from wrestling 22 barbed-wire matches in Puerto Rico in 23 days!
Scotty Carnegie

I can honestly say that I owe my life to Eddie Watts, because he has never yet succeeded in killing me.
Dave Levinsky, Winnipeg

It is with great pleasure and excitement that I can actually say that I got to see and talk to Eddie Watts this summer in Yarmouth, Nova Scotia. And the best part of talking to him was: I was also able to get some beautiful pictures taken with him. Eddie if you do read these memories, I would like to say that I am also looking forward in hopefully seing you again next year in the Maritimes. And also if I do see you, I will have some beautiful pictures of you to give you.
Love Always, # 1 Fan
Louise (Summer 2000)

I was lucky enough to see Eddie Watts wrestle on the summer 2000 tour of Grand Prix Wrestling. After nearly decapitating one of my friends with an ax handle he was nice enough to have a chat with us about his influences and experiences in the ring. Great technical wrestler and he knows how to work the crowd. A real hard ass and tough as nails to boot. Hope to see him on tour in 2001.
Stu “Grim Reaper”, Moncton, N.B.

I was lucky enough to have the chance to catch Eddie Watts on the Grand Prix circut and I have to say he is one of the biggest hard asses I have ever met. Even though he nearly crushed my skull with an axe handle, he was nice enough to talk with me and Stu about some of his crazy wrestling stories from all over the world. In my opinion with his wrestling skills, experience, and amazing ability to work the crowd I think he’s one of the great performers in the sport. You have to respect someone who wrestled 22 barb wire matches in 23 days!
Dan “Real Deal” Moncton NB

Eddy Watts was always one of the reasons that I used to go watch Real Action Wrestling shows in North Sydney. My friend, Robert Sealey, told me about how crazy this guy was (22 Barbed Wire matches in 23 nights!!!), and I instantly claimed this guy as one of my heroes!
Eddy was an awesome worker. HE always acknowledged my EDDY signs and used to parade them around the ring before and after his matches. I had the opportunity to get my picture taken with him and wish him nothing but the best in the future.
Ryan Doucette (Doobzz), Glace Bay, Nova Scotia