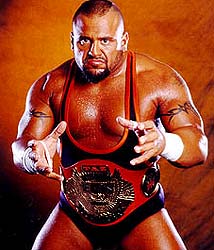 Of all the members of the WCW-ECW alliance, perhaps none of them are as closely attached to their respective company as Tazz. Even though he spent over a year with the WWF before re-aligning himself with ECW, fans never forgot his affiliation with the hardcore promotion out of Philadelphia. It’s easy to see why, as he dominated most of the locker room during his six and a half year run there, capturing every title belt available along the way. For many fans, Tazz was always ECW, and ECW was always Tazz.

It makes sense, then, that the rebirth of ECW would be more than welcome to Tazz, especially since he was such a major player in the company.

“Actually, I wasn’t as excited as you would think,” he told SLAM! Wrestling while in Toronto for the Molson Indy. “I think it’s a great angle, definitely. It’s really great for wrestling fans. But there’s a part of me that feels that ECW should have been left alone. We built ECW into a great cult federation, we were the true rebels of the wrestling industry… it’ll never be like it was.”

Still, from a business standpoint, Tazz realizes that the rebuilding was a necessary thing to do. “It was a good business move. The WCW thing wasn’t going that good, it needed a kick in the ass. In this business, you’ve got to entertain the people, you’ve got to keep the ratings up. ECW was the catalyst to do it — in that sense, it was a good move.”

As well, it does reunite Tazz with his boss in the ECW days, Paul Heyman. “Actually, I knew Paulie from before I was in ECW, I just knew him from New York. I was doing the Tasmaniac (the precursor to the Tazz character of today) in Japan and doing independents in the Northeast. Paulie started up ECW and gave me a call, asked if I wanted to work a couple of matches with this guy named Sabu, that I was just the guy to help get him over. I say, ‘Okay. But I need more than a couple of dates, I’m looking for work.’ I asked him to consider it, he’s cool with that. Six years later, I’m still there.”

It was a lengthy feud with Sabu that really captured the attention of the ECW fans. The matches the men had were brutally violent, and never failed to entertain the bloodthirsty crowds. As both men were aiming for the top spot in the company, this naturally led to some legitimate heat between the two.

From there, both men went on to further success in the company, including several lengthy world title drives for Tazz. During this period, he rarely lost a match, which caused many critics to scoff that he refused to “do the job” for opponents, even when necessary for storyline purposes, a claim that he absolutely refutes.

“That’s just the way I was pushed. People think I didn’t want to do jobs, that’s a bunch of bull. In fact, I was feeling like I HAD to lose some matches — how can you draw money if you can’t lose?”

Those feelings led him to consider his options both with and outside of ECW. And despite the fact that the company was just about to reach a significant turning point — securing a national television contract — Tazz made the decision to leave.

“We were just ready to go to TNN, and I was losing my drive. I was wrestling the same people, I didn’t have anything else to do. I don’t want to say ‘bored’, but I was getting complacent, I started getting comfortable. There was no competition [any] more, and I just had to move on.”

“The way I debuted in the WWF was the single greatest moment of my professional career. I went to Madison Square Garden, a place I always wanted to wrestle, if only just once. I debuted against an undefeated Olympic gold medalist — who happens to be a very good friend of mine (the two are traveling partners) who I have great respect for — and I defeated him. I was so happy to come into the WWF the way I did.”

After an auspicious start, though, fans quickly became disappointed with what the bookers did with Tazz soon thereafter. For example, a brief feud with then-colour commentator Jerry Lawler, appearing less and less on TV and pay-per-view, and losing more than his fair share of matches.

Fans complained repeatedly that their ECW hero was being misused and neglected in the WWF. Many called for his return to ECW, where he could reign supreme once more.

And one night, they got their wish.

ECW was in turmoil. Mike Awesome, the ECW champion, the man who took Tazz’s belt in a match filled with controversy (Tazz’s last match in ECW) was jumping ship. Awesome was leaving the company for greener pastures, those of World Championship Wrestling as part of the New Blood faction. In a last-minute deal, Paul Heyman allowed Awesome to leave ECW provided that he return at some point in the future to drop the belt to a wrestler of Heyman’s choosing. Awesome agreed, and the stage was set for history.

On a fateful night, the ECW crowd was amazed to see Awesome’s opponent, Tazz, make his return to ECW. He defeated Awesome soundly, bringing the gold back to where many feel it was rightfully deserved.

“We made history that night,” said Tazz. “Here you have a WWF wrestler wrestling a signed WCW wrestler on an ECW event for the ECW title. That’s history, and I’m a part of that. And I’m happy I did it.”

At the time, though, he wasn’t sure he wanted to be involved. “I wasn’t crazy about it, because I wanted to get out of the ECW stigma — my career was now (with the WWF). But, I think Vince (McMahon) was trying to help ECW, and he felt that I was the guy who could do it, and he, Shane [McMahon], Bruce Pritchard, J.R. [Jim Ross], they came to me and told me about it. They didn’t tell me I had to do it, they asked me if I’d mind it. But if your boss comes to you, and you’re new with the company, you’re going to try to make him happy.”

Also helping him make the decision was the loyalty he felt to Paul Heyman. “Paul did a lot for me, I wanted to help him out, too.

Some internet rumours maintain that at least part of his motivation was legitimate animosity he felt towards Mike Awesome, stemming from the way that Awesome left ECW in a lurch. Tazz denies such allegations, insisting that he never had any personal differences with Awesome. “I have no problem with Mike Awesome. I had a problem with the way he did business. And Mike knew I felt that way, a lot of guys felt that way about Mike. I think if Mike had to do it all over again, he’d do it different. People make mistakes in life, make wrong moves, and it’s fine. But I personally never had heat with Mike. If the fans want to think that, that’s fine, that’s good for business. But there was never heat.”

Other than that brief highlight, Tazz fans still had little to celebrate. He appeared to fade away from in-ring activity altogether, instead taking on commentating duties on Sunday Night Heat and Smackdown! For fans, this was perceived as an outrage — his career, in their mind, had reached its lowest point.

For Tazz, though, things couldn’t have been better.

“I love commentating, I’m very glad Vince gave me the opportunity, and I mean that sincerely. I’m not being politically correct here, I’m shootin’ with you.” About the complaints about the lack of a push, Tazz says that’s a crock. “It’s not about titles. I’m on three major TV shows for the World Wrestling Federation, hosting two of them and starring on one as a trainer. I’m on TV close to three hours a week — that’s a push in my book.”

One of those programs, “Tough Enough” is seen on MTV, and consequently not available to most Canadians. It’s probably the show Tazz is most proud of being associated with. “I think it’s a shame that people in Canada don’t get to see (it). I think the next time, you will get it. It’s a great show. It shows how difficult it is to do what we do. It shows thirteen kids trying to achieve a goal, trying to complete a dream. And you’ve got guys like me and Al Snow standing in their way, making it physically, and mentally, and emotionally hard on them. It’s a great story, it’s a great show.”

As far as who wins, Tazz is bound to secrecy. However, he does feel that the winners (who receive a WWF developmental contract as their prize) won’t disappoint the viewers, or the WWF fans. “The people that last have a lot to offer the business, and I think they’ll have a great future in our business.”

For Tazz, the future involves continuing on in the WCW-ECW invasion storyline, at least on a short-term basis. Moving beyond that? “That’s a very good question. We’re not exactly sure yet. It’s going to be very hard to do commentary for WWF programming at this moment, but I wouldn’t mind getting back into that. I really enjoyed that, I felt like it’s a good future for me. I think I still have a few good matches in me, and then after that I’d like to go back into commentating. In this business, you’ve got to take every day as it comes. And that’s what I’m doing — taking every day as it comes.”