Billy Kidman’s pretty confident heading into Sunday’s U.S. title match on the WCW Spring Stampede PPV. And why shouldn’t he be confident?

He’s getting the biggest push of his young career, he’s just pinned Hulk Hogan 1-2-3 on Monday Night Nitro, and he’s finally getting time on the microphone. The new WCW creative team of Eric Bischoff and Vince Russo appears to believe in the future of the 25-year-old Kidman.

In an interview on Friday with SLAM! Wrestling while hanging out in Omaha, Nebraska, waiting for tonight’s house show, Kidman predicted that he would come out on top in Sunday’s match. 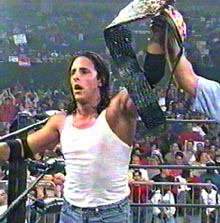 Kidman a while back as Cruiserweight champion.

“Watch out behind you, make sure that nobody clips your legs, or falls on anybody and breaks your leg,” Kidman explained. “It’s going to weird, it’s going to be a little bit of a cluster, but hopefully we’re going to work it out and have a decent match.”

He knows that he cannot rely on any of his former partners like Booker or Vampiro in the match. “You can’t rely on them too much because everybody’s out for the belt,” he said.

All of WCW is looking forward to this PPV, he said.

“This is probably the biggest thing WCW’s done in a long time because they’ve got Eric and Vince coming back, and all the belts are going to be up — the New Blood versus the Millionaire’s Club,” he said. “I’m looking forward to it. It’s the hottest thing we’ve done in a long time.”

Before signing off on the interview, Kidman did offer his picks on a few of the other matches on Sunday’s PPV.

Jeff Jarrett vs Diamond Dallas Page for the WCW World title? “I’ll have to say Jarrett in that one. I think the New Blood’s going to come through strong on the whole card.”

As a former Cruiserweight champion, Kidman is a good source to predict the six-man title match featuring Juventud Guerrera vs The Artist vs Chris Candido vs Crowbar vs Shannon Moore vs Lash LeRoux. Kidman picks Crowbar, but warns “never underestimate Juventud.”