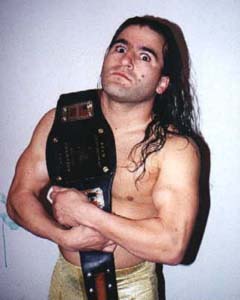 “Tornado” Tony Kozina is a whirlwind of a wrestler for someone who’s only been competing in the sport for two years.

The current NWA Pacific Northwest Jr. Heavyweight champion has been turning heads in Extreme Canadian Championship Wrestling (ECCW), an NWA-affiliated promotion based out of British Columbia which will be running a full-time schedule this fall as they plan to expand into Oregon and Washington.

On the way back to B.C., Kozina will be making stops for Can-Am Wrestling in Grand Prairie, Alberta and Stampede Wrestling in Calgary.

This windstorm of a schedule is typical for Kozina. He has worked hard to prove the critics, who told him he was too small to make it as a pro wrestler, wrong.

“I go started in wrestling through Billy Jack Haynes,” Kozina told SLAM! Wrestling. “He had a radio show in Portland, Oregon and I told him how WCW’s Power Plant had told me to bulk up before I start training. He told me he was starting a wrestling school and that he would teach me.”

Kozina, who stands 5’6″ and weighs a mere 168 pounds, has had to rely on his undaunted determination, as well as the help of several veterans, to make it where he is today.

“After training with Billy Jack, I refereed for three months for Sandy Barr’s Championship Wrestling USA in Vancouver, Washington. I always brought along my wrestling gear hoping for a chance to wrestle,” said Kozina.

“One night they were short a man and needed someone to fill in,” recalled Kozina. “Booker Matt Borne (the original Doink) looked at me and asked if I was ready and I said yeah!”

From there, Kozina worked on the independent circuit, travelling up and down the West Coast of Canada and the U.S. He gained invaluable experience in the Mexican-wrestling style, working for a Lucha Libre promotion based in Los Angeles as well as working a four-day tour for Rey Misterio Sr’s ProMell promotion when they toured Oregon last year.

“Misterio saw one of my matches live and liked what he saw and booked me on his shows,” stated Kozina. Adapting to the Lucha Libre style was not a problem for Kozina.

“I fell right in,” said Kozina. “The Lucha style is a lot more acrobatic. There are more flying around and more interesting moves. I wrestle a similar style so it came naturally to me. Once I got past the language barrier, it was no problem at all.”

Kozina credits several veterans of the sport for helping him along in his career.

“Every dressing room I’ve walked into has been fantastic,” stated Kozina. “There’s always been a veteran that’s helped me along and taken me under their wing. Guys like Borne, Haynes and Michelle Starr have all helped a lot and I’ve sucked up everything they’ve told me like a sponge.”

“I wrestled Matt Borne in some tag matches which was great,” remembered Kozina.

As far as future plans go, Kozina will be splitting his time between ECCW and several other promotions along the West Coast.

“I’ve contacted and sent my photos to World Power Wrestling, a Lucha promotion in Anaheim, California as well as to promoter Benjamin Mora in Tijuana, Mexico,” said Kozina. “Someday I’d love to go to Mexico or Japan. I don’t think the WWF would be the place for me because they don’t have a light heavyweight division.”