Jeff Thomas stands as a giant among men, at least in the Can-Am Wrestling Federation. Standing at 6-foot-7, and weighing in at over 320 pounds, the ex-Edmonton Eskimo is easily one of the biggest, if not the biggest star on the CAWF’s roster.

Trained by Leo Burke (wrestling trainer extraordinaire, and friend of the legendary Hart family), Thomas sells himself as an agile brawler who, because of his training, can wrestle against the best of the big men, or execute moves that were only thought possible by luchadores. As matter of fact, Thomas met former WWF/WCW champion Bret Hart, who recommended Thomas to Burke. 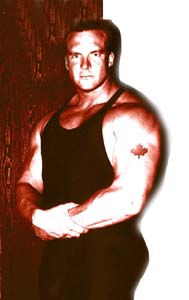 If Burke is anything like iron man Stu Hart, then Thomas had to be put through his paces. Seemingly different, Thomas says he tried perfecting his aerial moves on diving boards. He says his training was excellent, but there was just one problem.

“When I trained at the Hart place, with Leo, there wasn’t enough room on the (swimming pool) board over there. My forehead was only four inches under the ceiling, and I couldn’t even execute snap suplexes”

Which is probably why Thomas doesn’t perform any aerial finishers, utilizing his large size to full effect by wiping out his opponents with a Northern Lights Powerbomb.

Having been in the CAWF for only a short time, Thomas already appears to be making a run at current champion Steve Wilde’s title. Of the eight matches under his belt, three have been title shots, and one a battle royal that he emerged from victorious. It’s been one his title shots against Wilde that Thomas says has been his most memorable moment in the ring.

“I got cut open real good. I was wrestling Steve Wilde in a title match, and he threw over to a turnbuckle, and I hit it pretty hard. I have nice 2-inch gash across my forehead, and there was blood everywhere. The crowd loved it though, but not my wife.”

Currently, Thomas looks to be wrestling against Stampede Wrestling stalwart Cyborg, in the Battle Of The Giants on the CAWF’s tour of the same name, starting January 19, in Greenfell, Sask. And ending Jan. 30. Former WWFer Kurrgan will also join the tour to battle Thomas.

While he’s looking at a run as CAWF champ, he says his long term goal is to be WCW champion, and stated that he prefers the Atlanta-based promotion because of his respect for both the Hart’s and Burke.

Outside of mastering the moves of the squared circle, Thomas, who is originally from London, Ontario, says he doesn’t have much trouble with any other aspects of ring magic. His mic skills need some fine-tuning, but he says that will come in time. As for taming crowds, he says it’s not a problem, as being a professional athlete in the CFL taught him to deal with major crowds, especially since he won the Grey Cup in his first, and only, year in the CFL in 1993.

His trainer Leo Burke thinks that Thomas has “a lot of potential” and that he “has all the tools he needs” but that he lacks in experience. Burke believes that should Thomas go on the road, and really concentrate on wrestling, that “the sky’s the limit.”

The sky may be the limit for Thomas, but he knows he has to pay some dues before reaching the top. Look for him to possibly form a team with the Cuban Assassin, as Thomas came to his aid against Steve Rivers and the Black Ninja at a recent house show in Alberta.