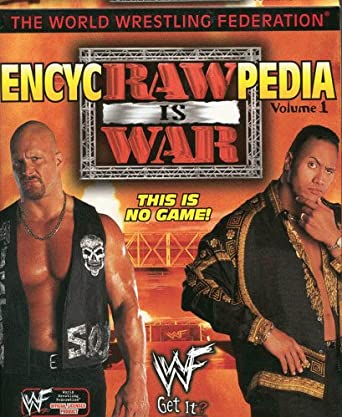 If you are like me and don’t have a recordable CD Rom at home, you have wrestling pics, sounds and screensavers scattered all over every track of your hard drive. I’ve often wished I could gather up that clutter and store it on one easily accessible disk. The people at m-2k have answered my prayers and done just that with Volume One of their EncycRAWpedia series. Jam packed with pics, sound files, bios and videos of your favorite WWF superstars, the EncycRAWpedia will save any die-hard fan from spending hours scouring the Internet for electronic keepsakes.

Volume One is introduced by the fireball-hurling phenomenon himself – Kane. A strange choice bearing in mind that the Undertaker’s bro has barely spoken a handful of words since Paul Bearer brought him to the WWF. Surrounded by fire and brimstone, the computer-animated Big Red Machine utilizes that hand-held, voice-box thingy to explain the history and significance of the Raw Is War program to the uninitiated.

The EncycRAWpedia is a menu driven program wherein selecting specific headings will lead you into more in-depth areas on an individual subject. The guide is broken down into twelve separate areas: Steve Austin, The Rock, Mankind, D-Generation X, Austin and Vince McMahon, The Corporate Ministry, The Best Of Raw, Sound Bites, The Photo Gallery, Superstar Bios and Raw Screensavers. The superstar areas come complete with an assortment of multimedia items to choose from. The Photo Gallery and Sound Bites areas are total write-offs. The Photo Gallery and Sound Bites section contain a paltry 15 WWF promotional superstar photos and eleven sounds which could be easily obtained from the fed’s own Web site. Users may find it more useful to access the CD-Rom itself a treasure trove of pics and sounds saved there.

When you install the program three screensavers (WWF superstars, Debra and Steve Austin) are automatically placed into your display settings directory. The screensavers cycle through about four or five pictures without any sound accompanying them. That’s really disappointing once you compare them to other screensavers you can download for no charge whatsoever from many a great screensaver site on the Net.

The area in which the EncycRAWpedia does take off is it’s video clip archive. The video packages themselves are worth the cost if you aren’t into saving every Raw ever broadcast on video tape. Steve Austin and Paul Wight tearing down the Titantron. Austin’s zany Zamboni ride. Highlights of the Austin – McMahon feud. The Undertaker’s wedding to Stephanie McMahon. Mankind winning the WWF World Heavyweight Title for the very first time. The unforgettable moments are there to watch at a click of a mouse button. Pretty impressive stuff that.

The EncycRAWpedia is m-2k’s first stab at a WWF multimedia guide. Taking that into account, some indisputable improvements are in order. Knowing that what they are packaging is floating around on the Internet, m-2k needs to specialize their content and render more of it. The EncycRAWpedia is lacking in some areas and exceptionally gratifying in others. Next time around maybe Volume 2 will be a consistent effort across the board.