Starrcade was the original super card 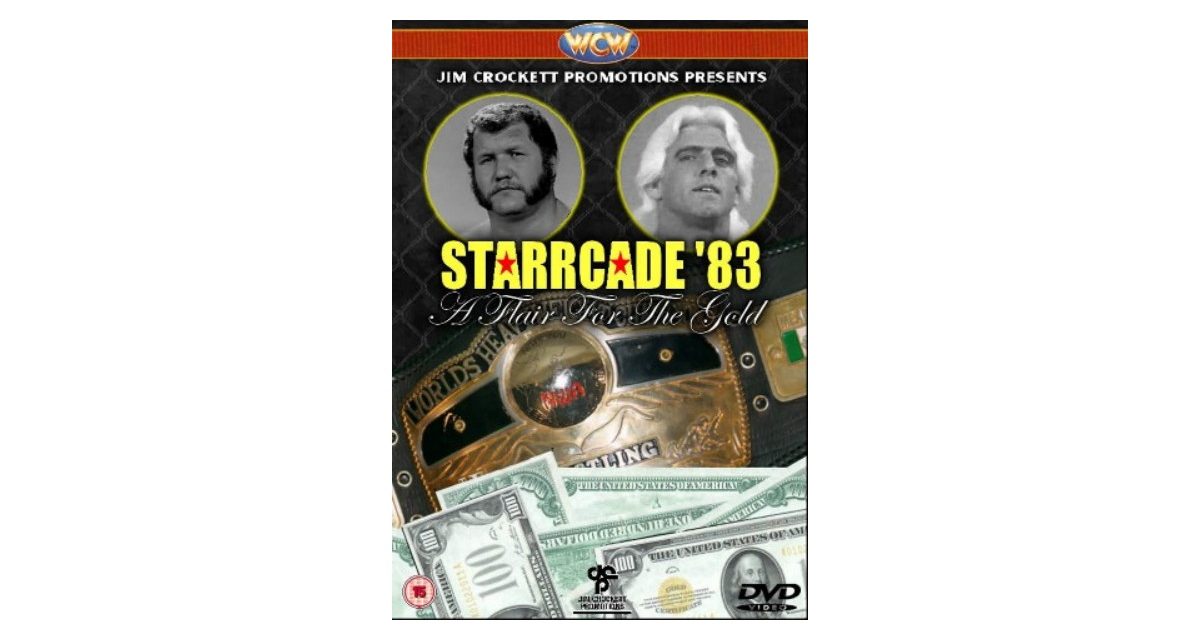 Wrestling announcers are renowned for using hyperbole: “This is the greatest pay-per-view I’ve ever witnessed” or “so-and-so is the greatest sports entertainer in the business today.” They’re all good catch phrases, but in the end, they don’t amount to much more than that.

However, when Mike Tenay or Tony Schiavone plug Starrcade as the grandaddy of them all, you better believe them. Before there was ever a WrestleMania, there was Starrcade, the original “super card”.

In 1983, Jim Crockett Jr. was trying to come up with an idea for an event that would act as the blow off for all the major feuds in his Mid-Atlantic territory. Crockett, along with booker Dusty Rhodes came up with Starrcade, an annual Thanksgiving spectacular.

Each year, the hottest feuds involving the top stars in Crockett’s territory, mixed in with wrestlers from other NWA offices would be booked on the annual card highlighted by a title defense by the NWA World Heavyweight Champion.

Starrcade ’83 took place before a sold out crowd at the Greensboro Coliseum in North Carolina as Ric Flair won the NWA World Title for the second time from Harley Race in a cage match.

The title match was only one of several classic matches on the show including Greg Valentine and Roddy Piper battering each other into a bloody oblivion in a dog collar match, Ricky Steamboat and Jay Youngblood winning the NWA World titles from the Brisco Brothers and the hottest feud in Puerto Rico’s WWC promotion came stateside as Abdullah The Butcher beat Carlos Colon.

Starrcade ’83 was historic for several reasons. Crockett knew that the Greensboro Coliseum (capacity of 16,000) would not be able to hold all the fans in the Carolinas who wanted to see the event. Crockett had the foresight to offer the show on a closed circuit basis setting up giant screens in arenas around the Mid-Atlantic promotion’s regular tour stops. Over 40,000 fans watched the spectacular on closed circuit screens in cities like Charlotte, Columbia and Spartanburg, South Carolina. Although closed circuit TV had been used to telecast previous events, Crockett popularized it.

Starrcade ’83 was also significant because it secured Ric Flair as the long term NWA champion. In the months leading up to the event, several NWA promoters were campaigning to get the NWA title off the aging Harley Race onto a new, younger wrestler. Every promoter wanted someone from their own office as the champ so they could secure better dates when the NWA champion toured.

Fritz Von Erich, one of the most powerful promoters in the NWA, was maneuvering to have his son David win the title from Race. The Texas promoter saw his son as the next long-term NWA champ and came up with the idea of running a Race vs Von Erich match on Christmas night in Dallas where if David didn’t win the title, he would have to retire.

Crockett had other ideas. He knew he had something hot in Ric Flair and wanted the pay off match of Flair winning the title from Race after months of chasing him around the circuit. Crockett also knew that such a match would not only sell out the Greensboro Coliseum but would also draw full houses at closed circuit locations.

Crockett convinced the majority of the NWA Board of Directors to put the title back on Flair by having him go over Race at Starrcade, securing his fate and the fate of the NWA forever.

In 1985, Crockett realized Starrcade was too big for one venue to hold so he split the card between two of the NWA’s stronghold markets, the Greensboro Coliseum and Atlanta’s Omni. Starrcade ’85 was famous for one the most memorable matches in Mid-Atlantic history: a steel cage, “I quit” match between Magnum TA and U.S. Champ Tully Blanchard. The bloody affair set new standards for brutality as Magnum forced Blanchard to say “I quit”. In another major undercard match, The Rock ‘n’ roll Express beat the Koloffs in a steel cage to win the NWA World Tag titles.

Starrcade ’85 wasn’t without controversy though. In the main event, Dusty Rhodes pinned Ric Flair to win the NWA World title. Dusty was announced as champion and fans left the Omni thinking he was the champion. A week later, fans tuning into the NWA’s flagship program on TBS found out that the decision had been reversed and that Flair had been DQ’d for an earlier infraction in the match.

This move serves as a textbook example of the dreaded ‘Dusty Finish’, a screw job ending that gives the fans the impression they had seen a title change only to have one referee over turn it after the fact. Rhodes made this his booking trademark and it was the use of the “Dusty Finish’ that helped to dilute the NWA championship.

Starrcade ’86 again took place in Atlanta and Greensboro. Greensboro was the site of a bloody affair as Tully Blanchard defeated Dusty Rhodes in a “first blood” match to win the NWA TV Title. The Rock ‘n’ roll express defeated the Anderson Brothers in a steel cage to retain the NWA World title straps while the Road Warriors defeated the Midnight Express in a scaffold match. The main event, a world title affair between Flair and Nikita Koloff, ended in a disappointing DQ.

Starrcade 87 was another historic event. Having just bought out Bill Watts and purchased his Universal Wrestling Federation, Starrcade 87 was the fist marquee event featuring former UWF stars in prominent matches on a Crockett event.

It was also the first time the event strayed from the familiar confines of Crockett’s Mid-Atlantic territory and came north to Chicago. The NWA office was starting to compete with the WWF on a national basis and Crockett and Dusty saw this as a pivotal event.

Unfortunately, they took a blood bath. The WWF, wanting to stunt Crockett’s growth, ran his innugural Survivor Series PPV opposite Starrcade. With a choice between the two, the majority of cable providers decided not to carry the NWA event. It was a critical maneuver by the WWF to go head-to-head with Crockett and one that would lead him to selling his promotion to Ted Turner a year later.

Business maneuvering not withstanding, Starrcade 87 was a success in the ring. Ric Flair regained the NWA title from Ronnie Garvin in a cage match. The UWF and NWA TV titles were unified as Nikita Koloff defeated Terry Taylor. Dusty Rhodes defeated Lex Luger in cage match to win the U.S. title (sparking Luger’s baby face turn weeks later and setting him off on a memorable run with Flair) and the R&R Express defeated the Midnight Express in a scaffold match.

The Dusty finish managed to pop up again as the Road Warriors beat Tully Blanchard and Arn Anderson to win the NWA tag titles, only to have a second ref come in a reverse the decision for an earlier infraction.

In 1988, the Turner-era began as TBS bought out Jim Crockett. Dusty Rhodes, in trouble with the Turner execs over a bloody angle he ran on their show on the TBS station, was being replaced as booker. Starrcade was moved to Boxing Day to avoid direct competition with Survivor Series.

Amidst all this flux of movement, Ric Flair gained control and booked his own program and put himself over Lex Luger in the main event to retain he NWA title. In memorable undercard matches, Rick Steiner beat Mike Rotunda to win the TV title, Barry Windham beat Bam Bam Bigelow to retain the U.S. title and Dusty Rhodes and Sting teamed up to beat World champs Road Warriors by DQ.

Starrcade ’89 was the first one that didn’t feature a title defense by the NWA World champ. The show was billed as an Iron Man Tournament as Lex Luger, Flair, Sting and Great Muta competed in a round robin singles tournament. Sting won the single competition while the Road Warriors won the tag title competition.

Starrcade ’90 emanated from the historic Kiel Auditorium in St Louis as NWA champ Sting beat The Black Scorpion (Ric Flair under a mask) in a cage to retain the NWA World title. The Steiners beat Muta and Masa Saito in an eight team – international tag tournament and Luger beat Stan Hansen in a bull rope match to regain the U.S. title.

Another fist for Starrcade ’91 as it was the first without Ric flair (He had left for the WWF months earlier after a dispute with management). This Starrcade hosted the first Battle Bowl event as wrestlers teamed up in a blind draw with the winners advancing to the final two ring battle royal. Sting outlasted the others, setting himself up for a title match against Lex Luger at SuperBrawl 3 where he later won the title.

In 1993, Ric Flair was back in WCW and he put his career on the line versus Vader’s WCW title in the main event. Before his hometown of Charlotte, Flair beat Vader in one of the most memorable matches on PPV.

Starrcade ’94 had Hulk Hogan’s fingerprints all over it and was marred by his ego-driven booking. He defeated former tag partner The Butcher in what stands as the worst Starrcade main event ever.

Starrcade ’95 made up for the previous year as WCW and New Japan Pro Wrestling squared off in a best of seven series. Japanese wrestlers such as Jushin Liger, Koji Kanemoto and Shinjiro Otani worked the show and displayed their incredible skills. In the main event, Flair regained the WCW title from Randy Savage.

Starrcade ’97 headed to Washington, D.C. and saw the new Sting descend from the roof (figuratively speaking) to defeat Hulk Hogan for the WCW Title. Bret Hart made his WCW debut serving as guest referee as Larry Zbysko defeated Eric Bischoff to retain control of Nitro for WCW.

Last year’s Starrcade started off with a fantastic match for the cruiserweight title between Kidman, Juventud Guerrera and Rey Misterio Jr. It quickly fell apart from there into one of the worst Starrcades which was topped off by Kevin Nash beating Goldberg for the WCW Title.

Starrcade has come a long way in its 16 years. It’s progressed from the marquee event of Jim Crockett Promotions, to the feature card of WCW to just another show in the monthly glut of cookie-cutter PPVs that pollute the wrestling world today.

As it says goodbye to this century and boldy looks forward to the new one, we can only wonder what lies ahead. Whatever it is and whatever the future brings, Starrcade will always be remembered as the grandaddy of ’em all!

Top 10 Starrcade Matches Of All Time