Rock ‘n’ Wrestling cartoon best left in the past

Way back in 1985, the WWF was riding a mainstream media wave of attention, and capitalized on the whole Cyndi Lauper-led rock ‘n’ wrestling connection with a memorable first WrestleMania. And a not-so-memorable, short-lived TV cartoon series, produced by DIC Animation City.

Hulk Hogan’s Rock ‘n’ Wrestling is typical Saturday morning pap, nothing more. The stories are simplistic and obviously aimed at children, and the animation is routine and dull. There’s no real fighting, or even tension, between Hogan and his buddies and the bad guys, headed by the dastardly Rowdy Roddy Piper. 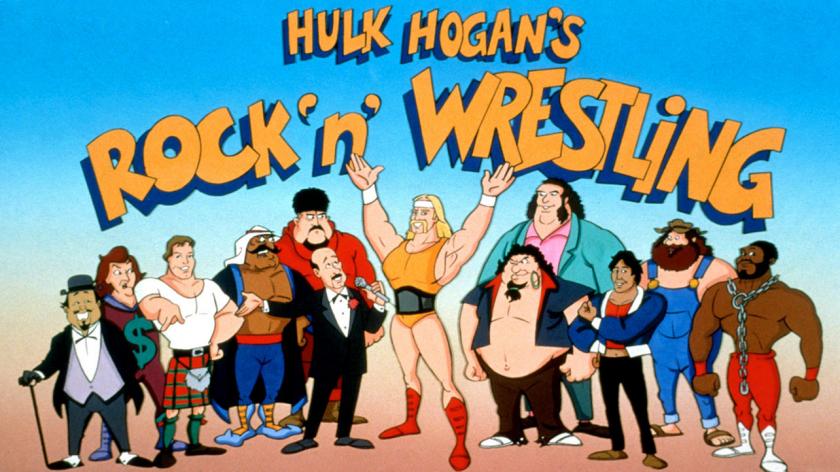 But worst of all, having watched the show on occasion as a young teen, is the jarring realization that – gasp! – the voices of the cartoon characters are not done by the real wrestlers. So without Piper being Piper, or Andre the Giant’s mumblings or Nikolai Volkoff’s ‘Russian’, what’s the point, really?

What we’re left with are the good guys (Hogan, Wendi Richter, Tito Santana, Junkyard Dog, Hillbilly Jim, Superfly Snuka, Captain Lou Albano and Andre the Giant) versus the bad guys (Piper, Fabulous Moolah, Big John Studd, Volkoff, Iron Sheik, and Mr. Fuji). But even then, of the three tapes — each with two episodes — there are only two shows with both the heels and the faces. Those two are at least semi-entertaining because of the baddies, but watching ‘Hulk and the gang’ by themselves makes me as ill as it did 14 years ago as a youngster rooting for Piper and Ace Orton.

And don’t get me started on the occasional ‘comedic’ live action segment, usually with Mean Gene Okerlund. Tuesday Night Titans it ain’t, which should tell you something.

Call Hulk Hogan’s Rock ‘n’ Wrestling a period piece if you will. (It ran from Sept. 14, 1985 until June 13, 1987 on CBS.) But while suffering through the brutal Pac-Man-style background music or the ‘Hulk, Hulk’ intro theme by cheesemeister Jim Steinman (the man behind Meatloaf’s Bat Out Of Hell album) I was wishing more than once that there actually WERE commercials from 1985 on the tapes as well. Now THOSE would have stood the test of time!

When Hillbilly Jim’s pet raccoon, Mortimer, gets sick, hillbilly medicine is the cure. The only problem is that the whole gang ends up eating it! The effects of the medicine lead to an unexpected side-effect and an adventure with some no good car thieves!

The gang gets invited on a cruise. Everything is fine until each of the wrestlers starts mysteriously disappearing. It’s up to Hulk Hogan and Rowdy Roddy Piper to get to the bottom of the mystery and foil the dastardly plot of their host!

The gang’s chartered plane makes an emergency landing deep in the jungle. With no radio to call for assistance, Hulk and the gang go in search of help. Captured by Amazon jungle women, the gang befriends them to foil the greedy treasure hunters’ search for the Temple of Tedra and its valuable treasure.

A quiet day on the farm is cut short when the gang is asked by NASA to help rescue stranded astronauts. Who has what it takes to pass the tests and go to space for the rescue? Will they be able to rescue the stranded shuttle before it’s hit by a satellite?

It’s a close encounter for Junkyard Dog when he finds an alien eating his junkyard. The gang befriends the alien that JYD names Bucket, only to find someone has stolen his space ship. It’s up to the gang to get the space ship to help Bucket get home.

A horse keeps following the gang around wherever they go. When some guys come to claim the horse, they steal the Hulkmobile. The gang discovers the owner of the horse is a little girl, when the crooks kidnap both the horse and the girl. It’s up to Hulk and the gang to save the girl and foil the crooks.