‘The Loved One’ an insightful look Foley’s early days

It is a foregone conclusion that Mick Foley’s wrestling career is coming to a close. He has mentioned in recent interviews that he feels it is time to slow down, and it was heavily inferred on the recent A&E Biography special on his life and career.

As Foley’s final day draws near, it is an appropriate time to reflect on his storied career. The 1995 IWA Death Match Tournament, his bloody rise to fame in Japan, the independents, and ECW, his short-lived Sailor persona in WCW (okay, maybe we should forget that one), and his transformation in the WWF from superstar to legend.

But what was the first step on Mick Foley’s road to greatness? That would be The Loved One, the “mockumentary” about the wrestler Dude Love. 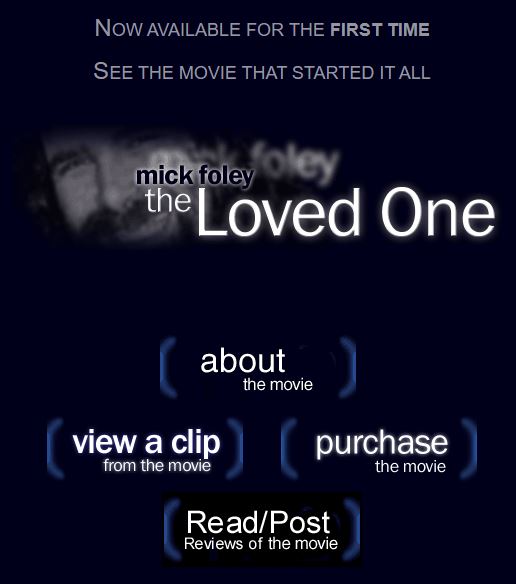 You may have heard of this movie, as footage has previously been seen on WWF programming (Foley’s multi-part interview with Jim Ross), and on the aforementioned A&E special which included comments by co-star and co-creator, Dan Zucker (referred to on A&E as Foley’s “childhood friend”).

Until recently The Loved One has never been seen available in its entirety. However, Zucker has now released the video for sale – for further info, visit www.thelovedone.com.

Dude Love, as you may recall, was one of the three characters portrayed by Foley in the WWF – a vehicle for Foley’s transformation from freak (Cactus Jack) and monster (Mankind) to a talented heartthrob worthy of respect and adoration by the fans.

Originally, the character was a creation by Foley, Zucker and their friends 15 years ago. The Loved One is their home-made film detailing the life of the Dude, from his roots as pathetic loser Mick Foley into a wrestling superstar who captures the WWF gold as well as the hearts of ladies all over the world. Zucker plays Dude’s manager, “The Grand Lizard” and various other high school friends round out the cast and production crew.

What makes this movie worth a look is seeing the hints of stardom in Mick Foley at a young age. The interviews he cuts, while full of standard cliches, are delivered with much enthusiasm and verve – a trait that he has expanded upon in his actual wrestling career, as Foley’s mic spots are some of the best in wrestling.

As well, the movie demonstrates what lengths Foley will go in order to achieve his dream – the highlight being Foley’s famous leap from the top of a garage onto a stack of boxes and mattresses during the climactic title match. What isn’t generally known is that Foley jumped twice to film this scene – the second time because the first take wasn’t caught on film just right. Even before becoming a hardcore icon, Foley’s desire to put on a great show is evident by this feat. Other acts showing his commitment to the role are his eating of dog food, and stubbing a cigar out on his tongue – just to show what lengths he will go to in order to achieve his goals.

Sounds like somebody who would eventually go on to take 19 chair shots in one match, doesn’t it?

Personally, I found the story and the script very clever and, taken in conjunction with the A&E special and the J.R. interview, found that the movie fleshed out some of the questions I had about the man behind the mask. For example, Mick’s dating failures in high school, which he discussed at length with Jim Ross, are central to the plot.

Technically, as is the case for most home-made movies, the production is generally weak – more “Blair Witch Project” than “Citizen Kane”. The camera work is shaky, the sound is occasionally muffled, and the acting (other than the performances of Foley and Zucker) is wooden and forced. Although, the music video sequence showing Dude Love’s rise to the championship is very well done, complete with “Rocky”-esque clips of Dude’s matches interlaced with magazine covers and headlines chronicling his rise.

As well, having been written by a small circle of friends, the script is complete with inside jokes (eg: jokes about Foley’s physical appearance, a subplot about a friend’s sugar addiction) and toilet-humour (eg: a finishing hold called “The Sodomizer” is an accurate description of the move itself) which many may not find particularly amusing.

Personally, I was able to overlook these negatives. In fact, I sort of regarded them as being a truer indication of who Mick Foley really is. Throughout his career, Foley has never pretended to be perfect – he’s not a polished athlete nor is he particularly attractive or mainstream. In those respects, The Loved One almost mirrors the man himself.

For casual wrestling fans, The Loved One isn’t necessarily a worthwhile purchase. It’s a curiosity, sure, but not a must-have. For fans of Mick Foley, though, it is a good glimpse at the man before he was a star. A look back on what would ultimately become the most unlikely hero in wrestling.

The Loved One is 53 minutes long, filmed in colour, and contains some violence and adult language.