Who is Edge? Here are the facts!

After years on the southern Ontario indy scene, Toronto’s Adam Copeland transformed into Edge, a mystery man who appears out of nowhere to inflict punishment on unsuspecting victims. 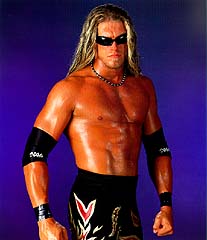 So what do we know about Edge?

He was trained at Sully’s Gym in Toronto by Ron Hutchison and Sweet Daddy Siki. Other grads he trained with included Johnny Swinger, Joe E. Legend, Zakk Wylde and Christian Cage.

His most frequent tag team partner was Cage, and the two were known as The Suicide Blondes. At that time, Copeland went as Sexton Hardcastle.

It took him a little more than five years to make it to the big leagues.

“Five years from now, I’d like to sign another five-year contract,” Copeland told the Ottawa Sun’s Tim Baines in a recent interview.

By early 1998, he was already a WWF vet, as an “enhancement” wrestler for Canadian shows under the Sexton Hardcastle, and Copeland monikers. His wrestling travels had taken him across Canada and to various spot shows in the U.S.

After participating in the WWF training camp run by Tom Pritchard and Dory Funk Jr., Copeland was given the Edge character.

He likes the character he’s been given by WWF owner/choreographer Vince McMahon.

“I’m still this mysterious guy in the rafters running in and popping people,” Copeland told the Ottawa Sun.

Jim Cornette said “This Canadian boy will likely make history.” The WWF Magazine’s Vince Russo said Copeland will be “The next Ric Flair.” Jim Ross stated on his hotline that Copeland will one day be World Champion.