Bret Hart was all smiles Friday morning as he greeted his public at Toronto’s Air Canada Center. In town to help promote first day ticket sales for WCW’s Mayhem PPV in November, Hart views the company’s return to the Toronto market as an exciting opportunity. 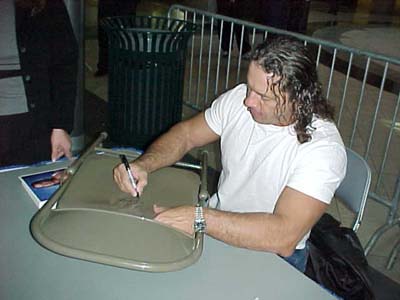 Bret Hart signs a steel chair for a fan in Toronto on Friday. — Photo by Greg Oliver

He wants to put the months of misuse by WCW management behind him and look to the future.

“I’m kind of starting from a whole new slate here,” Hart told SLAM! Wrestling in an exclusive interview. “It’s a bit early to say how good things will get for me here but at the same time I expect some positive changes.”

Hart is ecstatic about WCW’s return to Toronto next month. He’s confident that he will make a lasting impression on WCW that evening.

With the tragic death of his younger brother Owen lingering in his conscience, Hart is in better spirits these days. The match he had with fellow Canadian Chris Benoit two weeks ago on Nitro was very therapeutic for the grieving Hart.

Taking place in Kansas City’s Kemper Arena, where Owen plummeted to his death, the match served not only as a tribute for Owen but also helped Bret achieve some form of closure.

“It was like a breaking point to move on,” admitted Hart. “I wanted to go back to Kansas City and give the fans a good match. I never blamed the city or the fans or the building.”

Looking back at the match, Hart counts it among the many of his highlights in his storied career.

“I couldn’t have picked a better guy to work with,” stated Hart. “It was a throwback to what we respect about wrestling. It’ll go down as my favorite of all time.”

“You always second guess, wondering if you could have done a little more. When I saw it the next day I was so happy it came out as well as it did. I wouldn’t change a thing.”

While Bret was advised by lawyers and his handlers to not comment on Vince McMahon, brother-in-law Davey Boy Smith or the pending Owen Hart lawsuit, he did talk about the almost-finished documentary of Owen Hart from High Road Productions, the same production company that produced the award-winning Hitman Hart: Wrestling With Shadows documentary.

Scheduled to air on TVO on November 3rd, and on A&E on November 16th, Hart is confident the documentary will properly chronicle the life of his brother.

“I tried to be as helpful as I could. I have a tremendous respect and high regards for High Road and how they do stuff. They’re first rate.”