Where does one start when recounting the most amazing story of Bob ‘Legs’ Langevin?

Well, since this is a wrestling site, the starting point will be in the squared circle before moving on to prime ministers, governor generals, the police, movie stars and the Pope.

Langevin wrestled for 38 years, and by his estimate, had 5,672 matches, and went around the world three times. 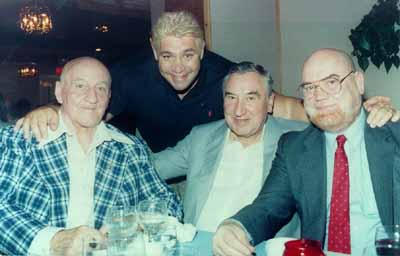 “I wrestled Lou Thesz in Hawaii. I didn’t win though,” said Langevin in an interview with SLAM! Wrestling at the Rougeaus’ February 1999 show in Montreal. “I faced [Killer] Kowalski, I faced Yvon Robert, then I wrestled Jim Londos. I even wrestled Stranger Lewis in New York.” In 1950, he even wrestled former world boxing champion Joe Louis on three occasions.

“When you make that many bouts, you have to meet all these guys!” he laughed.

Born in Magog, Quebec, Langevin was orphaned at age 4, and lived until age 7 in an orphanage run by nuns. He worked on farms until he was 14 and then got a job at Dominion Textiles.

But it was a job at the Dow Brewery, carrying cases of beer, that made his physique. 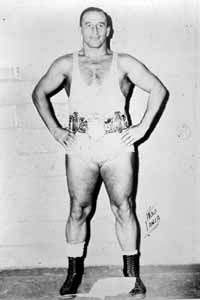 “I built my legs by squatting. Taking the case of beer down and up,” he explained. At 16, he started to learn amateur wrestling. Many people encouraged him to give the pro game a try. Langevin saw Yvon Robert wrestling, and decided to try it himself.

Borrowing money from his sister, he spent a year training with Yvon Robert, Leo Lefebvre and Lou Gagnon. Then he completed his training with Frank Sexton at the Montreal YMCA.

Beginning on the Quebec circuit, it didn’t take him long to realize that his given name of Florian wouldn’t fly. So he became Bob Langevin. ‘Legs’ followed not too long after.

Langevin explained how his nickname came about.

“There used to be a champion wrestler. He used the airplane scissors for hi s finish. It was Jim Browning. He used to be champion,” he said. “I was wrestling Toronto. I had strong legs because, in the United States, I used to split a bag of flour by squeezing with my legs. He thought that I had good legs to make his hold. So, he showed me how to do it. The first time he showed it to me, I did it perfectly, the hold that he was doing. That’s when the name came — Bob ‘Legs’ Langevin — because I had very, very strong legs. And I was the only one in the world then to do this hold. When my career finished, the hold finished with me, because no one else could do it.”

The legendary wrestler likes to bring up the story of how, when he was young, a fortune teller told him that he would never travel much. One very wrong prediction.

“I enjoyed travelling very much, from one town to another. I don’t know if it’s because I was good, or whatever I was doing, [but] I could go to any territory. When I had finished in one, I could to another one, the promoter was giving the okay,” Langevin recalled.

In Canada and the United States, he was a bad guy. But in Europe, he was a good guy — and even appeared in a few films with stars like Marlene Dietrich, Charles Laughton and Douglas Fairbanks Jr.

“To me, to be more popular with the people, I like better to be a nice guy” Langevin said. “Because what made me good with them was on account of my legs. For the hold that I was doing that no one else could do.”

At age 19 in St. Jerome, Quebec, he was attacked by a fan with a piece of wire. The attack left him impotent. Still, he insists that he received many marriage proposals over the years, despite his injury.

During the Second World War, he was hired as a policeman on the murder squad with the Quebec Provincial Police. After getting out of policing after the war, his wrestling schedule lessened a bit. 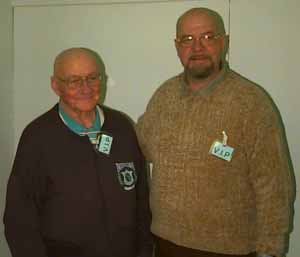 Instead, Langevin took a young wrestler by the name of Edouard Carpentier under his wing, and became his manager. He also owned a nightclub, and got involved in bodyguard work, and politics for the Quebec Liberals.

Perhaps you have heard of some of the people he served as bodyguard to: former Prime Minister of Canada, Louis St. Laurent; Elizabeth Taylor and Richard Burton; Princess Soroya, wife of the Shah of Iran.

In 1966, at the age of 51, he life changed drastically. Langevin was diagnosed with cancer, and had an urgent colostomy, which removed part of his intestines and colon, and left his powerful legs paralysed. It took seven months of physiotherapy and much pain to be able to walk on his own again.

Langevin even tried to commit suicide twice, depressed because he was no longer the strapping, muscular wrestler known around the world. The operation aged him, and changed his life forever. He can joke about it now, saying of the suicide attempts that “God didn’t want me in Hell either.”

One saviour came in the form of Johnny Rougeau, who ironically, was to die of cancer himself in 1983. Rougeau was the promoter in Montreal at the time.

“[Rougeau] said you’re going to promote, and I’m going to wrestle. So I started promoting at Centre Paul Sauvé,” Langevin explained. He later filled a similar role for promoter Eddie Quinn. It was never his money promoting the shows, but it was his face in front of the crowds. At its peak, the Montreal-based promotion ran about 23 towns in Quebec. Langevin was promoter to some degree in Montreal until about 1990, when the Centre Paul Sauvé was closed.

At about the same time he got involved again with wrestling, a priest encouraged him to tell other people about his battles with cancer and suicide. Langevin found that he was in an unique position to be able to help others.

Langevin became involved with various Ileostomy-Colostomy Associations, and the Canadian Cancer Society, and served on the board at St. Luke’s Hospital in Montreal. He also visited thousands of patients in hospitals, convalescent homes and private houses.

In 1973, he took the esterostomy therapy course at the Centre Hospitalier Universitaire de Sherbrooke and has since helped in many operations, preparing patients, marking for the doctor where to operate. After the operation, he helps with the rehabilitations and re-visits patients during their recovery.

Needless to say, Langevin’s battles with cancer, and determination to help others have not gone unrecognized.

“In Canada, I’m the most-decorated person because I have the Order of Canada, and I was decorated by the Queen,” Langevin told SLAM! Indeed, Langevin received a Silver Medal in 1977 during the Queen’s Jubilee, has been honoured by the Canadian Cancer Society, received the ‘Vraie-Vie’, the highest honour given to volunteers, from the federal government. And on May 6, 1988, he received the Order of Canada from then-governor general Jeanne Sauve. In September 1995, the WWF honoured him (and Omer Marchessault) at a show in Montreal, and Jacques and Raymond Rougeau presented Langevin with a plaque in mid-ring. The Illeostomy and Colostomy Association of Montreal has even created The Florian ‘Bob’ Langevin Trophy in his honour.

But, it is the January 1994 papal blessing from Pope John-Paul II that stands out for Langevin.

Wrestling has been good to Langevin, and he still has a special place in his heart for it.

He was honoured that Jacques Rougeau Jr. gave him tickets to come to his February show.

Langevin was asked his impression of today’s wrestling “There’s so much difference,” he replied. “Sometimes I don’t approve. But I think that it must be good because there’s more people that watch it than before.”

He wishes that wrestling in general honoured its oldtimers more, like they do in other sports. But he also recognizes that “there’s too much politics” for it to ever happen.

“To me, all my life, I did the best I could. I was well-liked, a villain or not a villain. The people liked to see me,” Legs Langevin concluded. “Every wrestler, to be a good wrestler, he’s got to be a little bit [of a] psychologist, because you build your people up and then there’s a limit to it. What makes a great wrestler is that he knows when the limit, how far he can go to please the people.”

And in Langevin’s case, he took it to even greater heights once outside the ring.

I never saw Legs wrestle, at least not professionally.
I never saw any of the wrestlers he named wrestle either.
But I have seen his battle with suicide up close and in person. I battled it myself. He battled it for a semblance of a reason at least, medical problems beyond most peoples ability to cope. I battled it as pure depression.
But you will see that for Florian and myself, it was a tag team effort with the Lord in our corners and we have both come out the other side victorious. He shares his life with countless others and deserves every blessing heaped upon him.
I am just starting my journey into professional wrestling and I will use it as a means to share my blessings with the world. After all it’s hard not to listen when your in a side headlock!
I hope you read this “Legs”. You inspire me and further strengthen my faith.
May God Bless You “Legs”
Guy McDowell