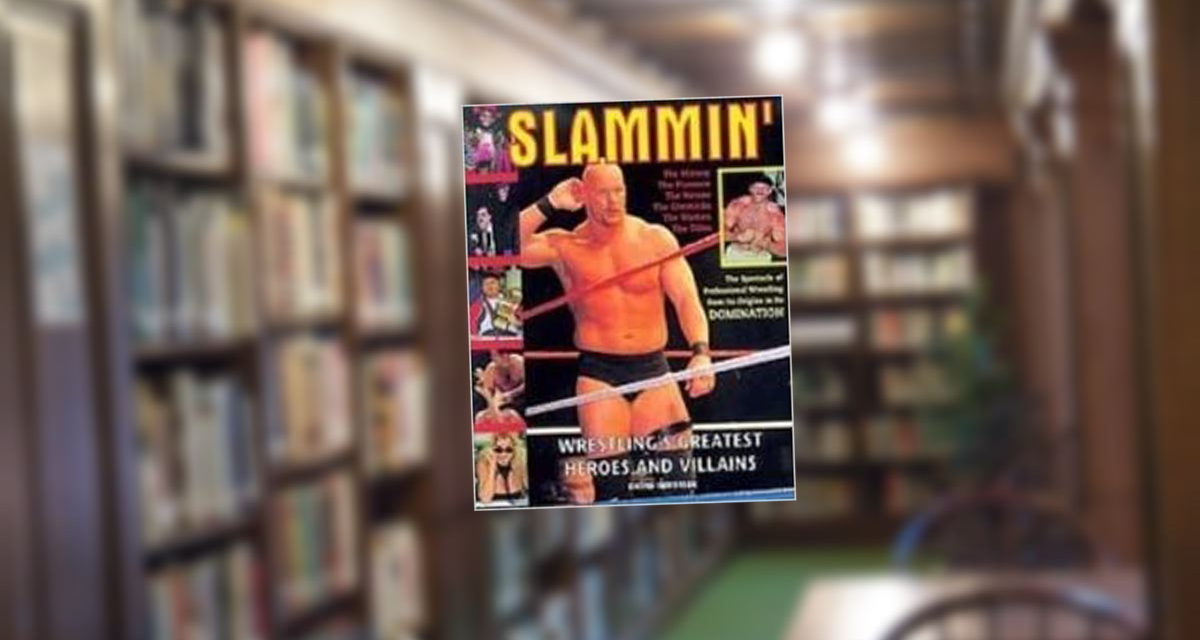 It’s a common lament from fans – why aren’t there more books about wrestling?

I’ve lived with that frustration during my 15 years as fan and as a reporter. There’s something about picking up a book that makes all the facts seem more real, more trustworthy than a WWF program, a magazine or the Internet.

And so it was with excitement that I finally received my review copy of SLAMMIN’: Wrestling’s Greatest Heroes and Villains, by David Hofstede after bugging ECW Press off and on for 10 months.

Weighing in at a decent 251 pages, it’s a good size book, with a nice cover with some cool photos. But once inside, those photos don’t really matchup. On the front, besides the typical big names like Stone Cold Steve Austin, The Undertaker, Sable and Randy Savage, there’s Jesse “The Body” Ventura, Bruno Sammartino and Owen Hart. Ventura smacks of opportunism – he’s the governor of Minnesota now – but there’s no bio inside on him. Ditto for Sammartino. As for Owen Hart, this book went to press just after his death, so again he probably got put on the cover as a last minute thing. But at least his bio inside is excellent.

The back cover is equally perplexing – why are Cyndi Lauper and Lou Albano there, let alone Junkyard Dog and Bobo Brazil?

I complain about those photos, yet once inside, there is a distinct lack of pictures. And none in colour.

The best way to describe SLAMMIN’: Wrestling’s Greatest Heroes and Villains is to call it a here-and-now book. All the bios – which are excellent, thorough and complete – are of today’s stars like Kevin Nash, Chris Jericho and Hunter Hearst Helmsley. It brought me to thinking about those George Napolitano/Bert Randolph Sugar books from the mid-eighties, when Hulkamania ruled the world. You know, The Pictorial History of Wrestling: The Good, The Bad and The Ugly and Wrestling’s Great Grudge Matches, which had bios on the stars of the day like Cowboy Bob Orton, Superfly Snuka and Superstar Billy Graham. (It also had tons of photos, which I know for a fact, because my brother and I cut most of them out!)

Those books are a charming relic of the past, and reminder of who was a big star at the time. Plus, it’s a decent resource today, if you can get past all the simplistic story lines and lack of true facts about a wrestler’s upbringing — like claiming straight-faced that The Missing Link is a true wildman, and not a decent gent from Ontario named Dewey Robertson.

I think that SLAMMIN’ will probably stand the test of time better. (For one, none of the inside photos are worth cutting out.) The facts are better and not a direct company line. I can see myself referring to it for information about the stars of the 1990s. It’s a good book, but to be honest, I didn’t actually learn that much about the stars in the book. But then I’m not your average fan.

Sure, it could have been better by including more interviews with wrestlers, more photos and better copy editing, but that all comes down to what I said in my opening paragraph. Perhaps if there were more books about wrestling, there would be more copy editors better prepared to edit the books that celebrate the twisted world of pro wrestling.