El Fuego brings the fire to the ring

Imagine time on the wrestling circuit inspiring someone to go back to school.

Rob Etcheverria, better known as the AWF champion El Fuego, found himself fascinated with the way that wrestlers treated their aches and pains on the road, the little things they did to pop each other’s backs or unkink the kinked-up. 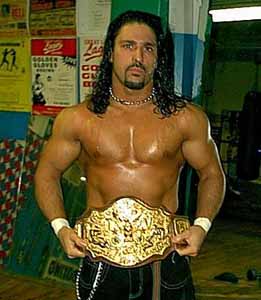 So he went back to school to learn to be a massage therapist. “[Wrestling] got me interested in the whole massage field,” explained Etcheverria to SLAM! Wrestling. “Now all the guys come to me after the match!”

Etcheverria, who was born in Uruguay but moved with his parents to Toronto when he was four, isn’t totally enamoured with a career in pro wrestling. There was a time when he first broke in, back in 1991 under the tutelage of Ron Hutchison and Sweet Daddy Siki at the famed Sully’s Gym, that he thought wrestling would be his life. Instead he’s more than happy now to have it as somewhat of a hobby, just wrestling out of loyalty for the Hutchison-led AWF promotion.

“I’ve been doing this for a while,” he explained. “I know I don’t sound as enthusiastic as I used too.”

On weekends, he helps out when he can at Sully’s Gym, training the next generation of graduates to follow in the footsteps of successes like Edge, Christian, Johnny Swinger and Joe E. Legend.

And when the AWF runs a show, such as this coming Sunday at Cactus Pete’s in Toronto when he fights L’artiste, he’s there to strut his stuff.

El Fuego (which means ‘the fire’) won the AWF title on Grey Cup Sunday in November 1999. The controversial Ms B Haven was the reigning champion, but lost the belt in a five-way handcuff challenge match that also featured the Squeegee Kid, Piranha and the Mysterious Mayhem. In the end, Fuego pinned former champion Squeegee Kid for the pin.

“I’m proud to think that Ron [Hutchison] thinks I can lead the promotion,” said Etcheverria.

While he was a fan of wrestling growing up in North York, he didn’t think that he would ever have a chance. “I always thought I was too small, too light,” he confessed. Then he saw Jushin ‘Thunder’ Liger fighting Chris Benoit on a WCW show. He recalled thinking that “there’s someone actually smaller than me” and was inspired to seek out Sully’s Gym, where he had trained as a teenager in boxing.

The training was definitely torture. “It really hurt the first time I took a bump in the ring,” he said, adding that the ring at Sully’s is a boxing ring, not a wrestling ring. “It got worse and worse every class.” Besides the in-ring practice, the wrestlers were expected to do tons of cardio work, including running around the gym, hundreds of sit-ups, push-ups and other exercises every session.

Besides the local shows around Toronto, Etcheverria has worked a few WWF TV spots, including matches against Owen Hart, Al Snow and Too Much, and a couple of house shows.

For over a year and a half, Etcheverria worked for Tony Condello’s IWA promotion, working tours all over Manitoba and northern Ontario. The 17-20 hour road trips to shows were horrible, he said, and the payoffs for the matches could be as little as $40. But on the flipside, he got to work against some veterans like Bad News Allen, Gerry Morrow and The Great Gama. Plus, he was there as ‘The Natural’ Don Callis (aka Cyrus) started out.