Though it is not widely acknowledged, Canada has produced a number of legendary short-statured combatants for the ‘squared circle’ over the years. One of the pioneers of the midget ranks, Frenchy Lamonte, certainly qualifies as one of the all-time greats of the sport.

As a child, Roland Barriault would attend matches with his mother when the maulers would appear in his hometown of Sudbury. By age eight, he had already decided that the wrestling game was in his future, telling his mother “I’m gonna be a dirty one,” he recalls with a chuckle.

Frenchy has appeared around the world over the past 36 years and is still active today, most recently appearing for Winnipeg promoter, Tony Condello. He lists Sky Low Low and Fuzzy Cupid as his favorite opponents and his favorite promoter is former San Francisco mat impresario, Roy Shire, under whom he once earned $3,500 for a single performance in the Cow Palace. Lamonte was also World Midget champion in 1974. 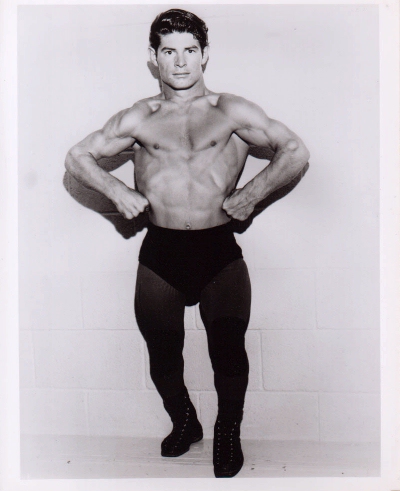 He was trained by Lord Littlebrook and made his debut in Havelock, Ontario in 1963.

Lamonte grows very serious as he admits that as a child, he did not believe in “giants”, and that he was legitimately frightened when on a tour of France, he was greeted at the airport by Andre the Giant. “I was as tall as his knees,” he relates. The two went on to become close friends after the initial shock, and fear, wore off.

Away from the ring, Frenchy has remained in the public eye having made a handful of movie appearances including “Days of Heaven” with Richard Gere and securing a role in last year’s movie on the life of Jesse Ventura. In addition to that, he has also been featured in the Guinness Book of World Records as the “World’s Strongest Midget” after being discovered by Ben Weider in a Montreal gym.

“I squatted two full-size wrestlers (One of which was Johnny Rougeau),” boasts the legendary grappler. “Ben Weider said he’d never seen anything like that before.”

In 1982, Lamonte began to play basketball with Phil Watson’s Canadian Half-Pints midget basketball team. While touring with the team, Frenchy believes that he may have played ball at almost every aboriginal community in Canada, where he has made many lasting friendships.

In the dressing room, Frenchy Lamonte can be found either at the centre of a hoard of burly matmen, regaling all with tales of his incredible career, or quietly sketching landscapes on Styrofoam cups, which he offers to friends and fans as a memento.