Terry Funk announced his retirement on The Fan 590 radio station on Saturday night.

Then on Sunday night, after his match against Sabu on the AWF’s One Last Dance show, he qualified the statement for SLAM! Wrestling. 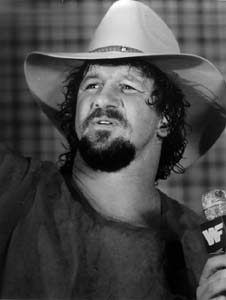 “I’ve kind of geared it down in the last six months,” said the legendary Funk, his face caked with dry blood after beating Sabu with a DDT onto a chair.

Besides the beatings in the ring, Funk has recently had a scare with Hepititis A, and his liver went bad on him. But he insists all is okay now.

However, despite the retirement announcement, he has given thought to donning the boots at least one more time.

Though wrestling in five decades leaves Funk a whole decade short of Gordie Howe’s six decades in hockey, don’t rule him out. Funk has retired more than once before. The last big time was a retirement show in 1997 in his hometown of Amarillo, Texas where he faced Bret ‘Hitman’ Hart. There was also the memorable return from retirement to feud with Ric Flair over the NWA title in the late ’80s.

On Sunday’s show at Diamonds Cabaret in Mississauga, Ontario, Funk got the worst of it in his match against Sabu. The Bombay Madman used a metal spike, multiple chairshots, and a high-flying arsenal of moves in his quest for victory.

And yet, Funk hand-chose Sabu for his last match, and ensured that the youngster honoured his commitment with the AWF and missed an ECW show.

“He’s not really given his due, his credit from a lot of wrestling critiquers throughout the country. I just think he’s as good as you can get in this business right now. He deserves one of those high dollar contracts. I think he does. I think he’s that good of a performer.”

Other results from the AWF show: