Hit by an Anvil 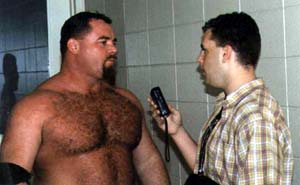 Former WWF tag team champion Jim ‘The Anvil’ Neidhart continued his tour of the Canadian independents with a match for the AWF in St. Catharines. SLAM! Wrestling got a few minutes to pick the mind of the former WWF and WCW star.

The Anvil had a successful career in the NFL, when he was powerbombed into the world of pro wrestling. “I was with the Dallas Cowboys, and I was released,” said Neidhart. “Then I went to San Diego, and a promoter out there that Roddy Piper was working for thought I had potential for professional wrestling.”

“So, I gave it a try, and this promoter in Los Angeles sent me to meet a man named Stu Hart. Thus it started.”

After wrestling for Stampede Wrestling out of Calgary, Neidhart got a call from the WWF and immediately jumped at the chance. Six months later, he was in a successful tag team as The Hart Foundation with Bret ‘Hitman’ Hart, and managed by The Mouth of the South Jimmy Hart. The team went on to win the Federation’s tag titles on two occasion, but after awhile the two were sent on their separate ways.

“Well, you know, a tag team can’t last forever,” Neidhart said. “There were different situations being offered and that’s the way it went, but they brought back the Hart Foundation a little while later anyway.”

The Anvil is referring to 1997’s rulebreaking, American-hating version of The Hart Foundation. He insisted that bashing America wasn’t a problem for him or his partners. After mentioning that Bret Hart had said that it bothered him saying those things about the U.S., Neidhart offered his take on the situation.

“Well that’s what he says. He doesn’t really like America, I don’t think,” said Neidhart. “He is Canadian through and through. Actually Bret had a good point. I live in Calgary, Canada now and the more I see what’s going on around the world, the more I really do like Canada. … You don’t have a lot of slums and ghettos like the United States does. The list goes on and on.”

The 1997 Survivor Series pretty much put an end to The Hart Foundation. Everyone knows what went down that fateful night in Montreal, but Neidhart said that hatred between Shawn Michaels and Bret Hart started long before the two took to the ring that night.

“A long time ago Bret and I used to tag against Shawn and his partner, what was his name?,” Anvil stumbled, and was offered the answer. “Right, Marty Janetty, the Rockers. We had some pretty heated battles, but you know, Shawn Michaels is a little funny. You never know if you can trust him or not.”

Were there any cheapshots in the matches?

“Yeah, but they were kind of smaller, and they were just a little sneaky. They were pretty crafty, you had to keep your eyes on them, but Shawn especially.”

Shortly after the WWF Survivor Series, Neidhart took a contract with the rapidly-expanding WCW. He insisted that it was only because they offered him “three times as much money” and not because there was hard feelings with WWF honcho Vince McMahon. One gets the impression that he didn’t enjoy his time in Atlanta.

“It’s a lot different than wrestling in the WWF. You’re doing a lot of TV, and your matches aren’t going very long. You might go two minutes, you might go six months or ten minutes. It’s a broadcasting company, it’s not a wrestling company like the WWF, so they do things a little differently and it takes a while to get oriented.”

After all this time, the one thing that the Anvil is still famous for is his cackling laugh at the end of every interview. He says it was partially invented as a time-keeping device so they didn’t go over the time limit for the pre-match interviews.

“Half the time I was laughing about the interview and half the time I was trying to…you had to be right on time, you’ve got 15, 45 seconds, a minute and a half, so that laugh at the end gets you right to the second. It was a time keeping thing.”

He says that now he’d like to get another tag situation, and that if the right contract was offered, he would go back to the WWF in a second.

After the interview with SLAM! Wrestling, The Anvil went on to lose a triangle match to Mr. U.S.A. Tony Atlas and Jimmy ‘Superfly’ Snuka.