He was a Brute before becoming Klondike Bill 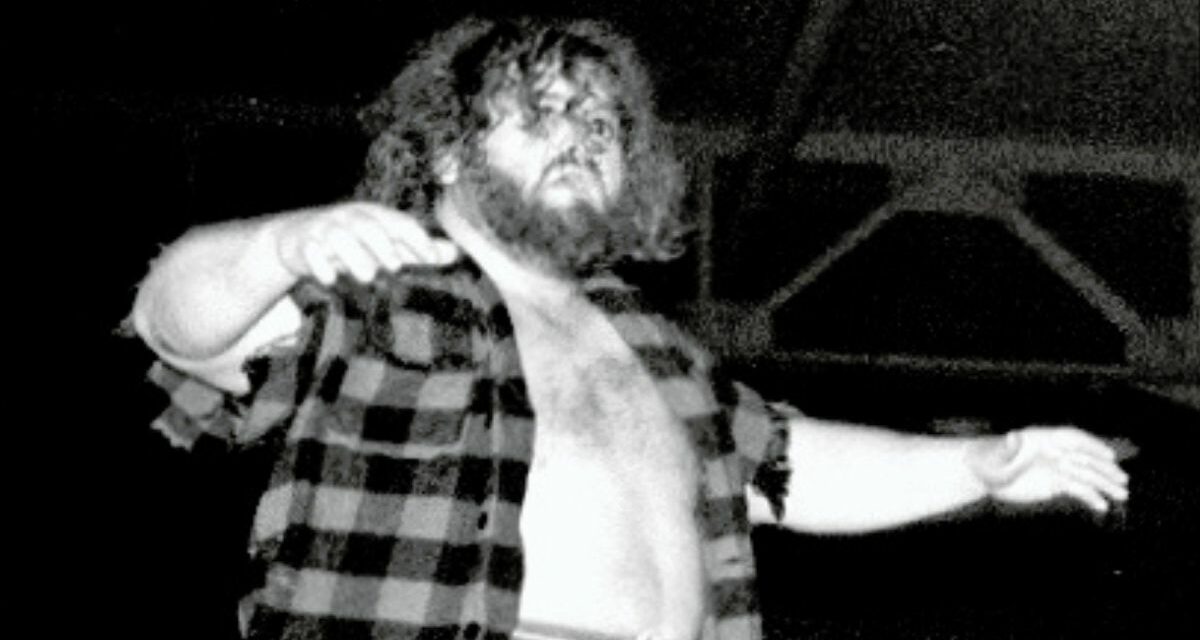 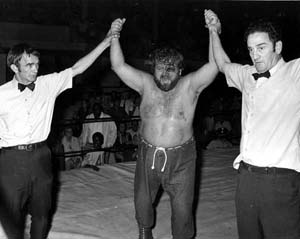 With over 40 years in the wrestling business, Klondike Bill has seen a bit of everything.

From main events to setting up rings, he is a legend tending to the diverse WCW roster as a road agent.

Today’s fan will probably remember Klondike Bill from the Eric Bischoff skits, when he was ‘demoted’ to setting up the ring, and Bill was his boss.

Bill Soloweyko was an accomplished amateur wrestling in Alberta in the ’50s when he decided to turn pro. By the later years of that decade and into the mid-70s, he was a star, with his big, barrel-chested physique, beard and bearhug.

“I wrestled basically as a lumberjack strong man,” said Klondike Bill at the March WCW stop in Kitchener, Ontario, for a WCW Saturday Night taping. 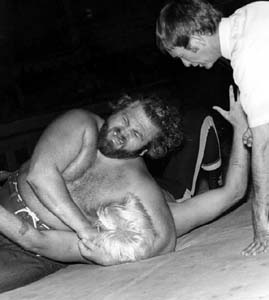 When he was clean-shaven, and feeling like a decent fellow, he would wrestle as Bill ‘The Brute’ Soloweyko, particularly early in his career. When his beard had grown, he put on his worked-in jeans, with rope belt, and headed to the ring as Klondike Bill.

His wrestling took him around the world, but Canada and the Mid-Atlantic area around Charlotte, NC were proven stomping grounds. He was also the Hawaiian champion in 1968.

Klondike Bill claims not to have a favourite place to wrestle.

“Wherever the promoter gave me the best money,” was his favourite, he said. “I had no particular city I liked.”

There is a legendary story about Klondike Bill, that is told by Trail West Magazine. Amarillo, Texas is home to the Big Texan Restaurant and Opry, which offers a 72-ounce steak free of charge to any person who can eat the whole thing and all its accouterments within one hour. Well, Klondike Bill, he wolfed down TWO of the 72-ouncers in one hour.

Bulldog Brower and Gene Kiniski stand out for him as the toughest opponents. He was successful in tag teams with Whipper Billy Watson (Canadian tag titles out of Toronto), Nelson Royal (Mid-Atlantic tag titles), Luke Brown (Ohio version of the U.S. tag titles), and Skull Murphy (All Asia champs in 1968).

His pace slowed considerably in the ’70s, and he only wrestled occasionally.

It was Jim Crockett, the Charlotte-based promoter of Mid-Atlantic and the main circuit of NWA that hired him as a ring coordinator, building fences for ringside, maintaining and building rings.

When Ted Turner bought the rights to the promotion in 1987, and created WCW, Klondike Bill stayed on and became more of a road agent.

So next time you are at a WCW event, be sure to say hi to one of the legends of the sport. He’s more than happy to remember old times – and more importantly, enjoys being remembered.

It was 9 am this morning when my mother walked into my US History Classroom at Garinger H.S. in Charlotte, NC. “Greg”, she said with that voice of hers that let me know something was wrong, “Bill just passed away.” There I stood in front of 27 of my students a grown man, a teacher, weeping like a child.
There was no question in my mind who she was talking about; it was good ol’ Klondike. Mom is hairdresser and for as long as I can remember she has done Adrienne Soloweyko’s hair on Friday Mornings. I remember as a child begging to go to work with her so I could see Bill. Bill would always tell me what was going on backstage in the arenas; he made me feel very special. As a graduation gift he snuck me backstage at a house show to meet my hero Nature Boy Ric Flair, little did I know at the time that it was Bill who was my real hero.
I have seen Bill over the past few months fight the fight of his life, there were good days and bad, but he was always in the best of spirits. I went to visit him Sunday. Little did I know that on that day I would speak my last words to him. I don’t remember what all I said I just remember praying, “God help Bill fight the good fight”. Two days later the fight was over.
Bill fought the good fight; he was a good and decent man, a man who was loved dearly by his family and friends. To know Bill was to love him, there will never be another like him. I have met many people in the business over the years and not a one had a bad thing to say about the big guy.
A few weeks ago when Nitro was in Charlotte I sat a few rows back from the front across from the Flair family. I’ve been to tons of wrestling shows but never before been compelled to hold up one of those signs. That night I made a small sign, it said, “Klondike We Miss You”. I waved that sign for the entire show as if Bill were going to come out and wrestle a match just for me. Later in the show a few members of the crew moved me to the front so that the camera would shoot the sign as the main eventers entered the ring. I have never been so proud in my life, because Klondike Bill is my World’s Champion.
You will be missed
Gregory A. Davidson