Not a smooth, easy road for E.Z. Ryder 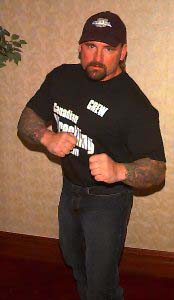 Back in the late 1980s, Curtis Rothenberger went to a small Winnipeg wrestling show with some buddies and had a good time. He met the promoter and joked that he wanted to become a referee. The two exchanged phone numbers.

Later, Rothenberger called that promoter, and went down to see how things were done.

The promoter, Canadian Hall of Famer Tony Condello, told him to forget refereeing and try wrestling.

After more than eight years on the indy circuit around Winnipeg, he has his shot at fame at the NWA 50th Anniversary Show on October 24, 1998 when he faces Mr. Gillis from ECCW and Slater Jeffries from Maple Leaf Wrestling in a triple threat match for the re-activated NWA Canadian title.

“It’s a great honor just to be considered a possibility [to hold the belt],” he told SLAM! Wrestling in a phone interview from Winnipeg. “It’s the biggest [show] I’ve ever been to.”

“I tend to wrestle a very basic, solid match,” he said. A dropkick is about as high off the ground as he gets, but can brawl with the best of them.

By looking at him, one might assume that he’s a heel, but E.Z. Ryder has always been a babyface. He said that was intentional, wanting to play with people’s heads. Unlike today where “it seems everyone’s a heel,” he was schooled at a time when a good guy was a good guy and a bad guy was a bad guy.

During the day, he works as a local high school as a special education teacher. The wrestling persona means “the kids listen to me,” he joked.

At the CWF shows, he also finds himself teaching the next generation of local wrestlers, such as his current tag partner Darren Daulton, who he describes as “a real good prospect.”

Though he’s not a household name, he has wrestled a few. He once beat The Natural (aka Don Callis, the WWF’s Jackyl) for the West Four Wrestling Alliance Heavyweight Title, has wrestled former world champs Rick Martel and Gene Kiniski, and legends Baron von Raschke and Jim Brunzell. He is not concerned too much about his future in wrestling. A ‘whatever happens, happens’ attitude.

I wrestled EZ Ryder in Winnipeg in 1995 and he definitely has the most devastating fireman’s carry in the business!
Steve Stryker, Local Winnipeg wrestler

I saw E.Z. Ryder for the first time on WWF Los SuperAstros in January 1999. He wrestled the huge Giant Silva. Silva dominated the match, and Ryder did not get one lick of offense. Silva ended his misery with a chokeslam.
Mario Ortega, Danville, CA

In Mid October 1999, I saw EZ Ryder on WWF Jakked. At first I didn’t know who he was, and thought that he just some jobber, since he didn’t even get a chance of ANY offense. Later I remembered that I saw him in the SLAM! Champions page. Why isn’t the WWF using this NWA Champion at all? Is he just some jobber? I think not!!!
London, Ontario

E.Z. and I had some of the funnest, four step matches that I can remember! I got to know his snake well. One time after I had started using my pot-bellied pig as part of my gimmick the snake was thrown on me during a match, and this thing went crazy! It must have smelled the pig on my cover-alls and started to wrap it self around my head and neck! E.Z. made the big save and I am still around to talk about it! Thank-you for all the fun E.Z.!
Sincerely Jethro Hawg. (Randy Unrau)