It didn’t take long to realize that two hours with Terry Funk were not going to be enough.

I’m not sure that two days would even be enough to hear all Funk’s stories about his 34 years in wrestling — plus all the years growing up with a wrestler for a father. 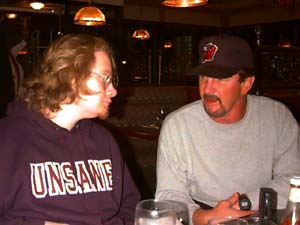 Funk, dressed in a grey Henley shirt, baseball cap, and hair in a ponytail, sat down with Chris Gramlich and I on Saturday night at The Bounty restaurant in Mississauga, along with Sully’s Gym trainer Rod Boudreau, AWF owner Chris Mulchinock and his wife Dyana.

I kind of wish that Louis Malle had been there to film it — My Dinner With Terry.

As it was, Gramlich taped the interview, and is working on a story about Funk — from his early days to his hardcore days, to what’s in store next. Needless to say, his deadline isn’t tomorrow.

But just sitting there, hearing a true legend of wrestling tell stories was something.

Over dinner — Funk had a BLT, and later got into the chewing tobacco — he told us crazy stories that spanned the globe. Adrian Adonis eating a 6-foot sub almost by himself, the Iron Sheik’s paranoia, Kerry von Erich’s problems. And his nickname for Abdullah the Butcher, who he faced Sunday afternoon at the AWF show, is ‘Spanky’. I wish that we had taped that part too, but it was not exactly an ‘on the record’ discussion.

That said, however, Funk does not hold anything back in his interview with SLAM! Wrestling.

He doesn’t like Ric Flair or Hulk Hogan. He loves to make money.

Funk may be proud that he doesn’t “hang on to the past,” but for Gramlich and I, it’s a night that we will always hang on to.

And I’m probably looking forward to reading Gramlich’s story more than you are!

Results from Sunday’s AWF show in Toronto at The Guverment: