Catching up with Puppy Dog Peloquin 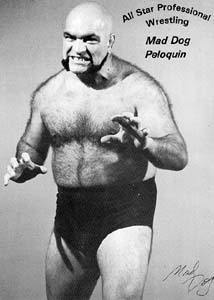 During the late 1970s and early 1980s, Puppy Dog Peloquin was a mainstay on AWA TV shows.

But it took Joe LeDuc to terrify him.

“The first time on TV I had to wrestle against Joe LeDuc from Montreal. Big, mean lumberjack,” remembered Peloquin in December 1998 down the line from his Winnipeg home. “When I was asked to wrestle him on TV I was really sweating that night!”

Peloquin started to learn to wrestle in 1971, and trained with Tony Condello.

He had been a regular at the old Winnipeg Arena and always wanted to be a wrestle.

But it wasn’t until he hit 29 years of age that he learned the ropes.

“I started when most guys were quitting,” he joked.

Peloquin had a “husky build” that “fit in with what the promoter wanted to see.” His main moves were the camel clutch and step-over-toe-hold. 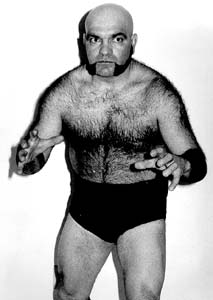 He beat his mentor and trainer Tony Condello for the title. “He was the champion there for a few years. I kept telling him, ‘I’m tired of seeing you as the champion — it’s my chance now!'”

Always a Winnipegger, Peloquin hung up the boots in 1993. Bad knees and a bad shoulder were the two greatest factors. “We didn’t have the luxury of padding on the floor like the way the big corporations do today.”

The family connections are still going in the wrestling world, however. His cousin’s son is Corey Peloquin, better known as Bobby Bolton and Chi Chi Cruz.

Thanks to Guy Peloquin and central Canada’s leading wrestling expert, Vern May of Canadian Wrestle-Media for their help with this bio.