Revenge is too sweeeet! 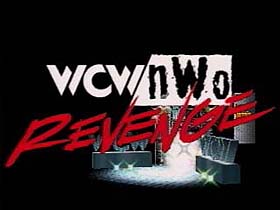 Have you ever wanted to brain Eric Bischoff with a steel chair? I know I have. How about win the WCW tag belts as Bret Hart and Jim Niedhart, the original Hart Foundation? Wouldn’t you just like to pin Goldberg’s shoulders to the mat effectively ending his unbeaten streak?

WCW / nWo Revenge – THQ’s new wrestling game for the Nintendo 64 system – lets you do all that without the bother of lacing up wrestling boots or leaving the comfort of your living room.

Once past the energizing opening sequence (Sting’s switch to nWo Wolf Pack), players have the option of designating their bout as a Championship, Exhibition, Special singles or tag team match. With that decided, a unique feature kicks in. Revenge offers six settings so you can wrestle in a Monday Night Nitro, Souled Out, SuperBrawl, Bash At The Beach, Halloween Havoc or Starrcade setting.

Don’t get any crazy Public Enemy-like ideas running through that diseased brain of yours. Barring the ringside fencing none of the components are interactive. You can’t whip someone through the Bash At The Beach palm trees nor can you slam your opponent through the Starrcade video wall.

Get real. This is WCW afterall not ECW.

Continuing on setting up the game there’s a diverse roster of 44 WCW superstars and 12 fictional creations. Main eventers such as Sting and Hollywood Hogan to perennial jobbers like Lodi and Fit Finley are yours to command. Each popular WCW wrestling faction – nWo Hollywood, nWo Wolf Pack, The Flock and true, blue WCW grapplers – are accurately represented within reason. For example…Scott Steiner wears the white and black but Stevie Ray (who didn’t turn nWo Hollywood until a short time ago) is still listed under WCW.

In picking your grappler another splendid option is available. Let’s suppose you don’t appreciate Hollywood Hogan’s heel turn. You yearn for the days of a face Hogan saying his prayers and eating his sterio…ooops…I mean vitamins. THQ’s answer is…No Problem-o!

As you have the ability to cycle through three to four character costume changes, you can reverse Hogan’s decision putting him back in the red and yellow. The process works for various wrestlers. Kevin Nash can change into his Outsiders garb. Sting is able to revert back to his carefree, blond-haired incarnation. For those wrestlers like Glacier, Goldberg and Dean Malenko who haven’t radically altered their appearance, there’s different color schemes.

The costume change preference is also useful in creating your own wrestlers. Your creation will be “saved” over the wrestler you’re altering but don’t panic. You can return to the default settings whenever you wish.

The appearances of the wrestlers themselves is the game’s biggest improvement. Remember how DDP resembled a waddling Pillsbury Dough Boy in World Tour? Was that an embarrassment or what? In Revenge, the graphics are incredibly realistic. The icing on the cake being each character’s unique mannerisms and facial features. Elizabeth covers her eyes whenever Eric Bischoff takes a severe beating. The Giant steps over the top rope to enter and exit the ring. Chris Benoit draws his thumb across his throat before locking on the dreaded Crippler Crossface.

Once you’ve got the right outfit it’s time to…woooo!…walk that aisle. The programmers have gone that extra mile to really duplicate each wrestler’s ring entrance. Diamond Dallas Page does his “Bang!” thingy. Hogan plays air guitar. Raven gives his crucifixion salute then slumps down into a corner. It’s the real deal. Except for one substantial omission. No wrestler’s theme music is heard. Canned Nitro and WCW music are played as substitutes.

Revenge’s gameplay is the same as its predecessor World Tour. You’ve got your standard moves, your special moves and counter attacks. The first to lock-up gains the advantage. A player builds up their “spirit meter” by taunting opponents and successfully executing moves.

For hardcore players like myself, weapons (plunder) such as chairs, bats and garbage cans are there for the taking if you reach into the ringside crowd. Parents worried about the violent nature of the game can manipulate the “realism” option toggling the bloodshed on or off.

Also built into the cartridge is sufficient memory to save your costume changes, your title wins and high scores. However, you cannot save a game midway through a title hunt. It’s either all or nothing. If you are lucky enough to win the championship belts, secret wrestlers will be added to your roster. To further enhance the game’s longevity, battle royal (Royal Rumble format) and handicap match modes are included.

Revenge’s main shortcoming is the number of special attacks at your disposal. The rise and fall of the “spirit meter” determines your ability to use “weak” or “strong” holds so in especially difficult bouts you may find yourself performing the same basic maneuvers again and again until your “spirit” increases. The process can be quite frustrating.

Based on the WCW / nWo World Tour game engine, THQ refined the initial format directing much of their creative energy to Revenge’s “replay factor”. No one wants to shell out hard-earned dough for a video game only to exhaust its capabilities inside of a month. That isn’t money well spent. With innumerable options keeping the game both interesting and fresh, Revenge will soon have that controller melded into the palm of your hand.

THQ really put their heads together on this one designing a cartridge that has a longer life than some WCW storylines. Die-hard wrestling fans rejoice! THQ’s designers and programmers respectfully devoted themselves to this project incorporating the finer points that make playing Revenge such a satisfying experience. Wrestling fans will be awestruck by THQ’s superb attention to detail.