CHERRY HILL, NJ — Even thought the National Wrestling Alliance is not in its glory years, it is still capable of showing off.

This past weekend, the NWA held a 50th Anniversary convention and show in Cherry Hill, New Jersey to celebrate all things wrestling.

For a fan, the best part was meeting and mingling with wrestlers. Or maybe browsing through the two dozen merchandise tables selling everything from T-shirts to memorabilia to wrestling masks to videos. 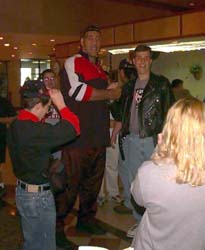 By holding the convention in the Cherry Hill Hilton — a very upscale joint to say the least — the NWA conjured up a grand vision. And later that night, they paraded today’s NWA talent during a show in the Grand Ballroom.

Current NWA champion Dan Severn was front and centre, as well he should be. Severn was everywhere: mingling with fans, in the NWA members meetings, hawking his merchandise, showing off his titles, and even in the ring, where he made WWFer Steve Regal submit in 31:10 of the co-main event.

The NWA currently boasts 25 member promotions, but few in North America could be considered major players when compared to the WWF, WCW or even ECW. Yet, one they all come together for one event, some big names are involved, including many of tomorrow’s stars.

The WWF lent some of their lesser stars — Regal, The Headbangers — for matches, and a whole bunch of recent arrivals and trainees from the Funking Dojo for a Battle Royale. Dr. Death Steve Williams won the thing, finally tossing out Tiger Ali Singh. Others in the match included dojo teacher Dr. Tom Prichard, former CFLer Glenn Kulka, Giant Silva, Singh’s servant Babu (who the crowd was most into), Canadian Andrew Martin, US Olympian Kurt Angle, Chris Daniels, Barry Houston and Ted Hart (who is the grandson of Stu Hart and took an amazing bump and had the cut to prove it).

Tully Blanchard was supposed to team with Barry Windham in a four corners match for the NWA World Tag Titles, but Windham no-showed and Prichard took his place. In the actual match, The Brotherhood (Erich Sbraccia & Knuckles Nelson) won the titles from The Border Patrol. Team Extreme, Kit Carson & Khris Germany, was the fourth team.

The NWA Canadian title was also decided, and E.Z. Ryder from Manitoba’s Canadian Championship Wrestling came out on top.

Since the show was held in true ECW territory, a bunch of ECW vets took part in an Extreme Rage in a Cage match as the finale of the evening’s show. The Pitbulls and Stevie Richards were there, as was Missy Hyatt and Doug Gilbert. The expected chaos resulted, though not much logic, as the Dennis Coraluzzo-led team of Gilbert, Lance Diamond, Steve Corino and Rik Ratchett won the match.

The NWA is talking about trying to do similar conventions in the future, likely in different areas of the United States and maybe even one day in Canada.