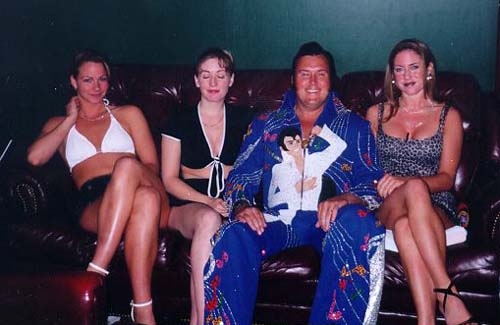 The legendary Honytonk Man answered questions from SLAM! Wrestling readers.
Fans of HTM in southern Ontario can catch him Sunday at an ICW show in LaSalle, Ontario (near Windsor) against Scott D’Amore.

Below is the fan Q&A. We’ve given credit to the readers who sent in questions.

Q: Any chance of you returning to the broadcast team (WWF) as you were a lot better on the mic than that idiot Jim Ross? [Mean Paul]
HTM: Thank you for your support. I wish I was doing the broadcast. Ross has it all to himself and his cronies, i.e. Lawler, Cornette, Doc Hendrix, and so on. I think I can bring more than just one-liners that Lawler has been repeating for the last three years. If you go back to some of the shows I did commentary on you will see that I brought energy and excitement to a dull broadcast team. You will see that Ross and Lawler stepped it up a notch when I hit the airwaves.

Q: What do you think of your nephew Brian Christopher Lawler?? And Why don’t you manage him? [LlVIN]
HTM: Brian is very talented, it is too bad he is there in the shadows of his OLD MAN, but until the “king of the joke book” is gone the boy will never have a chance. I wish I could have managed him, it would have been good for both he and I, it sure would have been better than that DEAD BILLY GUNN.

Q: Honky Tonk Man, why is it that you don’t play an active roll in the WWF. I am sure that you’d be even more popular then you are now if you did. [Gareth Lypka]
HTM: I would like to play more of a roll, but I am not one of Ross’s boys from those old NWA days in WCW when Ross had this whole talent roster in WCW, when he and Cornette were on the booking committee that damn near bankrupt the company. Ross gave Austin, Pillman, Ron Simmons, Vader, Cactus Jack, Mero, Doc Hendrix (Michael Hayes), Dustin Rhodes, Barry Windham, Too Cold Scorpio, just to name a few the first contracts in wrestling. History does repeat itself!!

Q: You were in a scenario where you were looking at ” Possible Proteges “….2 wrestlers being Billy Gunn and the other being Jesse James Armstrong now know as ” The New Age Outlaws “. You seem to have a good eye for talent. Is there a future in scouting or even managing any new or existing wrestlers? [Terry Young]
HTM: I really could care less about a manager’s roll, it is not my cup of tea.

Q: You call yourself the greatest Intercontinental Champion of all time. Which past WWF Intercontinental champions do you feel are in that category with you? [everbran]
HTM: Savage, Rude, Bret Hart, and Michaels

Q: Do you think The Rock has the qualities to become the greatest Intercontinental Champion of all time? [Craig]
HTM: No, because they do not put the IC matches as the “MAIN EVENT” on the cards anymore and that is how you achieve greatness, selling out large arenas on your own.

Q: What was it like working with the Ultimate Warrior? [Rob Sharp]
HTM: It was hard to get up in the morning knowing what you had to face that night.

Q: How did you feel after the Ultimate Warrior beat you for the IC-title in just a mere seconds? [J.Slagmolen]
HTM: It was the best for all parties. He would have been exposed as not being ring capable at the time and the shorter the better in those case, much like what they are doing with Goldberg.

Q: Did you have any previous media or public relations experience or training prior to your current position with the WWF? [Stephen Laroche]
HTM: No, it is something that comes easy for me.

Q: How can you be so upset over Jeff Jarrett using a country singer character just because you used an Elvis Presley rock n roll character as those are two different types of character? I think you’re just jealous of Jeff. [Tom]
HTM: Elvis was not in the wrestling business working in the same company at the same time as me either. Think what you will.

Q: During your reign as Intercontinental Champion, which opponent do you consider to have been your toughest challenger? [Jared Dapena]
HTM: There were so many. Every match was different. All those guys were very good and skilled at our craft. Savage was the most difficult to”deal” with and Warrior was the most unpredictable and physical, but he is fine now.

Q: Do you still keep in contact with Jimmy Hart? How did you and Jimmy Hart hook up? [Golzie]
HTM: Yes I do talk with Jimmy on ocassions. He and I talked about how to handle Goldberg and how not to handle some people in WCW. He and I conferred about doing Nitro shows on Monday nights before they ever started them. We conferred on and with Hogan on the best way for him to be presented coming into WCW a few years back.
Jimmy and I were hooked up in the late 70’s in Memphis.

Q: Just wanted to know if you ever planned on coming back to regular wrestling action in the WWF and what your thoughts are on the only WWF I/C champ that has ever even come close to being the greatest champ ever. [Theo Nia]
HTM: This pro sports and entertainment, you came only come back “when” they call you back. I answered the second part earlier.

Q: How was your relationship with Greg “The Hammer” Valentine? [Ranjit Sandhu]
HTM: Very good, Greg and I work a lot if Indie shows together.

Q: What do you think the WWF can do to stay ahead of WCW? [Paul K Chisholm]
HTM: They can’t stay ahead because they do not have the talent to stay on top. They just do not have any top guys over other than Austin and UT. Without the Mike Tyson thing in March which helped the turn, who knows where they would be now.

Q: Have you ever regretted being a professional wrestler and what is your worst and best experience, in the ring, as a wrestler? [Danny Baldwin]
HTM: There are always regrets and rewards. Injuries are the worst experiences and being in a position to be the greatest IC champ of all time was the best, along with the money!!!

Q: Honky, some people complain about how certain wrestlers who are young and talented don’t get proper pushes or aren’t made main eventers. Do you think letting the older veterans having the main event status is smart, or would you be pushing more of the younger guys? [RealDealRM]
HTM: It takes all kinds to make a good wrestling show, but the younger guys by mixing in with the vets can learn how to carry the torch.

Q: I’d just like to know one thing.. how many guitars have you smashed over people’s heads during your illustrious career? [James Ryan Patterson]
HTM: Hundreds, can’t start to count them all.

Q: How many guitars have you gone through during your wrestling career? [Steve Zwemke]
HTM: Hundreds

Q: What in your mind constitutes ideal training for a beginning wrestler? [Colford]
HTM: Complete training is very difficult, most of the guys training were never complete in all the skills, so it is hard to define ideal, what moves works for some guys will not work for others. It is something that can be acquired over time.

Q: If you could have just one more match, against any wrestler from any time or federation, who would you choose? [Dr. Placid Lasrado]
HTM: Hogan, because I owe him something that he doesn’t want me to give him. McMahon is second for the same reasons.

Q: Why did you retire? [Dr. Placid Lasrado]
HTM: I have not retired, I just don’t wrestle in the federations anymore. There is tons of matches around the world that have nothing to do with the feds.

Q: Do you think Elvis is still alive? [sglass]
HTM: In memories. He will never die, and neither will the Honky Tonk Man gimmick.

Q: Honky, who do you think is the most over-rated and most under-rated wrestler in the business? [Guthrie]
HTM: Over-rated too many to mention most are in WCW with fat contracts. Under- rated there are a bunch of them mostly WCW, but they will get the chance there. The under-rated in WWF will never get a chance.

Q: I would just like to know why you got into wrestling and music? [Trevor]
HTM: Sports and entertainment, thats all I ever wanted to do since early childhood.

Q: David Schultz brought you here and then you turned on Dr.D. As you ran away to Vancouver he chased you all the way to the coast. What do you remember of those days at the Pavilion and your relationship with David. [Bill Cubitt]
HTM: Those were some of my best times, David was like Jimmy Hart always thinking of things about the business and how to do something bigger and better. It was his idea of WRESTLEMANIA and that name for it that started it all.

Q: Going back to your Stampede Wrestling days, who where some of your favorite feuds with? ? And do you still keep in contact with Dr.D-David Shultz who you turned on because of J.R. Foley and that big wad of cash he gave you. [Dean Elguindy]
HTM: I haven’t talked Dr. D since prior to the WWF in the 80’s. I had some classic there in Stampede with all those guys, and they were very talented too.

Q: Honky You are one of the greatest entertainers in the world. I remember you coming to Stampede Wrestling and tagging up with Dr. D david schultz. You called yourselves the memphis Mafia. Is this correct. . I think you should be a commentator, your style and knowledge of wrestling would add to any of the wrestling shows. Do you know the where abouts of any of the old Stampede stars that we don’t hear of any more? Take care and remember you have brought a lot of humor and happiness to you fans. [Jason Docherty]
HTM: I don’t know what happened to them, sometimes I would ask Bret or Owen about the guys, but I don’t know where they all went.

Q: How would you describe your time spent in the AWF? [tiptoe]
HTM: Like a family reunion.

SLAM! Wrestling: Thanks be to the greatest Intercontinental Champion of all time for doing this fan interview!