On Wednesday, November 26, 1997 Greg Oliver sat down for a one hour chat with the legendary Stu Hart at the Hart House in Calgary. The first part of the interview is mainly questions sent in by readers of SLAM! Wrestling. The second part is Stu remembering wrestlers of days gone past for our Canadian Pro Wrestling Hall of Fame. Highlighted names will take you to the corresponding page in the Hall of Fame.
As always, we welcome your feedback. My apologies for not keeping track of who sent in which question.

OLIVER: What do you think of Bret in the ring?

STU: Bret’s one of the better wrestlers in the industry, proven by his box-office appeal. The fans love him and he’s very believable, reasonably serious wrestler. Not too much nonsense with him. He comes to wrestle and he wrestles. 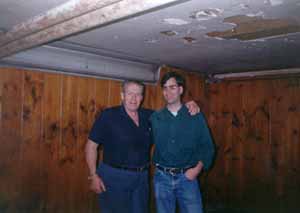 Greg Oliver with Stu Hart in The Dungeon.

OLIVER: Does he remind you of yourself when you were wrestling?

STU: I never relied on a lot of fantasy stuff. I did pretty believable work. For the most part the wrestlers and the fans believed I was giving all-out effort. I could always draw money at the box office that way too. Any of the wrestlers that worked for me, I tried to instill right in them sincere hard work without not too much fantasy. They’re leaving it to the imagination.

OLIVER: With the recent events with Bret leaving the WWF, people want to know how you feel about that for one.

STU: I felt bad about that. Bret’s been with them … I was bought out by the WWF in the early 80s and I sent them the best talent I had here. Then I sent them Bret and Owen and the Bulldog and the Dynamite Kid. Even the Rougeau boys were working for me then. And several others that were in this territory. So there was a pretty good nucleus of believable workers coming from here.

OLIVER: Do you remember anything happening like that when you were a promoter? Like what McMahon did to take the belt away from Bret.

STU: Well, there’s been chicanery, slight-of-hand tricks going on in wrestling for years, I suppose. Since Shakespeare’s day. Since the gladiator days when fellows were wrestling lions and stuff. I even wrestled a tiger, so I’m right in there. I even wrestled a bear a couple of time.

OLIVER: Is it the type of thing where someone might get blacklisted?

STU: Usually they blacklist themselves by their conduct where they get a reputation of not being reliable. In sports, your reputation means a lot to you because they don’t trust you or figure you’re putting all out, you’ll fall by the wayside.

OLIVER: Who were some of the guys who were blacklisted when you were a promoter?

STU: There were several. I wouldn’t say blacklisted. There were people who were unreliable, couldn’t keep their appointments or trying to be too cute, they soon left on the side. Passed them by. Then if your reputation gets established as unreliable then nobody wants to invest in your talents even though you might be pretty talented. But if you’re unreliable, then they’ll try to get someone reliable who wasn’t so spectacular maybe.

OLIVER: Now that Bret is gone, do you expect to continue your relationship with the WWF — showing up at occasional pay-pay-views, TV shows?

STU: I don’t think I’ll be too active with them. I’d have to express myself if I was talking to Vince McMahon, whom I’ve known since he was a young fellow. I would have to express myself, my feelings anyway. I thought it was a rather a cheap way of getting the belt on Michaels. I don’t think it hurt Bret as much as it hurt the business. If they take a title that’s supposed to be worth something and then trick a guy out of it, I think that does injustice to the wrestling business.

OLIVER: Do you expect to go to some WCW shows then?

STU: I haven’t got any plans to go to the WWF or WCW shows. Right now I’m, I wouldn’t say phasing myself out of the business, I’m at the age where I don’t want to be traveling around a lot.

OLIVER: What about if they came to Calgary or Edmonton? Would you try to go to those shows?

STU: If they gave me an invitation and wanted me to come along I would, depending on the situation, I would try to comply. If my kids were on the show, or possibly a close friend, we’d go down and see them. I’ve been in the business for virtually all my life. I started in New York in 1946 and I wrestled all over the United States and Canada. I have many friends, both promoters and wrestlers.

OLIVER: Who were some of your best friends when you were wrestling?

STU: I knew Buddy Rogers. I knew Al Mills. I wrestled Lou Thesz. I wrestled all those fellers. There was Orville Brown. There was Danny McShane. I know Leroy McGuirk, the champion out of Tulsa.

OLIVER: Do you still keep in touch with any of them?

STU: The odd one once in a while. I visited the Funks a few months ago down in Amarillo.

OLIVER: Was that the Bret versus Terry Funk match?

STU: Yeah, that was the Bret versus Terry match. That was good match. Dory was one of the better wrestlers in the industry at one time. Terry was a little more bombastic than Dory. I never ever saw Dory ever in a bad match. You could give him a broomstick and he’d have a good match with it.

OLIVER: What kind of position are Davey Boy, Jim Neidhart and Owen in at the moment.

STU: There’s under contract to Vince for some few months, or a year or two maybe. I don’t know quite what the extent of the contracts are. It’s fairly hard to jump ship and Vince has been proving himself reasonably reliable with them. Once you establish yourself as not being a man of your word you lose some credibility too. I think Vince enhanced his position with that situation down in Montreal. I thought that was a disgrace. When you take the Canadian flag, and you have it black arted. You saw that?

STU: Didn’t you find that disgusting?

OLIVER: It was a bit much.

STU: I know if I did it I would be … they would take me out right now and put me away. And I couldn’t blame you if you did it. To think that this fellow [Shawn Michaels] did that on international television that went all over the country …

OLIVER: Did a horrible thing to our flag.

STU: Awful thing. He made out to even have an orgasm in the flag. He blew his nose in the flag and threw the flag on the ground. I was amazed that he got out of there without being lynched.

OLIVER: What are you most proud of that your son Bret has accomplished?

STU: Well Bret is one of the most popular wrestlers I know and he’s been popular even since he was in high school. He was a good athlete in football and high school sports. And a damned good amateur wrestler. And Owen was National Collegiate Amateur champion. So they could wrestle if they had to, and didn’t have to worry about some high school kid catching them and hitting them.

OLIVER: So you’d say that you’re proud of their amateur background?

STU: I’m proud of their amateur background and their professional background. In fact Owen can do anything that can be done in wrestling. He’s an exceptionally talented wrestler. I see him make those belly-to-belly suplexes. You had to be a damned good amateur wrestler to do that type of work. They wrestle snug enough that it looks quite believable. Bret may use that use slogan ‘The Best there was, the best there is’, but I think he’s justified in using it because he doesn’t do anything that embarrasses the sport.

OLIVER: What do you feel about some of the submission wrestling, like the UFC and Ken Shamrock?

STU: Ken Shamrock, I’ve worked out with him just a little bit when he was in Calgary here. I think he’s quite knowledgeable, like that belly-to-belly suplex. It’s funny. Submission wrestling is not that spectacular. I could demonstrate submission wrestling on you now, and I wouldn’t have to be turning somersaults in the air. I just keep my body close to yours and when I finished with your tail would be close to ass and you’d be saluting me when you went by. I would make a Christian of you when I finished with you. A couple of minutes with you, and I’d have you believing in what I was doing.