John Katan was four years old when his family emigrated to Canada and settled in Lethbridge, Alberta. When he turned 17, Katan started to work in the local coal mine. Katan’s incredible strength was evident even then; one day he managed to shovel 58,000 pounds of coal in an eight-hour shift. This was a western Canada record that earned him $28.13 and a turkey. In his spare time, Katan trained and wrestled with the mine’s sports club. Competing as an amateur for three years, Katan never lost once. He entered the ring on 150 occasions; he won the middleweight, light-heavyweight and heavyweight championships of Western Canada.

John Katan fought his first professional fight on July 1, 1928, at Milk River, Alberta. Twenty-one years later — and 5,985 pro bouts — he stepped out of the ring for the last time. During his career, he was regarded as a genuine performer, a wrestler who was out to win every match. His record attests to that reputation, since he won about 90% of his fights. 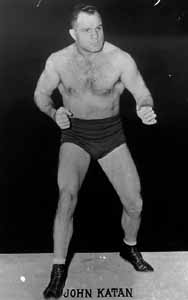 In 1940, in New Zealand, Katan won the British Empire heavyweight title by defeating reigning champion Earl McCready of Canada. Katan had previously challenged McCready for the title, drawing once and losing three times. During the next few years, Katan lost and regained the title three times before losing it for the final time to Whipper Bill Watson in 1945. On one occasion, he won the title by using his best hold: the standing, upside-down toehold. The hold immobilized McCready for seven minutes, and he fell to the floor unconscious.

For many years, Katan was considered Canada’s top heavyweight. He was a big attraction and travelled widely; particularly memorable were his three trips to Australia and New Zealand. During one of those trips, Canada declared war against Japan. Katan decided to return to Canada, and while on the liner, he trained officers in hand-to-hand combat. Once in Canada, he and some of his wrestling colleagues visited military bases and entertained the troops by staging bouts. He also found time to coach promising Olympic wrestlers and to train the Hamilton Police force in hand-to-hand combat.

In 1947, Katan bought out two wrestling franchises in Hamilton and began a successful career in promoting wrestling shows. For two years he ran the business while wrestling. The workload was more than he bargained for, and in 1949 he retired from competitive wrestling to concentrate fully on the business.

Katan stopped promoting wrestling in 1958 when he bought the Ava Golf Club in Brantford. He operated that club for many years.

This bio is ©1993 Kon Sokolyk. It is an excerpt from a book Their Sporting Legacy: The Participation of Canadians of Ukrainian Descent in Sport, 1891-1991, used with permission.