Behind the Gimmick Table: AEW and rival toyline history 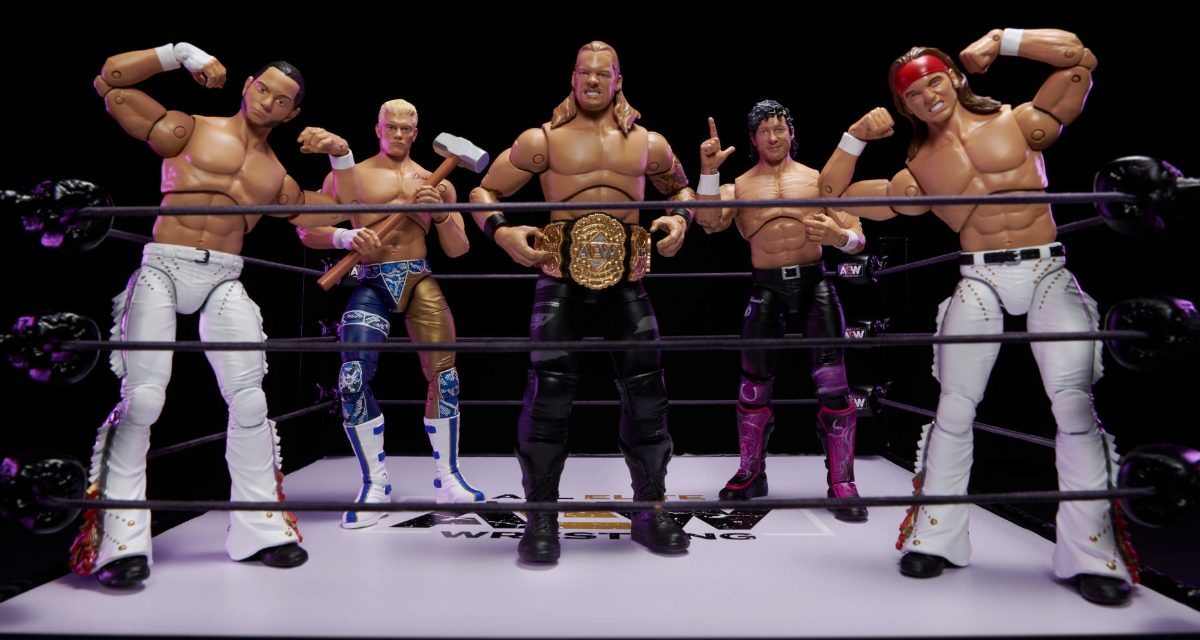 In professional wrestling, promotional rivalries have always been around. The legendary cable TV “Monday Night Wars” of WWE versus WCW in particular has been well documented, in many mediums.

Today, there is a growing war between the reigning champion WWE and newcomer AEW, a battle that doesn’t just take place on television. There’s battles on streaming platforms, on social media, and as of now, on toy shelves. 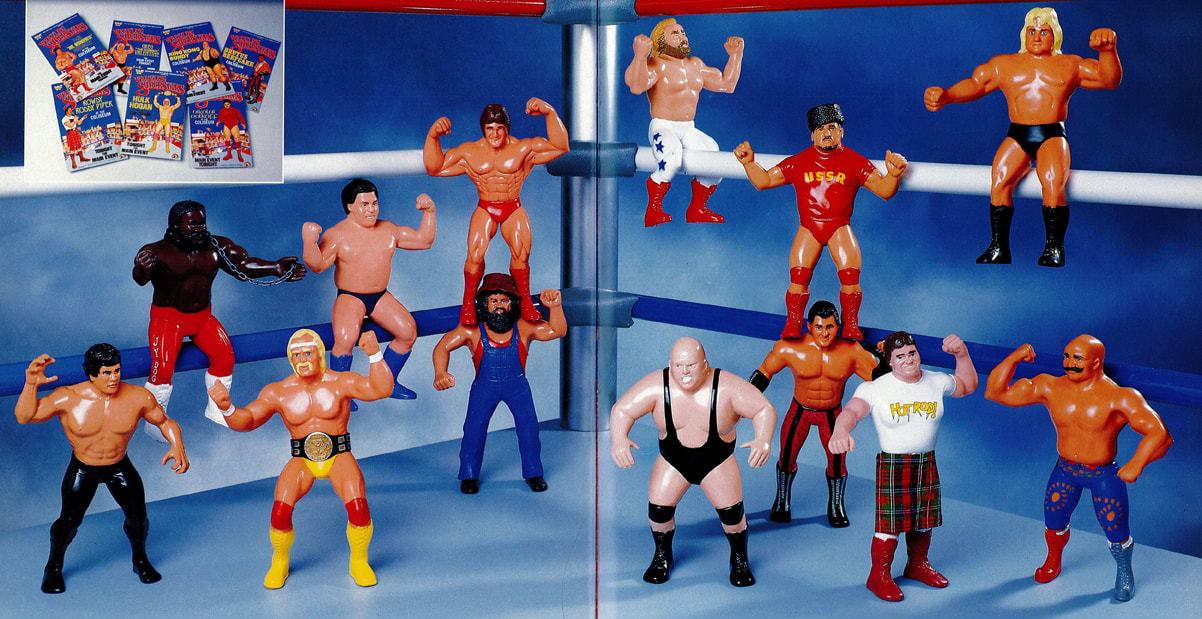 Traditionally action figures have been a merchandise cornerstone for major wrestling companies dating back to the initial offering from WWF/E during its breakout “Rock N Wrestling” era of the 1980s of 8” WWF Superstars created by LJN.

The WWF figures were to have originally been produced by Remco. But when things changed, Remco ended up releasing figures for WWF rival, AWA, in 5.5-6” scale, including the first ever wrestling ring accessory. 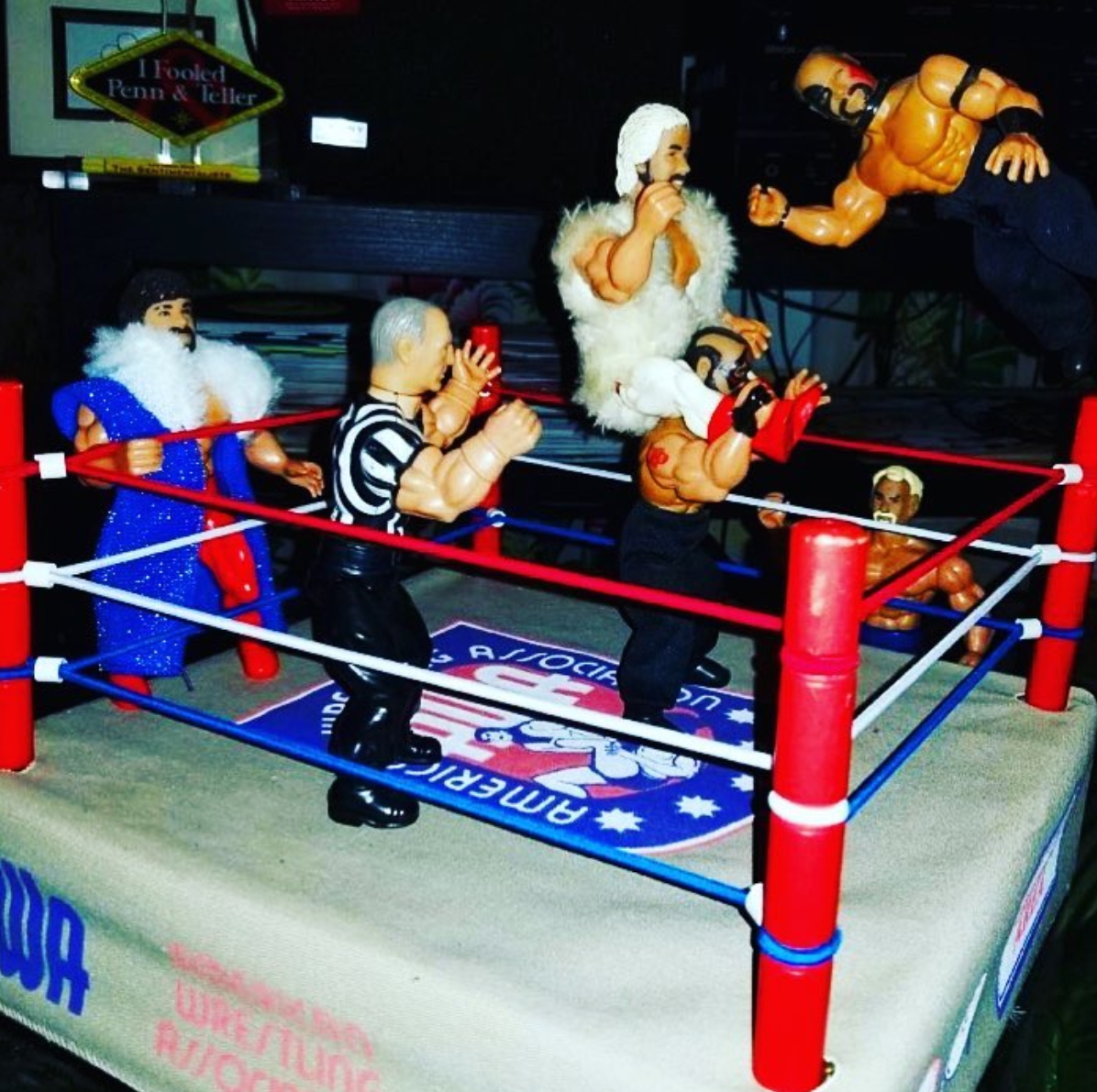 These initial lines of wrestling figures set a precedent that continues today.

Although wrestling figures have remained a constant, with product lines from competing companies being available simultaneously on store shelves, there were various scales (sizes in non-collectible speak) and have differing stylistic approaches.

Hasbro took on the WWF license in 1989 after LJN, and opted to scale all the way down to a chunky and cartoony 4” scale. WCW competed in a similar scale but with more realistic — almost mini-LJNs — by Galoob in 1990.

LJN-rooted Jakks would go on to produce WWF/E figures in various scales for about 15 years. WCW had OSFTM which included both WWF LJN and Hasbro style knockoffs.

Jakks would go on to create figures for TNA/Impact and OSFTM for ECW.

When Figures Inc. entered in the 1990s with concurrent figures in a similar scale to Jakks WWF Bone Crunching action figures, the look of the figures was quite different from Jakks. Figures Inc. is still creating figures based on independent wrestlers under the Legends of Wrestling line to this day. Today its figures are in the style of Jakks’ later Ruthless Aggression/Classic Superstars figures.

A selection of short lived lines of wrestling figures from WWF/E WCW and TNA respectively.

There would be slight exceptions to the rule of incompatibility between concurrent lines, but the similarities were surface level or side release blips separate from the main lines.

Today Mattel too has its bread and butter lines of realistic looking WWE Basic and Elite Figures in the 6” scale, as well as side offerings. It has produced 12” True Moves, 4” Hasbro-like Retros and currently a 5.5” Masters of the Universe crossover line.

The 5.5” scale brings us back to where the competition all started, AWA Remco figures. It was the scale that Mattel once upon a time took Remco to court over, the result of which would shape action figure history.

The original 5.5” Masters of the Universe line was released in 1981 by Mattel. The toys and the cartoon it was based upon were international hits. Remco had many licenses under its belt. Their Monsters line was to scale with the common 3.75” scale popularized by Kenner’s Star Wars and MEGO’s Pocket Super Heroes among many others.

Remco released Conan and Lost World of the Warlord knock offs in the same scale as Masters of the Universe and advertised it explicitly on their packaging. This prompted Mattel’s suit. Mattel also alleged that under New York State Law, it had the right to be protected against unfair competition. 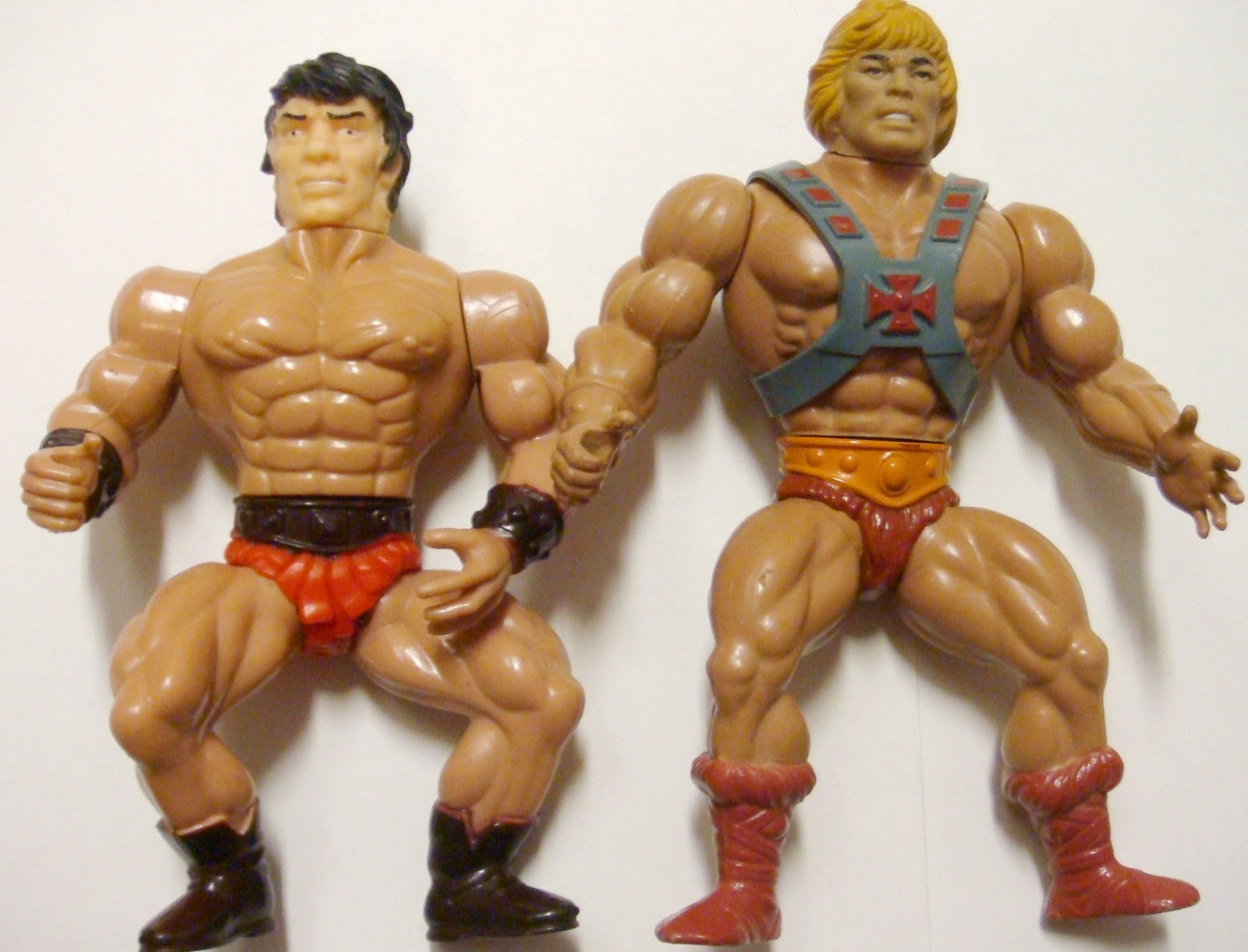 A comparison between a knockoff and Mattel Heman figure (Courtesy of galaxywarriorsbysungold.blogspot.com)

The premise of the infringement was that Remco copied the 5.5” exaggerated bodybuilder physique with shortened legs. Mattel claimed Remco copied the Masters of the Universe, torso which Mattel considered to be the essential part of the doll. The court decided that “a superhuman muscle man in what since the Neanderthal times has been a traditional fighting pose… is not in itself protectable.” For the second part of the case Mattel had failed to provide sufficient evidence that Remcos toys could be confused with Masters of the Universe by consumers and retailers.

The Remco Masters of the Universe knockoffs survived and thrived. Ironically Remco’s 5.5” Warrior Beasts would inspire a black hole of knockoffs even more deep than that of Masters of the Universe, starting with Sungold’s Galaxy Warriors. These knockoffs and bootlegs ventured into the realm of wrestling and beyond, reusing the same infamous torso and heads over multiple lines as is the case with the infamous cult figure Baltard. 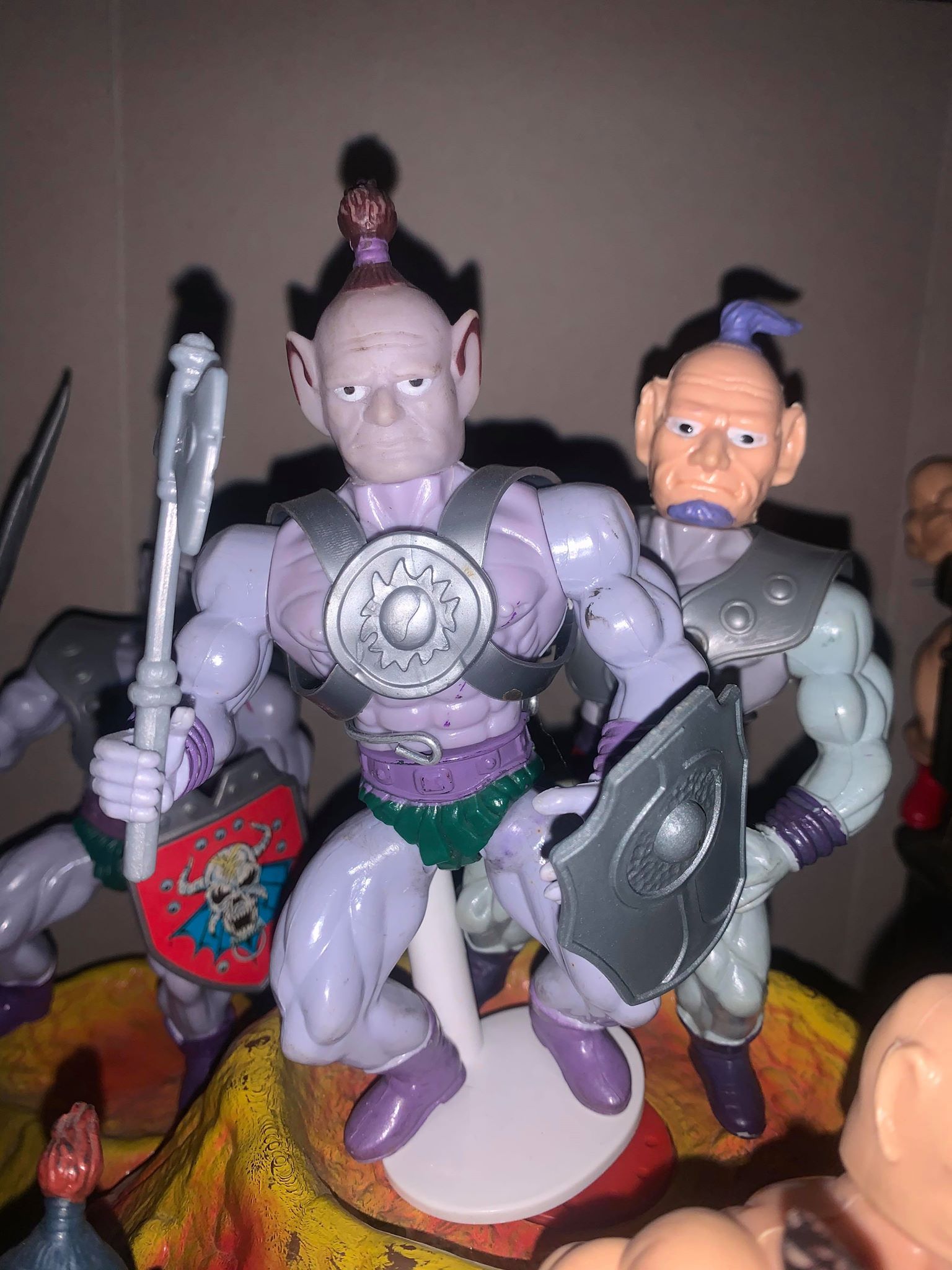 This brief history lesson brings us to the current day, as the Pro Wrestling Infinity War rages on between WWE and AEW.

The first series of AEW figures by Jazwares will be in big box stores all over the world and are nearly indistinguishable from Mattel’s Elite WWE figures (pictured at the top of the page). You might have seen the AEW figures heavily promoted on its TV show, Dynamite. Jazwares also has licenses for action figures the video games Fortnite and Roblox, and the long-running cultural phenomena of Pokemon.

As of yet, no knockoff Baltard figure is scheduled for release.

NEWS AND NOTES from Dr. Colossus