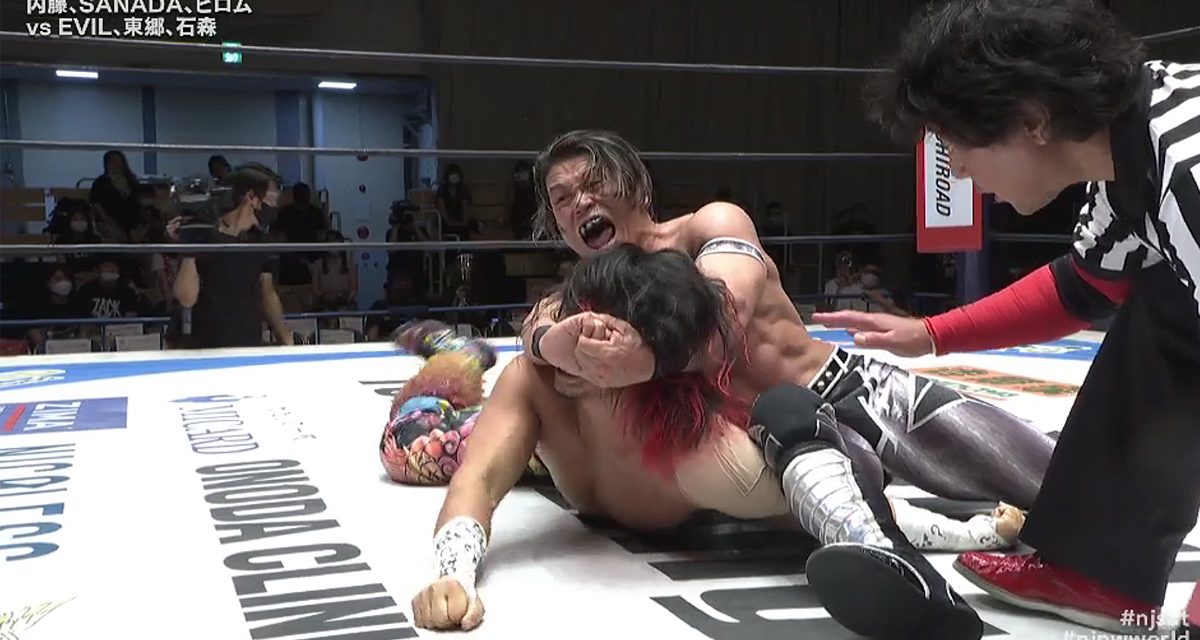 With Naito ready to take on Evil for the IWGP Heavyweight and Intercontinental Championships in the near future, the focus of night two of Summer Struggle was boosting the bad blood between IWGP Junior Heavyweight Champion Hiromu Takahashi and Bullet Club’s Bone Soldier, Taiji Ishimori.

Just seconds after the bell rang in the main event of Bullet Club versus Los Ingobernables de Japon, Ishimori threw Hiromu to the canvass injuring his shoulder and arm. Hiromu crawled to the corner where a concerned Naito and Sanada checked on him and the heavily taped shoulder. A trainer came out to offer assistance. Ishimori clobbered Sanada from behind. Hiromu rolled off the apron to the floor. 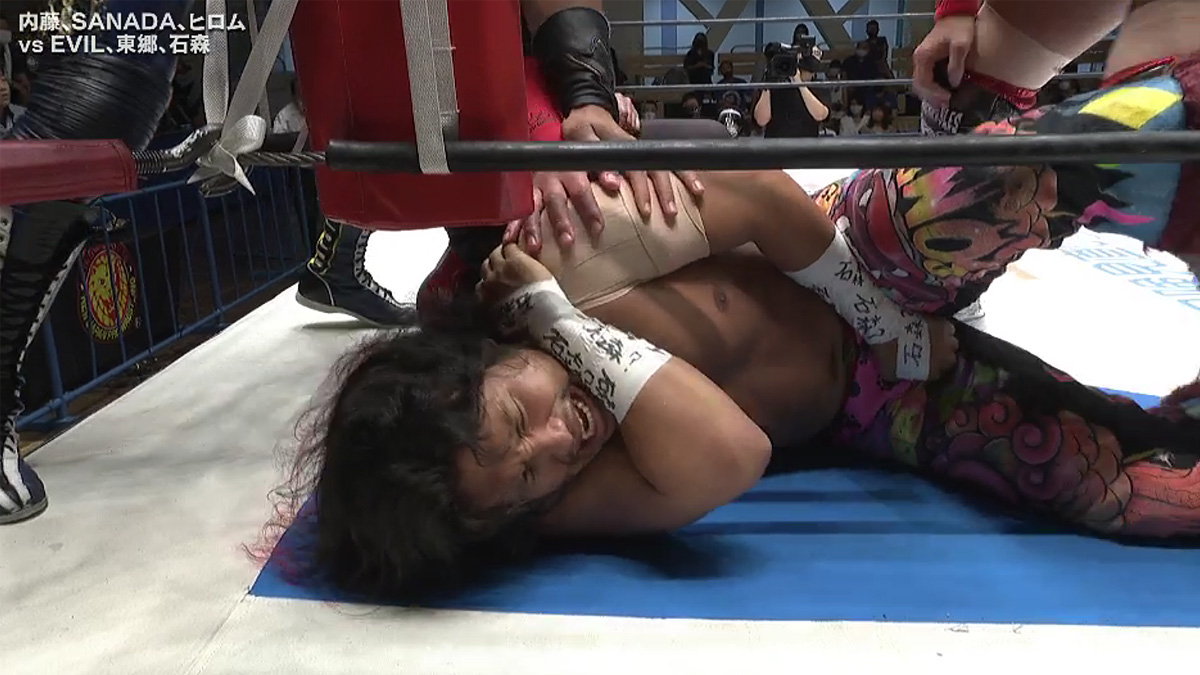 An injured Hiromu seeks the safety of a friendly corner. Courtesy: NJPW.

Ishimori accidentally drop kicked Dick Togo when Sanada shoved him out of the way. Sanada splashed both members of Bullet Club on the floor. Evil and Ishimori snuck outside the ring mugging a distracted Naito and Hiromu while the action between Sanada and Togo went on in the ring.

With the crowd cheering him on, Hiromu made it back to the apron and the match. Naito, who had been triple-teamed, tagged him in. Ishimori shoved Hiromu shoulder-first into the turnbuckle, gave him a running kick to the shoulder, a back cracker and made him submit to the Yes Lock. Naito and Sanada helped Hiromu to the back as Ishimori scoffed at him from the ring. 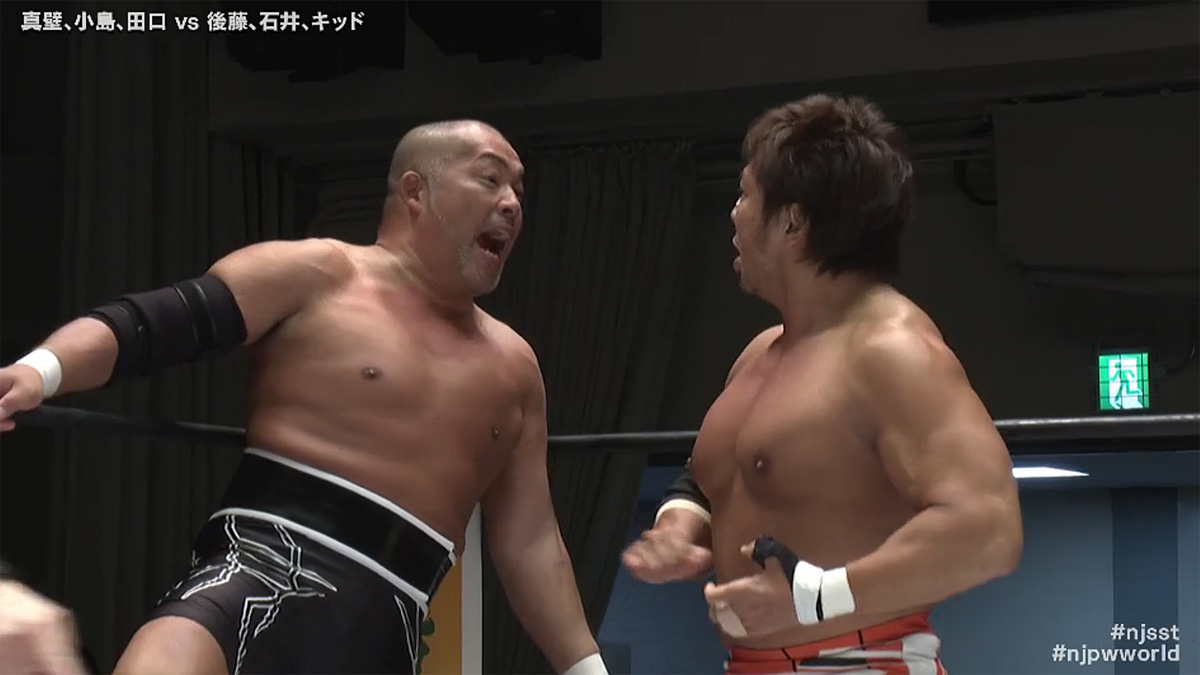 Kidd challenges Makabe again to begin things. Makabe quickly takes over. Taguchi asks to face Ishii. After several tries Taguchi hits the Funky Weapon on Ishii. Kojima and Ishii exchange machine gun chops in a corner. Ishii challenges Kojima to hit him with everything he’s got. Kidd kicks out of Taguchi’s running knee strike but is pinned by Dudon.

Yano immediately goes for a turnbuckle. Shingo puts a stop to that. Yano tags out and leaves the ring. Yoshi-Hashi is confused by it all. Yoshi cannot match power with Shingo who absorbs whatever Yoshi can throw at him. Yano fights being rolled up by Bushi. He ducks Shingo’s Pumping Bomber. The official stops Yano from punching Bushi in the “lower abdomen”. Yano rolls up Bushi but Bushi rolls through pinning Yano. 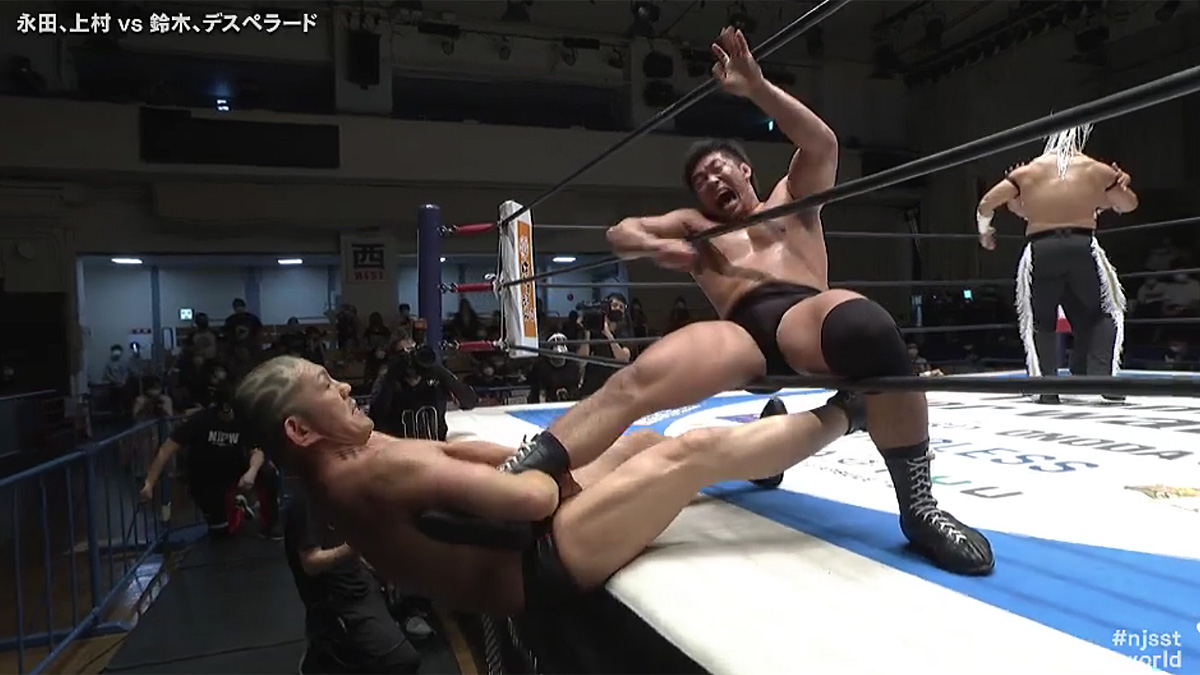 Suzuki and Nagata push their feud even further. These two men just don’t like each other. They start right where they left off with a forearm slugfest in the centre of the ring. Suzuki shoves Uemura out of the ring. Desperado works him over on the floor. Desperado chokes out Uemura with a knee to the throat. Suzuki does the same with a microphone cable to Nagata. Suzuki shoves the official to the ground when he instructs him to get back into the ring. Suzuki tries to snap off Uemura’s legs as he is wrapped up in the ropes. Uemura is pinned by Desperado’s Pinche Loco. Nagata and Suzuki get into another forearm showdown on the floor. Uemura is given a big round of applause for his efforts. 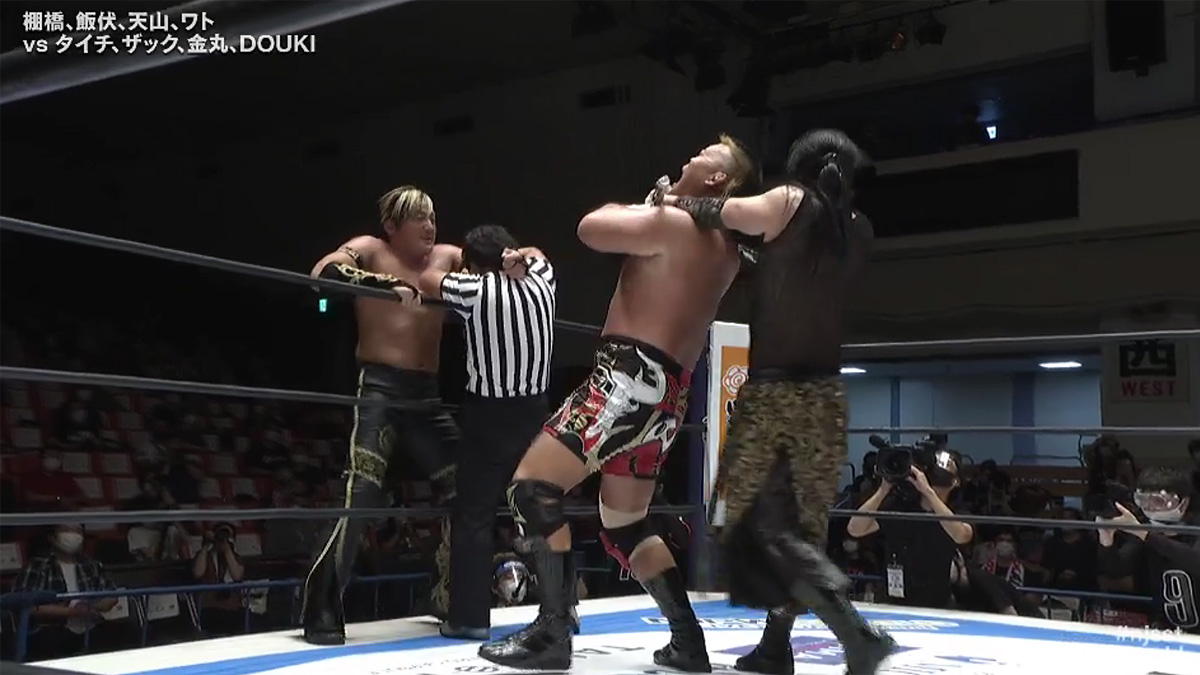 As Taichi distracts the official, Douki chokes Tenzan with his sceptre-thingy until the official takes it away. Douki tries the same thing with Ibushi. A Kamigoye puts Douki away. More trash talking between the former champs Kota Ibushi and Hiroshi Tanahashi and the current  IWGP Tag Team Champions Zack Sabre Jr. and Taichi.

Takahashi refuses to back down from Okada as per their rivalry. Gedo attacks Sho from behind throwing him into the ringside barrier. Gedo goes for his brass knuckles. Red Shoes moves to stop him. Jado slips into the ring whacking Sho right in the head with his kendo stick. Yujiro pins Sho with the Pimp Juice DDT. Yujiro busts Okada in the head with his pimp stick leaving him lying on the floor.