NXT: Lee bests Gargano and Balor for a shot at Adam Cole 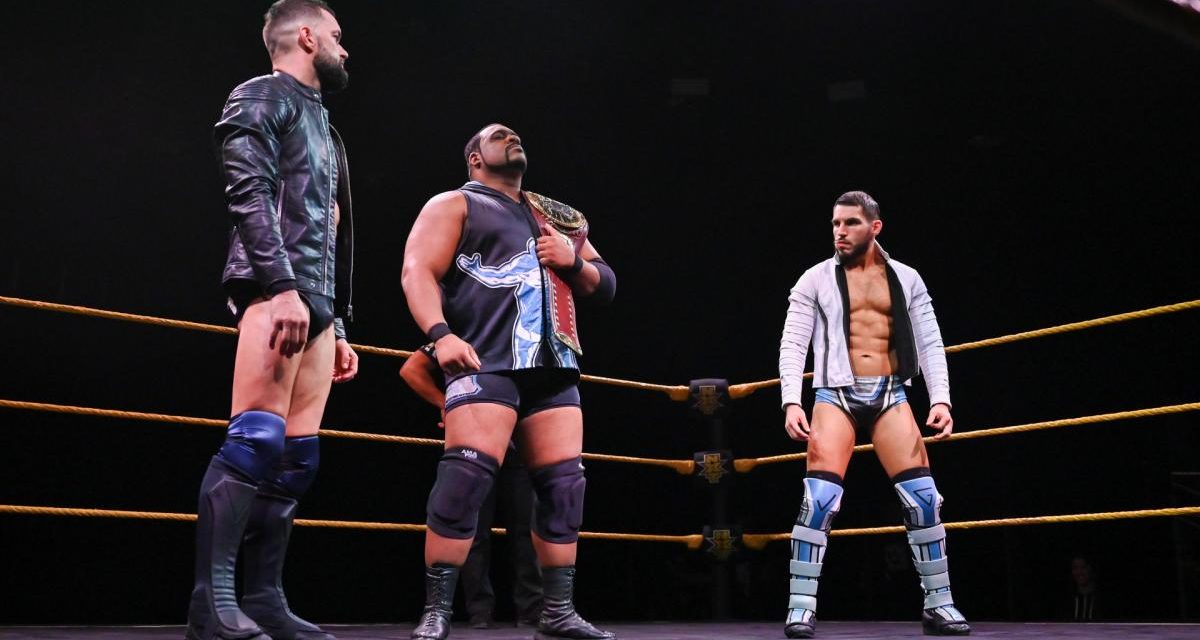 We are on tape from Full Sail Live in Orlando, Fla. Mauro Ranallo and Beth Phoenix have the call for this week.

Video from earlier shows Cameron Grimes telling the camera crew to check on Damian Priest, saying he looks a little crushed. Priest is slouched against his car outside of Full Sail, telling officials he has hurt his back.

Cameron Grimes kicks off the show and makes his way to the ring. Grimes says Damian Priest is going to no-show the biggest match of his career. Grimes says Priest acted like his tires were slashed last week and now he is pretending someone beat him up in the parking lot. Grimes says it doesn’t matter to him because it is just another victory.

Priest storms in from the side of the stage as officials try to hold him back. Priest gets in the ring and Grimes starts kicking him down. The referee gets a break and asks Priest if he wants to start the match and rings the bell.

Grimes charges into forearms from Priest. Grimes kicks the taped ribs of Priest, but Priest with another forearm to work Grimes down in the corner. Grimes hits the ribs on a back body drop attempt. Priest kicks back and elbows out of a German suplex from Grimes. Grimes with a forearm to the taped lower back and tries a Superman Punch. Priest blocks for a sit-out chokeslam. Grimes rolls outside and plays like he is giving up on the match, only to tackle Priest into the apron. Priest tries a Razor’s Edge, but his back gives out. Grimes hits Cave-In on the floor, but Priest beats the count. Priest tries to tackle Grimes in the corner and injures his body again for another Grimes Cave-In.

A quick match that was full speed from the start. Grimes continuing to cheat to win has been a great run throughout NXT’s shows the last few weeks and he gives a lot of bang for the buck whenever he’s in the ring for any amount of time.

Rhea Ripley interviewed entering Full Sail earlier today and Robert Stone interrupts to say Ripley hurt his body throwing him into the trash two weeks ago, but she also hurt his heart. Stone knows Ripley was showing tough love and he tells her that Aliyah has signed to the Robert Stone Brand. Stone doesn’t give second chances, but he has a golden ticket for Ripley to give her a second chance. Ripley punches him in the stomach and throws him in the dumpster.

Aliyah comes up and says Ripley didn’t have the right to throw her manager in the trash and slaps Ripley. Ripley says Aliyah has a golden ticket to get in the ring with her tonight as we go to a show preview and commercials.

They exchange and Atlas with a running crossbody and chops. Snapmare into a chinlock for Atlas. Escobar up, but Atlas with a springboard arm drag. Atlas stomps Escobar down. Escobar fights up again. Atlas sent to the apron and he takes a kick at Raul Mendoza and Joaquin Wilde. It allows Escobar to knock him into the Plexiglas barricade as we break.

Escobar works Atlas down as we return. Single-leg dropkick gets a nearfall and the NXT Cruiserweight Champion continues to keep Atlas on the mat. Atlas falls out of the Phantom Driver and lands body shots. Slam and standing moonsault get a nearfall for Atlas on his comeback. Escobar sent out with a dropkick. Moonsault takes out Wilde and Mendoza ringside.  Escobar ducks under a springboard from Atlas, but Atlas with a headlock driver for a nearfall. Atlas stopped up top and Escobar gets the Phantom Driver.

Winner by pinfall: Santos Escobar, 2.75 out of 5 stars

There were some points were it looked like these two weren’t clicking on all cylinders if things moved too fast, but it was still a solid match with Escobar capitalizing on Atlas being too focused on all of El Legado del Fantasma.

Roderick Strong in his Undisputed Era therapy session talking about the trunk and Kyle O’Reilly reveals himself as the therapist. They all hype Strong up and he conquers getting in the trunk before he faces Dexter Lumis tonight.

Gonzalez and Carter start. Carter fires up and gets knocked down. Carter with chops and an attempted springboard arm drag. Catanzaro sneaks a tag and chop blocks the leg. Catanzaro unable to do anything with her attempts at high-flying offense as Gonzalez rag dolls her. Double drop toehold takes out Gonzalez on the second rope, but Gonzalez tackles Carter into the corner. Kai tags in and Catanzaro with a pop-up senton for a nearfall, but Kai with a big boot. Kai works Catanzaro down. Carter gets the hot tag and works the comeback. Wheelbarrow roll into a superkick gets a nearfall on Kai. Carter with a big boot for another. Catanzaro comes in with a hurricanrana. Kai tags out and Gonzalez in with a one-arm powerbomb. Kai in with a Koji Clutch.

Winners by pinfall: Dakota Kai & Raquel Gonzalez, 2.5 out of 5 stars

Gonzalez was given some impressive power spots here, while Carter and Catanzaro look like a great high-flying team that could be an interesting duo for the women’s tag division.

Bronson Reed shown preparing for his match with Karrion Kross as we break.

NXT North American Champion Keith Lee prepares for the main event as we return from commercials.

Reed takes Kross off his feet, but runs into a punch in the corner. Kross with a big boot and a punch that knocks Reed out. Exploder suplex lands. Reed with forearms and an enzuigiri out of the corner. German suplex on Kross, but Kross pops back up. They exchange forearms and Reed knocks him in the corner for a splash. Kross smiles at Reed in the corner and Kross lands a Northern Lights suplex on Reed. Lariat, Doomsday Saito, and the Kross Jacket in.

Another quick, back-and-forth match that did well to get Kross a win against a fellow big man. Both got moments to impress and Kross came out looking even more of a monster for it. It did exactly what it needed to.

NXT Champion Adam Cole with McKenzie Mitchell and she asks who he’d like to see win the main event tonight. Cole says the common man would say whoever is weakest, but he is not the common man. Cole says whoever, because it doesn’t matter and the result will be the exact same. Cole says he is only concerned his mantle has room for another title and says that was a stupid question.

Aliyah tries a kick and Ripley with a gutwrench throw to counter. Ripley tosses Aliyah around and to the outside. Aliyah snaps Ripley on the top rope and grabs the hair of Ripley for a knee. Ripley drops Aliyah for a nearfall. Ripley locks in a Trailer Hitch on Aliyah and Stone throws his shoe at Ripley. Ripley chases him around ringside and back into the ring. Stone escapes. Aliyah tries to roll Ripley up, but Riptide lands.

Squash with a little ringside distraction thrown in. As good as Stone is on the microphone, not really sure what the end game of this is. Then again, if there ever was a time for filler…

Johnny Gargano prepares for the main event and Roderick Strong vs. Dexter Lumis is next as we break.

Strong rolls out after the bell rings and Fish has to talk him up. Strong keeps running away and Lumis walks him down. Strong tries to escape and he dives right into the Plexisglas. Strong runs backstage.

Strong being able to make this work is a testament to being one of the most consistent things about NXT over the last few years.

Post-match, Lumis tries to lock in the arm triangle on Fish, but Fish escapes.

Robert Stone and Aliyah on video chat with NXT General Manager William Regal and Stone says they need a rematch with Rhea Ripley. Regal catches him and says Stone and Aliyah will face Ripley. Stone complains, but accepts on the condition that Ripley has to join the Robert Stone Brand if they win. Regal says he can’t do that, but Ripley walks up and says she is good with all that. Ripley says she will see them next week.

Finn Balor prepares for the main event as we break.

Gargano rolls outside as the bell rings. Lee catches Balor and Gargano tries to roll Lee up. Lee takes both out with a shoulder tackle as we break.

Gargano and Balor try to take Lee down as we return. Lee with Grizzly Magnum on Gargano. Balor grabs a sleeper. Lee struggles, but rips him off. Gargano gets the sleeper immediately after. Lee rips him off as well, but Balor returns. Balor with a series of running forearms on Lee and he follows with body shots. Lee catches him running in and a double overhead throw on Balor and Gargano lands. Balor gets a sleeper hold in and Gargano goes for a kneebar on the right leg of Lee. Lee throws Balor off and picks Gargano up for a left hand. Lee walks Gargano down outside and Balor with a Sling Blade on the floor. Gargano with a senton off the steps. Lee sent into the steps by Gargano and Balor as we break.

Balor chops Gargano into the corner as we return. Gargano kicks out of the corner and lands a slingshot spear for a nearfall. Gargano with chops to put Balor down. Balor knocks Gargano down as he tries a slingshot. Flip dive over the top for Balor wipes Lee out. GargaNo Escape blocked into a Final Cut for Balor that gets a nearfall. Sling Blade for Balor lands, but Lee pops up on the apron. All three exchange in the corner and Lee wipes them out with a slingshot crossbody. Lee works the comeback. Balor with a double-leg takedown for a double stomp. Lee lifts Balor, but Balor to the sleeper. Gargano superkicks them both. Slingshot DDT gets a nearfall on Balor. Gargano with a guillotine on Lee, but Lee able to roll out. Gargano with a suicide dive on Lee outside, but Balor catches him on the other side. Lee lands a Pounce to put all three down outside.

Lee takes Balor up inside. Powerbomb turned into a double stomp for Balor. Balor dropkick runs into a Gargano superkick. Gargano dropkicked into Lee. Lee falls on top of Gargano. Balor goes for Coup de Grace. Lee meets him with a chokeslam attempt. Gargano rolls Lee up with his feet on the ropes and a handful of tights. Big Bang Catastrophe on Gargano lands. Lee covers, but evades a Coup de Grace from Balor that lands on Gargano. Big Bang Catastrophe on Balor follows.

A really good main event that was structured well to allow Lee the big moments in the comeback for the victory, all while still looking strong individually throughout. Not much more you could expect out of a setup match for a world title shot.

The show closes with Lee and Cole staring down with their belts.

A great main event and some short matches with a lot of intensity really kept things moving for a very good show that sets up a lot in the coming weeks.