AEW Dynamite: Chris Jericho is fed up with Orange Cassidy ahead of Fyter Fest 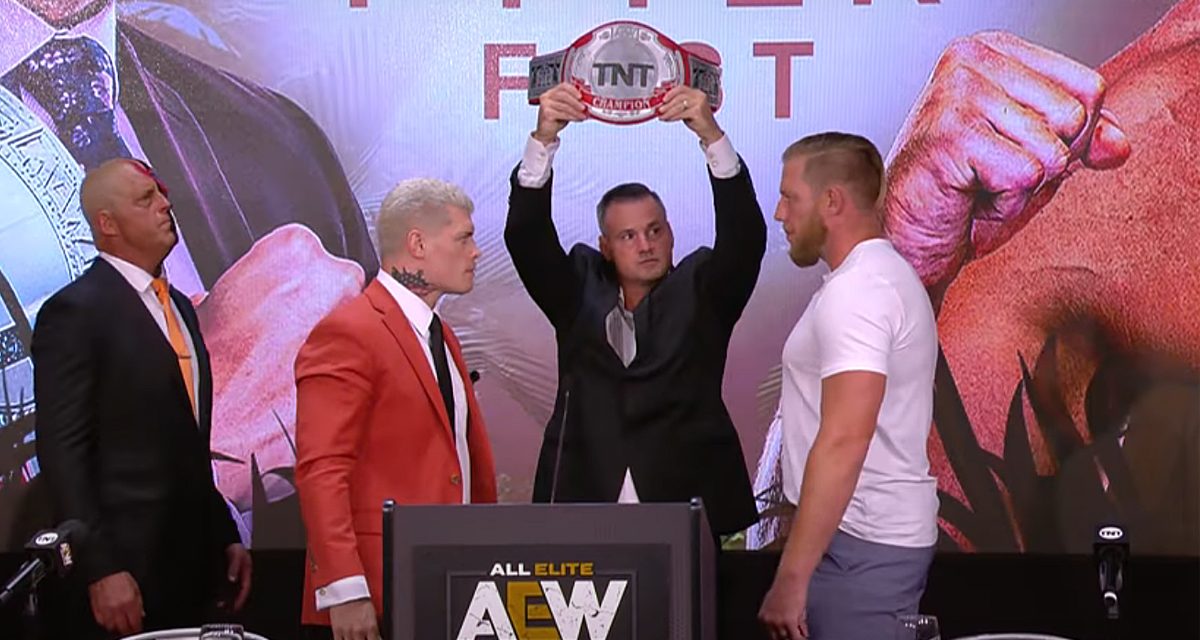 Since so many of us count on wrestling for escapism, it stinks when real life intrudes on it. That’s especially true for this episode of AEW Dynamite, as AEW revealed earlier in the day that QT Marshall had to be pulled from the card because he had been in close contact with someone diagnosed with COVID-19. AEW Champion Jon Moxley was later sent home due to similar concerns, driving home how serious the pandemic continues to be. Despite that, Dynamite will try to help us forget our cares for a few hours from Daily’s Place in Jacksonville, with the final broadcast ahead of Fyter Fest.

Not entirely certain how I feel about a Lumberjack Match in this current climate, but the people on the outside are pretty close together even serving as the audience, so it is what it is. Best Friends certainly look the part, sporting big flannel shirts. Wardlow simply looks like money and hasn’t been bad in the ring so far in his AEW career, he just needs more matches. The two big men battle up onto the stage where there are no lumberjacks, though Brandon Cutler and Mark Stunt both head up there and are thrown down into the pile of humanity. Luchasaurus hurls himself down there with a shooting star press, an impressive sight from a man his size. MJF provides just enough of a distraction to help his muscle get the pinfall, though he pays for it after a spear from Jungle Boy. A huge brawl breaks out after the final bell, and now the lumberjacks are really earning their dough.

Taz is going to explain exactly why Brian Cage hurts people so much with his offensive moves. I actually like this kind of thing, plus it’s the first time Taz has said something without yelling in weeks.

Dr. Britt Baker is passing notes to Tony Schiavone again, and she’s now encased in a plexiglass shield with a personal security guard. As one does.

Red velvet cake is delicious, but this Red Velvet gets no love as she is quickly squashed by the women’s champ. Shida makes a beeline for her upcoming challenger, Penelope Ford, in the crowd, going through poor Kip Sabian in the process. That’s one

Earlier today, there was a press conference for Cody and Jake Hager … except Jake is nowhere to be found. Maybe we can send the Slam Wrestling helicopter to look for him. Anyway, we hear from Arn Anderson and Cody — who reveals the TNT Championship belt is unfinished due to the pandemic, which is kind of intriguing — before Hager finally arrives for a boxing-esque faceoff. Hager’s wife throws water in Cody’s face and they peace out.

It’s time for the next chapter in the saga of Joey Janela. When he and Sonny Kiss stop at a convenience store, the Bad Boy ends up using groceries to fight off some men harassing Sonny (who also beats up some of them). And thus a tag team is born, or something.

Match 3 – Colt Cabana and “The Exalted One” Mr. Brodie Lee vs. Joey Janela and Sonny Kiss

Will he or won’t he? This is something of a tryout for Colt, an attempt to make him become the highest profile recruit to date for the Dark Order. Joey and Sonny feel like they have the potential to be a fun duo, particularly when they do consecutive moonsaults to the floor. The match breaks down a bit later before Lee lets Cabana get the pin. Colt is excited to pick up a win, but that doesn’t necessarily mean signing on the dotted line. At least he doesn’t get beaten down by Lance Archer like Janela and Kiss.

It appears Shawn Spears’ new gimmick is going to be using a loaded glove to win matches, which … well, it’s a gimmick, anyway.

FTR was originally supposed to take on the Natural Nightmares, but with Marshall sent home, SCU makes for a more than acceptable replacement. You could even say this match now has a higher ceiling and I wouldn’t argue with you. Frankie Kazarian would be up for Most Underrated Wrestler on the AEW roster if that was a thing, and reminds us all of that again. But FTR isn’t losing this, and they don’t. My son is already wondering when they get their title shot.

Dax Harwood and Cash Wheeler call out a bunch of AEW tag teams after their victory, but they have a special message for the Young Bucks: You’ve bitten off a little more than you can chew. Alas, someone else has beef with FTR too, and it appears Butcher and Blade are holding their pickup truck hostage to get them to agree to an eight-man tag match at Fyter Fest. FTR and the Bucks will have to team up to take on Butcher and Blade and the returning Lucha Bros., who get in a move or two and escape in FTR’s truck.

The AEW announcers set up the stark contrast between the tag team champs and Best Friends. Kenny Omega and Hangman Adam Page definitely aren’t best friends, for starters, but they are great champions. Both teams are feeling confident heading into Fyter Fest.

With Moxley absent, we get a video package promoting his upcoming collision with Brian Cage. Let’s be real, though: We likely would have seen this anyway. Only Mox would admire someone a little more for throwing him through a car window. Now let’s check out a squash match!

J.R. notes that Cruz’s family could be watching so they should mention his name. He gets pinned by the Drill Claw, and if Moxley would have been here, it would have been the Paradigm Shift, so it’s kind of like pick your poison. Taz naturally mocks Moxley (sorry) afterward, claiming he’s afraid of Cage.

Lee tells Cabana that winning feels good, and that it’ll feel even better when they defeat SCU together at Fyter Fest. OK then.

The announce team runs down the full Fyter Fest card, night by night, and it’s looking pretty stacked. Baker sends another note to Schiavone to read, dissing Big Swole. The good doctor is confident when Swole arrives, but maybe she should have built a roof on it too. Swole dumps garbage on Britt, whose assistant can only ineffectively try using a leafblower to try aiding her. That ain’t it, chief.

This is “Broken” Matt in action tonight, accompanied by Neo 1, in case you’re keeping score at home. Ortiz assists frequently from the floor, making one wonder if Private Party might come to Matt’s aid. Or maybe he won’t need it. AEW continues to give wrestlers who primarily compete in tag teams chances to shine on their own, which is also the case here even though Hardy prevails in the end.

Ortiz immediately assaults Hardy with the madball, and sure enough, Private Party does eventually make it out there to help Matt. Locker rooms are a long way away, you see.

Instead of a main event, we’re getting a faceoff between Chris Jericho, who has a slightly revised ring entrance (still with “Judas,” though, no worries) and Orange Cassidy. Le Champion really can’t understand why people love Freshly Squeezed, though he does give him props for getting over by being himself. But Jericho also thinks fans like Cassidy because he is like them: lazy, a slacker. Is Orange going to respond? “Talking takes effort, Tony,” says Excalibur. He does not speak, but he does his slacker kicks despite Jericho saying he’d kick Orange’s teeth down his throat for trying that. Le Champion finally crosses the line messing with Cassidy’s sunglasses, and that lights a fire under Orange, sparking a brawl that spills well outside the ring. They scrap up the stairs, right by some not very socially distanced onlookers, to a concourse level where Jericho smashes his foe with the arm of one of the remote cameras. That bloodies him, but not enough to prevent him from smashing Jericho with a forearm shot that makes him fly back through a small table. Partial thumbs up for that, and we’ll see you in seven for night one of Fyter Fest!

Not bad, but the squash matches made it feel a little too much like this show as treading water before Fyter Fest, which it kind of was. Also no main event, but Orange Cassidy cancels that out a bit. Bring on the non-PPV PPV.