NJPW returns with Together Project Special 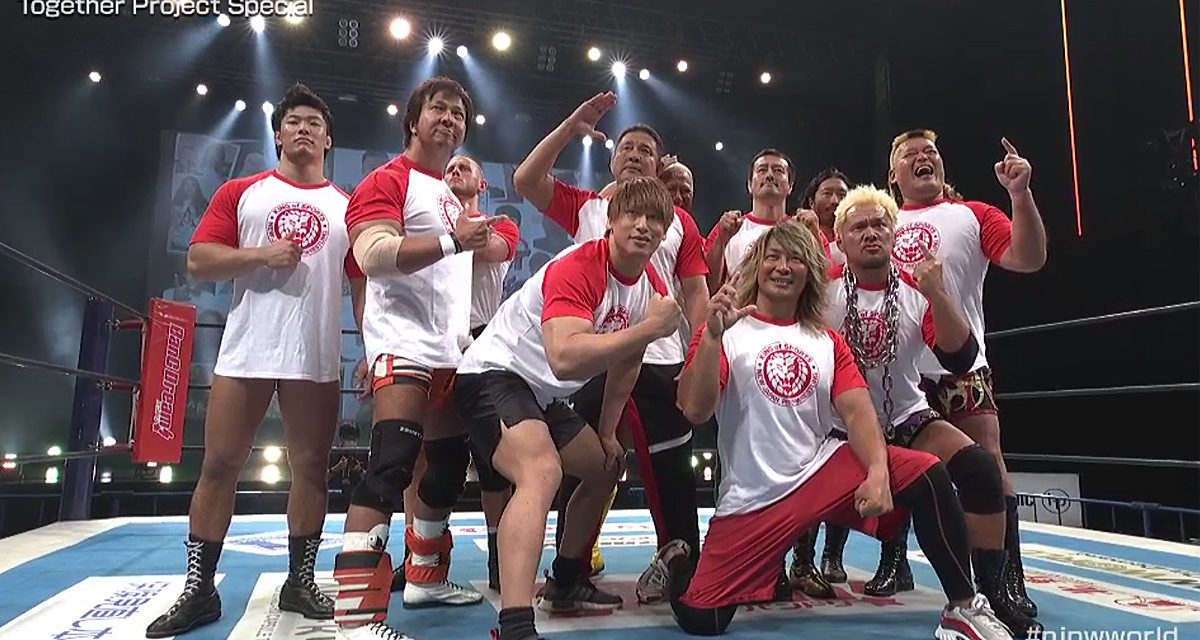 After 110 days of being on haitus the promotion has returned with today’s Together Project Special a preview of the New Japan Cup (called the NJPW World Special New Japan Cup 2020 this year) starting tomorrow.

The show served to highlight some of the round one matches in the Cup  with many of the soon-to-be rivals taking pre-emptive shots at one another to gain any kind of slight advantage.

The show began with part of the roster coming to the ring in NJPW shirts led by Hiroshi Tanahashi. In a statement filled with emotion, he thanked and welcomed fans back to NJPW even though they were not in attendance for the show. 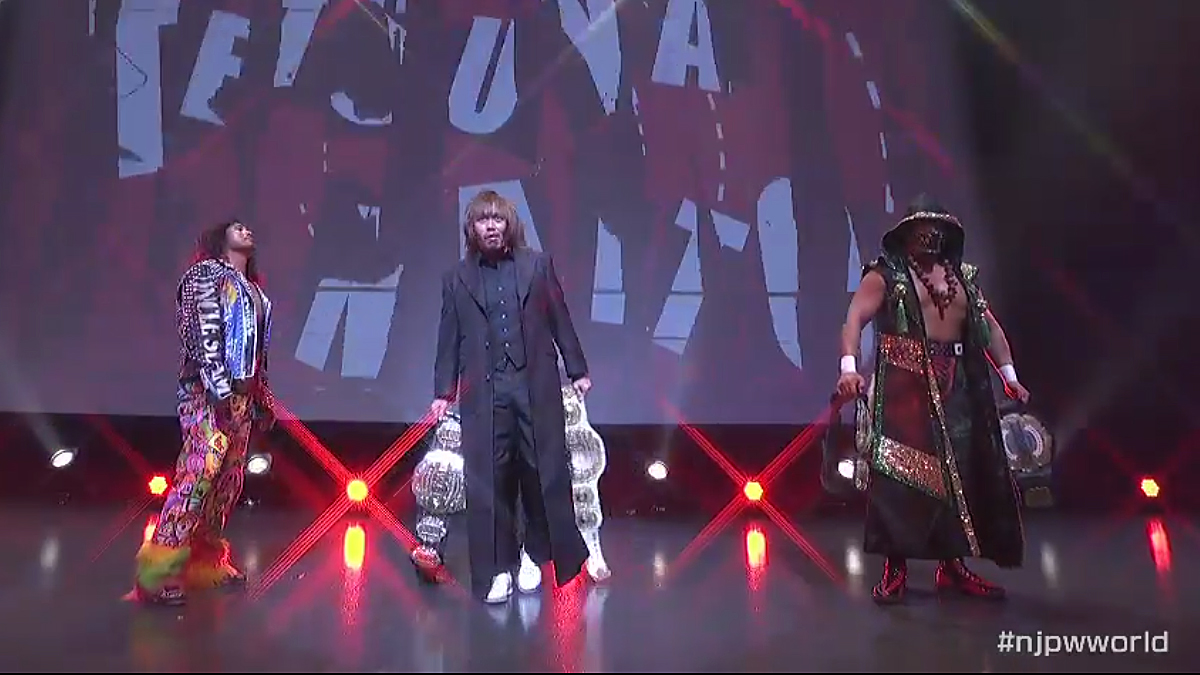 The Chaos leader elected to begin the match against Naito. Okada teased striking Naito but broke clean. Naito booted Okada in the stomach lowering the boom on him taking him down to the mat with a headlock which Okada reversed into a headlock of his own.

Smiling the entire time, it seemed like both Okada and Naito were glad to be back in the ring doing what they do best.

The two powerhouses Shingo and Sho collided with Sho eventually bowling Shingo over with a shoulder tackle. Sho and Yoh double-teamed Shingo so that Sho could put the boots to him in a corner. The battle went to the floor with Naito slamming Yoh’s back into the ringside barricade. 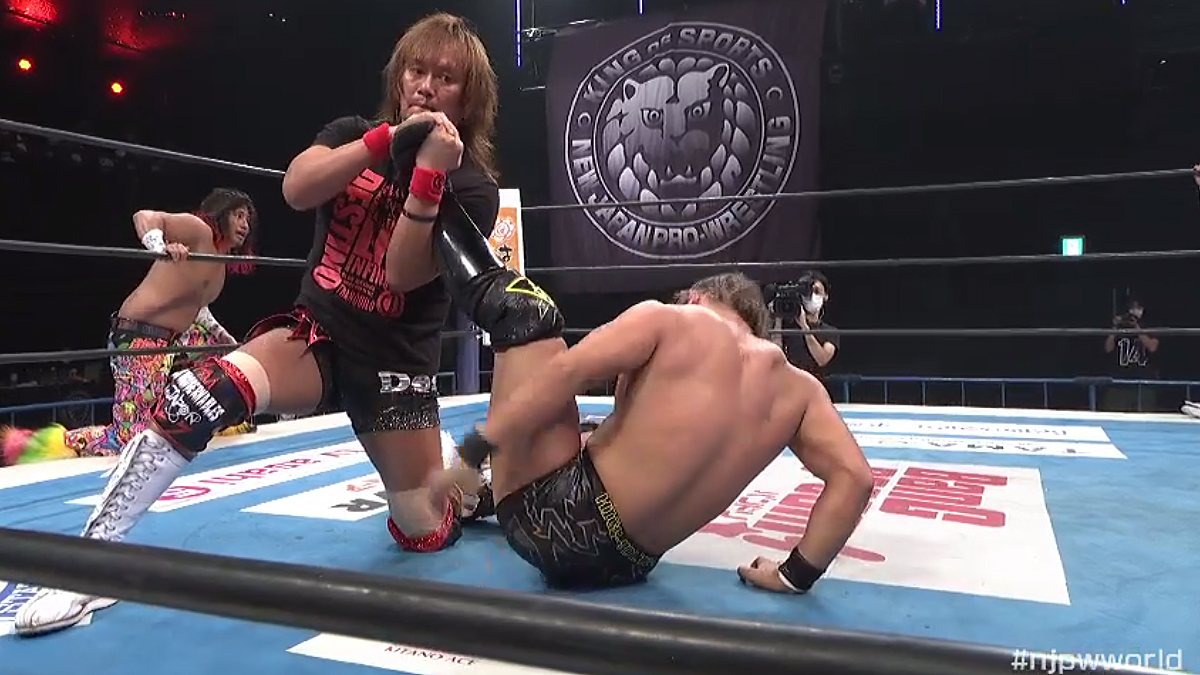 Naito and Okada are back. Courtesy: NJPW.

Hiromu chopped Sho down in a corner with stiff chop after stiff chop. Los Ingobernables de Japon cut Sho off from his corner taking pleasure in punishing his left leg. Sho speared Shingo, suplexed Hiromu to make the hot tag to Okada.

Yoh was no match for Naito who pinned him with a Destino to secure the win for Los Ingobernables de Japon.

Naito will put up both the IWGP Heavyweight and IWGP Intercontinental Championships against the winner of the tournament on July 12th.

Kid meets Tsuji as he enters the ring, getting in his face. Tsuji isn’t backing down. Tsuji is trapped in a half-crab but uses his strength to muscle his way to the ropes. It is a forearm smash, haymaker party in the middle of the ring until Tsuji spears Kid for a two count. Kid submits to the Boston Crab. 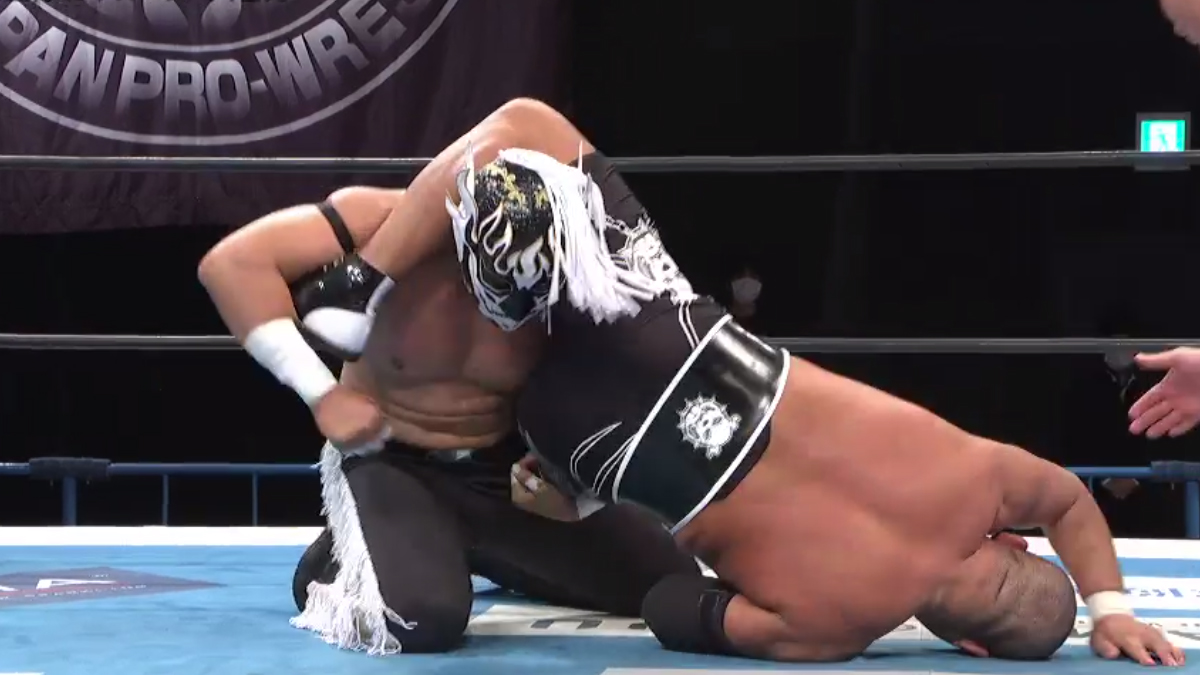 El Desperado has Ishii all tied up. Courtesy: NJPW.

All that time in lockdown hasn’t altered Kanemaru’s taste in whiskey as he has his trusty bottle with him. Ishii and Uemura beat Suzuki-gun to the punch and jump start the match. El Desperado and Yoshinobu Kanemaru quickly take control though double-teaming Ishii, throwing him out of the ring and then taking turns beating on Uemura. Uemura keeps his team alive drop kicking both members of Suzuki-gun. Ishii almost powerslams Kanemaru through the mat. The numbers game catches up with Ishii as Suzuki-gun brutally works over his left leg and knee. Kanemaru pulls Ishii out of the ring. El Desperado makes Uemura submit. Desperado taunts Ishii his opponent in round one of the New Japan Cup tournament tomorrow. Ishii just splits the scene leaving Uemura on his own.

Yujiro is without The Bullet Bunny (Pieter). Sigh. Yano hilariously sprays sanitizer around the ring as he is introduced. Yujiro shoves Goto from behind before the bell can even ring. Goto makes Yujiro pay battering him around the ring to the point that Yujiro collapses in a corner from the onslaught. Yujiro eventually flees the ring. Jado and Yano square off, Jado with his kendo stick and Yano with his turnbuckle pad. Neither will give up their weapon until the other does first. Honma misses his Kokeshi from the second rope. Jado whacks Honma in the back with the kendo stick. Goto saves Yano from being pinned. A quick thinking Yujiro ducks and Goto goes flying over the top rope. Yujiro pins Honma with Pimp Juice.

Taguchi starts things off by out wrestling Sanada. He offers a fist bump to Sanada then kicks him in the stomach. A couple of Funky Weapons to the head has Sanada stunned. Tenzan takes over using the heavy artillery he is known for. Kojima joins in on the fun once he knocks the other members of Los Ingobernables de Japon off the apron. Evil trips up Tenzan from outside the ring so that Sanada can drop kick him in the face. Finally, Sanada is out of trouble. Bushi submits to Taguchi’s ankle lock. Bushi is seen limping after the match and has to be assisted to the back by a Young Lion. Sanada and Taguchi exchange some heated words. Taguchi will take on Sanada in round one of the tournament on June 22nd. 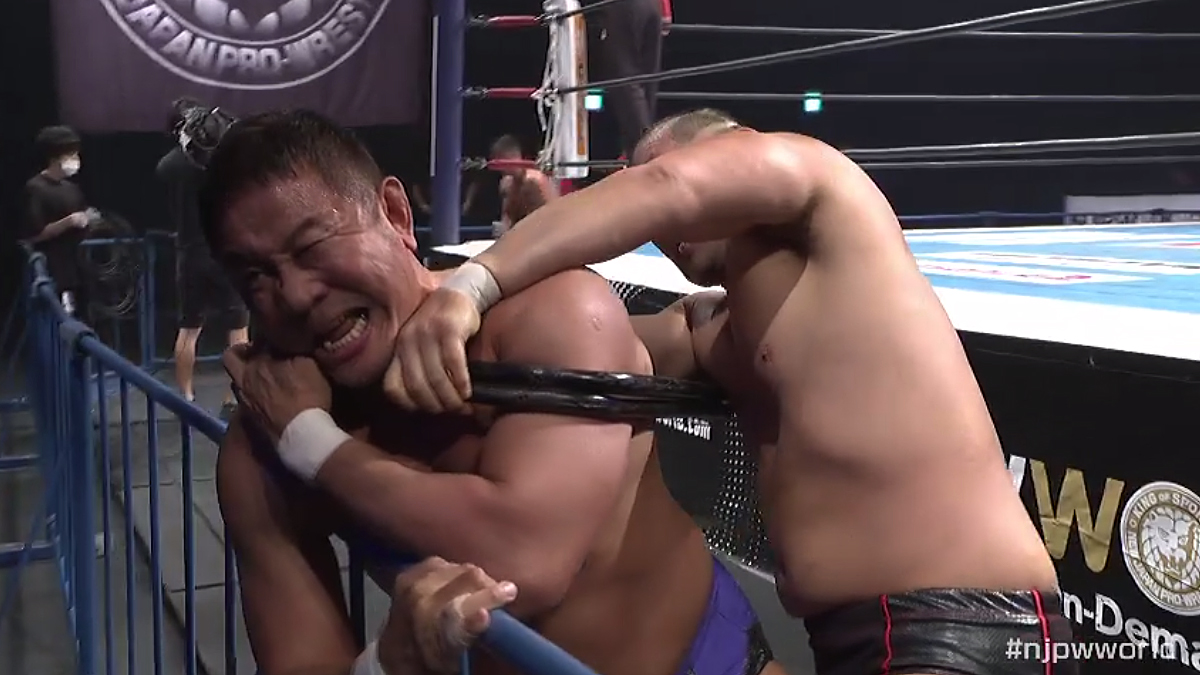 Suzuki chokes the life out of Nagata. Courtesy: NJPW.

The faces get attacked from behind as they pose in the ring. You think they would be able to telegraph this by now. Nagata and Suzuki get the match started with some strong style clobbering trading 161 forearm shots to the face. Even though they have both been tagged out, Suzuki and Nagata refuse to end their battle until the official steps in. Sabre Jr. and Ibushi take over going from counter to counter.

The match becomes a brawl on the floor with Sabre Jr. refusing to let Ibushi out of a submission hold and Suzuki choking out Nagata with a steel chair, throwing him into the ringside barrier.

Later, while the official is once again distracted with all of the fighting on the floor, Douki hits Makabe in the stomach with his steel pipe. Makabe battles back and with a King Kong Knee Drop puts Douki away.

It was fantastic to see NJPW back in the ring again after such a long hiatus. There wasn’t any blockbuster matches on the card but Together Project Special accomplished its goal of getting fans revved up for the New Japan Cup tournament.