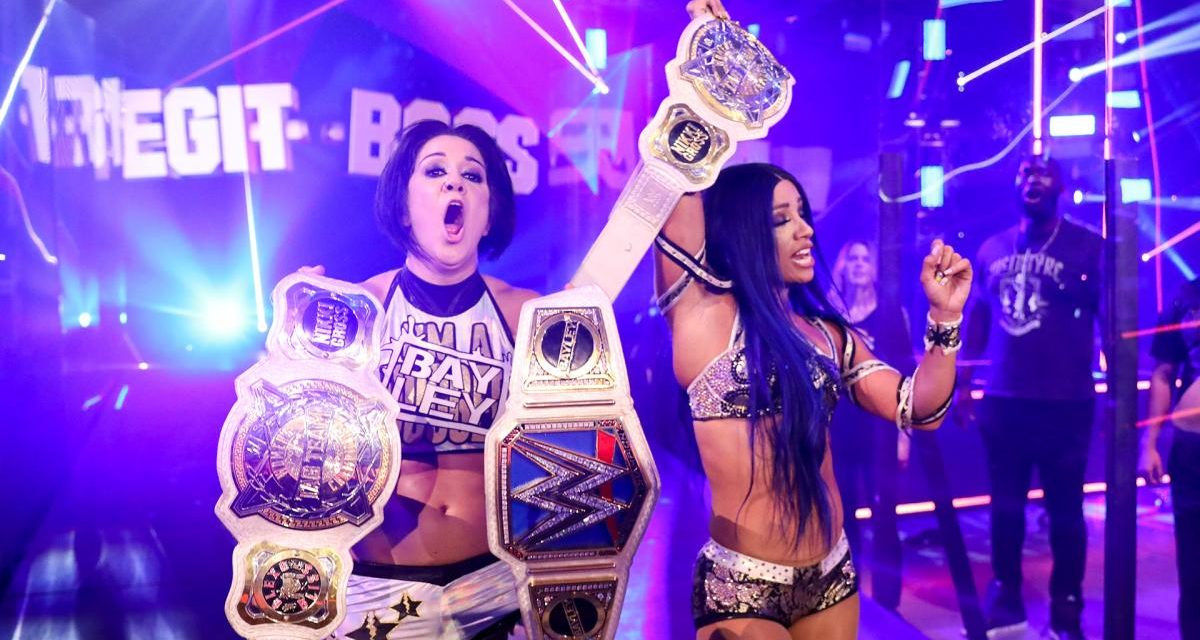 Sasha Banks and Bayley better buy some bigger luggage because they’re going to need it.

On Smackdown, the dastardly duo defeated Alexa Bliss and Nikki Cross to become the new WWE Women’s Tag Team Champions. It is Bayley and Banks’ second reign as champions.

Bliss and Cross asserted themselves in the main event bouncing Bayley around the ring.

The official actually stopped Bayley from tagging in because she wasn’t holding the tag rope….? WWE decides to enforce that rule but allows those lazy back slap tags? Oookay.

Banks and Bayley do everything they can to stop Cross from tagging Bliss but she does. Bliss takes on both Bliss and Banks as Cross is nowhere to be found.

Bayley blind tags herself in. Banks has Cross in the Banks Statement. She doesn’t know that Bayley is legal even though she slapped her right on the back when she was in the corner. Bayley rushes into the ring and literally kicks Banks out of the ring. Banks stands outside the ring looking like someone gave her Burnett’s Vodka instead of a bottle of Armand de Brignac Midas.

Banks breaks up a pin attempt by Cross. She drags her over to their corner so she can tag in. Banks locks Cross in the Bank Statement again. Bliss tries to break things up but Bayley pulls her off the ring apron and onto the floor. Cross bridges. Banks rolls Cross into a crucifix for the win.

Jeff Hardy is in the ring. He thanks the WWE and Fox for giving him the time to address what happened last week.

Yup. They are STILL going with this lame angle, folks.

Hardy explains he passed every sobriety test after he was arrested. The police say the suspect had a red head and beard. Hmmm. I wonder who it could be?

This angle is more predictable than a Braun Strowman match.

“You are not a man, you are a junkie!” declares Sheamus from the rampway.

Hardy and Sheamus brawl on the rampway. Sheamus gets the upper hand once he blasts Hardy with a Brogue Kick. He slams Hardy’s head into the Plexiglas barriers all the way to the ringside area.

Otis discovers Baron Corbin’s crown and cape sitting on a chair in the back unattended. How are Mandy and Otis a couple? There is absolutely no chemistry between them. Otis is believable but Mandy says her lines with all the emotion of a department store mannequin. Otis puts on the crown as he walks away with Mandy. Corbin finds his crown missing. He blows a gasket. 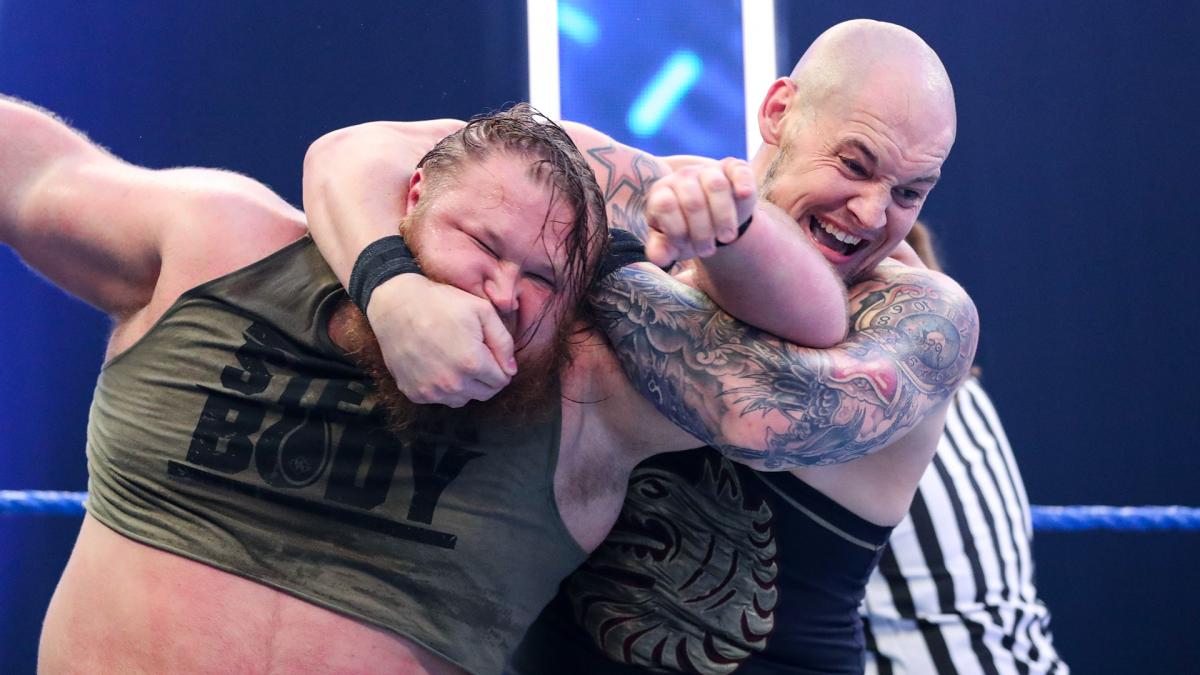 That ridiculous pool-side video is replayed before the match begins. Corbin flips out hurling Otis into a steel post. Otis clotheslines Corbin over the top rope twice. Corbin turns things around by ramming Otis into the ring and a steel post. Corbin spinebusters Otis for a two count. Corbin’s kicks have Otis hulking up. Mandy pleads with Otis to finish Corbin off. Rather than take that lame Caterpillar, Corbin rolls out of the ring, grabs a steel chair and beats Otis with it. Corbin is DQ’d. Otis splashes Corbin in a corner and lands the Caterpillar after all.

We cut to a surveillance van sitting in the parking lot. Inside, Miz and Morrison spying on Strowman who coincidentally arrives late for work. They watch and laugh as Strowman opens a bottle of water which explodes all over him. Strowman has a fit like someone keyed his car. Cesaro, Nakamara and Mojo Rawley blindside Chad Gable backstage until the New Day comes to his rescue.

Absolutely fantastic match. Deville attacks Evans from behind as she comes to the ring. These two complement each other with their hard-hitting styles. Deville is finally showing that she is as nasty as she wants to be. So glad she is finally unchained. Evans rolls Deville into the official who is injured by the collision. He cannot stand up and demands Evans and Deville take a corner until officials enter the ring to supervise the situation, assigning a new referee to the match. Deville drives Evans from the apron to the floor then stands on Evans’ neck. A series of clotheslines and kicks has Deville backtracking. A moonsault gets Evans a two count. Deville cannot believe a running knee didn’t pin Evans. Mandy appears on the Titantron. “You aren’t a fighter. You are a failure!” she laughs. As Deville is distracted Evans clocks her with the Women’s Right.

This match is added to the card because after Styles and Bryan debate, Style agrees to give Gulak an opportunity to face him. Gulak cannot match Styles’ athleticism, however, when he gets his hands on him Gulak has Styles scrambling. A clothesline from Styles stops Gulak right in his tracks flipping him into the air. A series of drop kicks and elbows has Styles out of sorts in a corner. Gulak follows up a fisherman’s suplex with a Michinoku Driver. Styles taunts Bryan as he prepares for the Styles Clash. Gulak pulls a quick one flipping over Styles for the pinfall.

Miz and Morrison smash the windshield of Strowman’s Buick Grand National with a baseball bat then laugh about possibly facing criminal mischief charges.

Mojo Rawley, Shinsuke Nakamura and Cesaro versus Chad Gable and The New Day

Kingston leaps onto Cesaro on the floor. He gets to his feet limping. Rawley makes matters worse as he tackles Kingston sending him flying. Nakamura, Cesaro and Rawley work over Kingston cutting him off from his partners. Gable takes it to Rawley after a hot tag putting his team back in the driver’s seat. Cesaro clocks Gable from the floor. Rawley hits the Hyper Drive. Gable kicks out. Gable splashes Cesaro and Nakamura on the floor. The New Day put Rawley away.

No idea why he is leaving work so early but Strowman is furious after seeing the damage to his car. Miz and Morrison argue instead of just putting the pedal to the metal as Strowman approaches the van. “He cannot get us in here!” snickers Morrison. “You two are dead men!” yells Strowman. Strowman starts rocking the van eventually tips over the 8,800 lbs vehicle.

Who wrote this episode’s angles? Was it college students? Childish pranks. A laughable romance. A van is tipped over. A windshield is smashed. The Hardy and Sheamus storyline. The entire show was so overbooked it wasn’t funny…and neither was the juvenile humour.