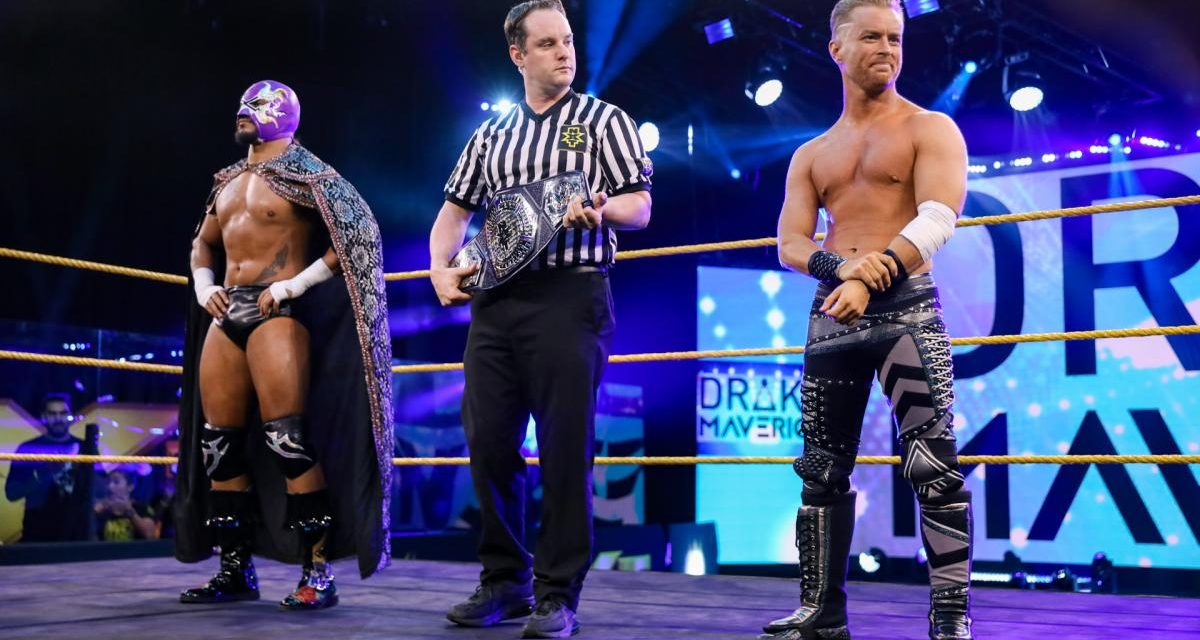 NXT Takeover: In Your House is this Sunday, which will be the first Takeover since February in Portland. As we all know, due to the global pandemic Takeover: Tampa Bay was cancelled, although the matches were spread out over NXT TV. The big story tonight is the finals of the Cruiserweight Title Tournament. Drake Maverick has fought his way to this match, despite being given his release back in April. If he wins, if stays. If not, well, it’s not polite to joke about anyone loses their job.

LaRae tries to attack before the bell, but the ref is able to intercede. The bell rings and Yim takes the fight to Candice. She slams her to the mat with a shoulder block and follows with a PK kick. LaRae tries to escape to the apron, but Yim yanks her back in a Full Nelson. LaRae kicks her way out and hits a senton. LaRae scores a hat trick by landing two more sentons; it’s not enough to get the pin. LaRae with a hip attack in the corner, but a forearm smash from Yim sends her to the floor. Mia swings LaRae into the barricade as both women ignore the count. The ref hits ten and calls for the bell.  The two fight up the ramp and Mia is smashed head first into the LED board. Tegan Nox runs out to make the save, only to have Dakota Kia and Raquel Gonzalez attack Mia. Shotzi Blackheart tries to even the odds. Mia and Candice keep fighting. Johnny Gargano runs to help his wife, only to have Keith Lee give chase to him. WWE officials finally get things under control and William Regal calls in to order a mixed tag team match.

Gargano is not dressed to wrestle, trying to plead his case. Lee chases down Gargano on the ramp and military presses him. Larae jumps on Lee’s back, but he just walks to the ring, tosses Johnny in. Yim is waiting to take him out with a drop kick. LaRae is dumped into the ring and Yim chops her into the corner. Gargano gets back in his corner and Yim chases him off. Candice takes advantage, kicking out Yim’s knee. LaRae is launched into the corner and Yim kicks her in the face. Gargano and Yim take some verbal shots at each other. Yim hits a dragon suplex, but Gargano breaks up the pin. Lee brings Johnny in with a hip toss. Lee with an avalanche in the corner. Gargano counters the Spirit Bomb by stabbing Lee in the eye with his keys. Yim goes to check on Lee, only to get rolled up by LaRae, who is able to get the three count.

Lee tries to catch Garagano before he leaves the ring. LaRae is able to save her husband. Gargano then kicks Lee’s hand into the ring steps and takes his North American Title, laying it out on the floor over the Takeover: In Your House logo.

Dexter Lumis is asked about the chance that the Velveteen Dream beats Adam Cole at Takeover. Lumis goes all Bob Ross on us, pulling out an easel. Unfortunately, we cut away before he is done.

Earlier today, Drake Maverick said he is feeling no pressure because anything could happen in his WWE Crusierweight title match. He compares it to a casino, saying all his chips are on the table.

Adam Cole get treated to a special day earlier this week, courtesy of the Undisputed Era. June first was the one year anniversary of his NXT Title win. Velveteen Dream spent the day contemplating his upcoming match with Cole. The boys hit the town for a nice dinner. I’m assuming they rented out the entire restaurant, with social distancing and all. Dream had a conversation with himself and then saw a vision of Prince? I’m confused.

Back to the Joy of Painting with Dexter Lumis, it looks like his style is actually drawing caricatures. He drew himself driving a truck with the Undisputed Era tied up in the back. Well, now, that’s fun and isn’t creepy at all. Lumis never speaks a word during the whole segment, which definitely doesn’t make it less creepy.

Scott goes right after Nese, knocking him to the floor. The two brawl on the floor and just beat the count to get back in the ring. Nese lays Scott out with a forearm shot. Nese stomps away at him on the apron and locks in the body scissors. Scott reverses, landing shots. Nese with a guillotine choke hold.  Scott breaks the hold with a brain buster. Nese reverses an Irish whip and hits a drop toe hold. Scott drops Nese over the top rope and slams him face first into the ring steps. Scott with a European uppercut and goes up top, when Gentleman Jack Gallagher walks out. Nese takes advantage of the distraction, but Scott counters the Sunset Driver with a sunset flip and gets the pin. At the bell, Gallagher hits the ring, but Scott is able to clear out of the ring.

Tyler Breeze and Fandango are surprise entrants, and their entrance is out of the world. Literally, they are dressed as astronauts. Breeze, Fish and Burch start the match. Fish gets double teamed as Breeze hits a spinebuster and Burch follows with a head butt. The two fight over the cover and then face off. Strong tags in, only to run right into power bomb from Breeze. The Strong and Fish take a break on the floor and the other four men size each other up as we go to commercial.

After the break, Strong is getting stomped into the mat by Breeze and Burch. Breeze with a super kick and Burch follows with a missile drop kick to Strong. Fish is knocked of the apron, but Strong connects with a back elbow to Burch. Strong with a back breaker to Breeze. Fish gets the tag, pounding on Breeze in the corner. Fandango makes the tag and hits a leaping knee. He drops Strong with a tornado DDT, but Fish breaks up the pin. Lorcan in, dealing chops to everyone. He hits the UE with a double blockbuster. Fandango launches Lorcan over the top, taking out everyone. Fandango follows with the assists from Burch to take out the UE. Dexter Lumis looks on from the crowd, good things he is being Plexiglas. After a Beauty Shot from Breeze to Fish, Fandango hits leaping leg drop sh. He covers and gets the win. Breezango are your number one tag team title contenders.

Imperium walks out on stage to size up their next opponents, only to have Malcolm Bivens walk out with his team of Rinku and Saurav.

It only took three interview segments, but now I know McKenzie Mitchell’s name.  (She is not on WWE.com. I checked, multiple times.) Last week, she got a word with Chelsea Green after her win over Charlotte Flair. Robert Stone handled the interview. Green then called herself the hottest she has ever been and promptly fired Stone. She walked off. Stone had to chase after her.

Speaking of Robert Stone, Aliyah has been trying to get his attention. She starts off with a neck breaker to Garrett as Stone makes his way to the ring. He’s looking a little disheveled. Aliyah crushes Santana in the corner, but can’t get the pin. Aliyah with a big slap and goes up top. Garrett with a slap of her own. She sends Aliyah crashing to the mat with a handstand hurricanrana. She follows with a hand spring moonsault and covers to get the win. Stone walks off.

We take an in depth look at the triple threat NXT Women’s title match with a very slick video package, “Prime Target”.

Bronson Reed looks like the kid from Deadpool 2 all grown up. I can’t unsee it and now neither can you. Grimes tries a single leg take down and unsurprisingly it doesn’t work. Reed with chops and a haymaker. He hits an atomic drop and then a bionic elbow. He military presses Grimes before dropping him to the mat. Reed with a senton. Grimes grabs the ropes to prevent getting dragged into the middle of the ring. Reed with a standing Thesz press and a hip attack in the corner. Reed goes up top, but crashes and burns on the splash. Grimes hits the Cave In and covers Reed to get the three count.

After the match, Grimes brags that this is how he beat Finn Balor. Karrion Kross hits the ring. Grimes splits, leaving Reed to get a Doomsday suplex. Kross looks at the camera to deliver a message; Sunday, special, tik, tok. Tommosa Ciampa should be on alert.

Fantasma overs a hand shake and nearly suckers him in with a roll up. The two take it to the mat; Drake with a reversal, nearly locking in a hammer lock. Fantasma with an arm bar into a monkey flip. Maverick kicks out of a rolling crucifix pin. Maverick ducks under a clothesline and hits a flying head scissors. The two go to the floor. Maverick with a running tumbleweed off the apron. We go to commercial.

After the break, Maverick with a low drop kick and follows with a missile drop kick. On the floor, Fantasma power bombs Drake into the floor. He rolls him into the ring, but can’t get the pin. Fantasma with a shot to the lower back and then locks in a surfboard. Maverick breaks free, only to get an elbow to the lower back. Fantasma with a back drop driver, but Drake continues to kick out. Maverick with a knee and then drops him into the middle turnbuckle. Fantasma catches Maverick coming off the top rope and locks in a Boston Crab. Drake forces a break by getting to the ropes. Maverick struggles to get to his feet, but refuses to quit. Fantasma with another sit out power bomb and Maverick kicks out, again. He slaps El Hijo, who snaps. Maverick explodes out of the corner with a clothesline. He pounds away at Fantasma in the corner. He connects with the bulldog and follows with a flying elbow from the top. Fantasma kicks out.

Fantasma with a jaw breaker, followed by a spinebuster. Maverick crotches El Hijo on the top rope. The two fight on the turnbuckle. The head butt each other and both men fall to the floor. The two mysterious Luchadores, who have been abducting wrestlers, run down to Fantasma, who is still on the floor. Maverick takes them out with a suicide dive and fights them both off. Fantasma pays him back, though, with a super kick, followed by the Phantom Driver. He covers Maverick and gets the three count.

Fantasma poses with the Cruiserweight title. The NXT performers in attendance pound the glass for Drake and break out in  a “Thank you, Drake!” chant. Maverick makes the slow walk up the ramp, clearly over come with emotion. Triple H walks out and shakes his hand. He hands Drake a new WWE contract, and it’s safe to say he didn’t see that coming. Maverick signs it, holding back the tears as the show goes off the air.

In the final show heading into Takeover: In Your House, NXT rolled out an entertaining night of wrestling. The “Prime Target” video for the Women’s Championship is worth taking at look at. The Cruiserweight Title match is must see, and call me sentimental, but I’m not too proud to say I teared up when Hunter presented Drake Maverick with a WWE contract. I can’t remember the last time WWE got me like that.