Jim Hutchison: From headlocks to chainsaw-carving 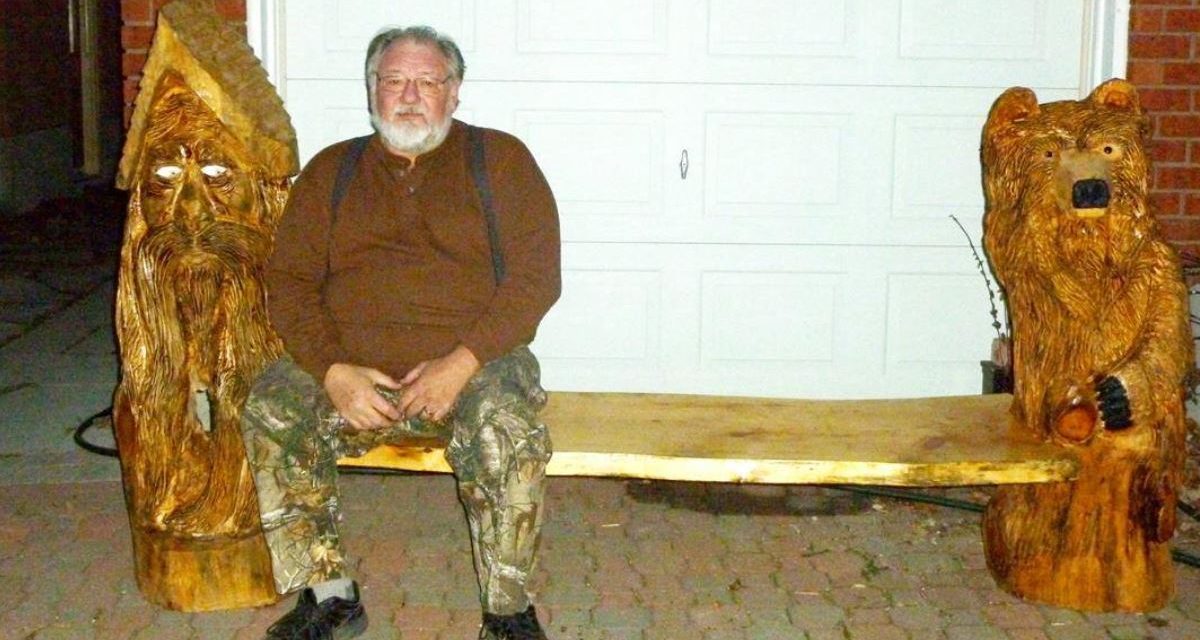 James Hutchinson is a chainsaw-carving, horse-training, country-living grizzled veteran. Though his wrestling career didn’t last long, the stories have stayed with him, as have many of the friends he made.

Now living in Alliston, Ontario, about an hour north of Toronto, Mr. Hutchinson drove his black truck up to a Mississauga Starbucks for an in-person SLAM! Wrestling interview. He is a class A mechanic, and a former gold prospector which would come in handy while driving down the horizon of the road. Life is a journey and Hutchinson has lived it.

Born in 1952 and now weighing 340 pounds, Hutchinson was an amateur wrestler at Martin Grove Collegiate in Toronto’s west end, though he got into trouble for showboating, which nearly resulted in him being kicked off of the team. 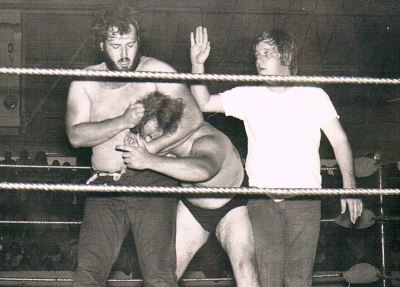 Pro wrestling seemed to fit better. He trained with the Love Brothers, Reggie and Hartford, and Erik the Red. Hutchinson only worked a couple of years, primarily in 1975 and 1976, wrestling at 280 pounds. Besides shows run by the Love Brothers and Bearman McKigney around Ontario, and Tony Parisi in Niagara Falls, his other claim to fame is working with Johnny Powers’ IWA, primarily at the TV tapings in Toledo, Ohio, which included Sailor White, Kurt Von Hess, Kyle Von Shotz [John Hanson], Billy Two-Rivers, Tony Marino, and Lou Thesz — who he wrestled on television and who “tied him in knot.” There were trips to Montreal, where he faced the equally big Serge Dumont, and way out to Newfoundland, were he wrestled The McGuire Twins and Farmer Brooks.

He is quick with stories about veteran legends, the tales coming out of him as easy as breathing.

The McGuire Twins were legit twins whose total combined weight reached upwards of 1,400 pounds! “They were really nice guys,” recalled Hutchinson fondly. In one instance in which a wrist-lock was involved, both twins lost their balance and the ring collapsed, folding in with one of the twins landing on Hutchinson and his tag-team partner.

Then there are the Sailor White stories, which flow like booze, as he was was bad to the bone and who often drank three bottles of Screech — a hard alcohol popular in Newfoundland and Labrador — a day. Hutchinson’s time with White, in the ring and out, still makes him shake his head. He labels White as a sadomasochist, who would bleed in the ring for his own pleasure, spurring the crowd to part like the Red Sea outside the ring. Chaos ensued. “Sailor took a floozy [into his vehicle] and both hit their heads on the windshield. The fender was kicked, the car [absolutely] totaled, although it was still drivable. The RCMP came around knocking on our doors. Sailor White then said that he had torched the car.”

Hutchinson also wrestled often against “Crybaby” George Cannon, who promoted in Newfoundland, though one time the pain didn’t come from his opponent. That night, Hutchinson felt shots of pain shotgun up his back every time was suplexed. His back was completely numb after the continual suplexes. Hutchinson soon realized that an old man in the crowd had been beating him across his back with a cane which caused the sensation of numbness that coursed up his spine. 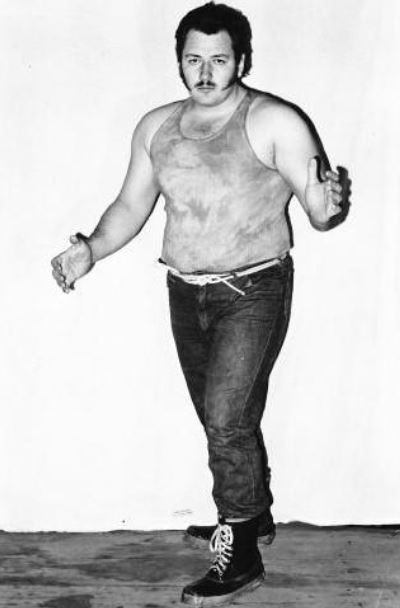 Jim Hutchison in his wrestling days.

Like his NWA contemporaries, Toronto promoter Frank Tunney blacklisted many of the IWA workers during its 1975-1976 run. During a George Cannon-promoted show using many of the IWA workers at the Canadian National Exhibition grounds in Toronto, Tunney ran a show during the exact same night. Tunney didn’t like competition, whether Cannon, McKigney or IWA. “People were sick and tired of [Maple Leaf Gardens headliner] The Sheik. [Sheik would have] short matches [lasting around] three minutes. He stuck around much too long,” said Hutchison. He also described Tiger Jeet Singh as having heat with Angelo Mosca due to “shady business practices in the real-estate industry.” Hutchinson heard Mosca vent often, as they both frequented the same fitness club for a time.

Travelling down the roads was not easy. Hutchinson often had to rent cars on his own dime. Most of the roads were full of rocks and still being constructed in Newfoundland during the 1970s. One time, a large rock went through a fellow wrestler’s radial tire, dangerously piercing it. Hutchinson saw the accident site after pulling in to a gas station and the wrestlers who were involved in the car accident were not helped by paramedics until an hour after it had occurred. “K. Casey [Posniak] really messed up her back,” recalled Hutchinson. “We had to go to the hospital and basically kidnap her.” They then drove her to the airport where she boarded a plane. Afterwards she received better medical attention.

This was not the only car accident which would come to have an impact on the life and mind of Hutchinson. Early in the interview, Hutchinson addressed the death of one of his trainers, Eric the Red, who also wrestled as Eric the Animal, and whose real name was Ib Solvang Hansen. Hansen’s death occurred during a freak automobile accident in Florida, with Hansen being hit while crossing a highway. 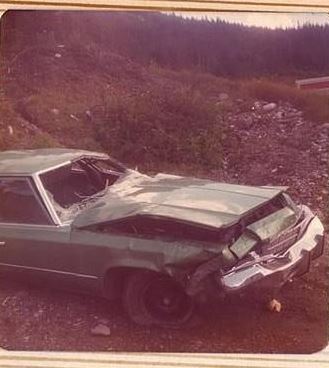 Hutchison keeps a photo of the car from the accident with Beach, Marino and Casey in his scrapbook.

In the late summer of 1975, Hutchinson witnessed his wrestling friends in an accident. The rental car with Tony Marino, Dr. Beach and Kay Casey blew a tire. Beach took the brunt of the impact and was hospitalized for 14 days, initially diagnosed with a dislocated hip. After being transported to Mercy Hospital in Toledo, doctors determined that his hip was shattered. Dr. Beach’s wrestling career was over.

There are funny stories too. The wrestlers, including Whipper Billy Watson and The Great Antonio, once went to a fish factory — in their wrestling outfits — to promote the matches that night. It distracted the workers, upsetting the foreman, but it worked, and many of the workers came to the card that evening.

Hutchinson left the pro wrestling business after it became a losing proposition. “Things were good with the IWA. The pay was good then, but later on I was making $30 for four matches. It was not worthwhile.”

After his wrestling days ended, Hutchinson owned and operated his own restaurant which sold pizza and tacos called Uppercrust Pizza, in Orangeville, Ontario; naturally his wrestling friends would often drop in. He also owned a second small business which printed custom hats and t-shirts.

Later, he became a mechanic, trained race-horses, and prospected for gold part-time. There was also a pretty routine gig in Brampton as a shipper receiver. 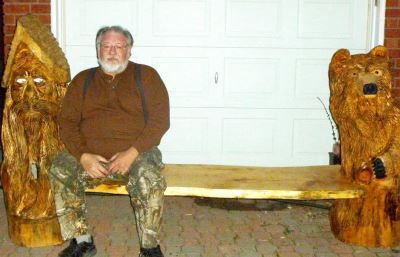 “Hutch” with some of his handiwork.

He has no problem admitting that he had little more than a cup of coffee in the wrestling business, and it’s tough to prove he was even there. Like many wrestlers of the 1970s and 1980s, footage of them is very hard to find. “A lot of tapes were destroyed and re-used,” lamented Hutchinson. 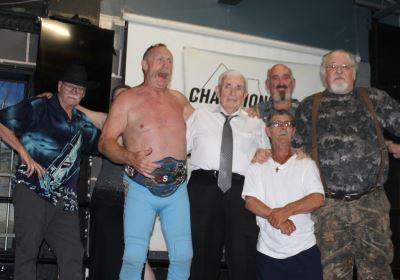 But there have been plenty of chances to relive old glories in recent years. Hutchinson has attended Titans in Toronto events, catching up with old friends, and is a regular at the Championship Wrestling from Ontario shows in Etobicoke, Ontario, where the promoter has set aside a table for wrestling veterans, and it’s there you’ll often find “Hutch” sharing a beer and some laughs with old pals like Tim Gerrard and Big Mac.

After all, Hutchinson may have left wrestling, but wrestling never left him.