Just a few weeks away from WrestleMania, Matt Hardy has announced via his YouTube channel that he has not renewed his contract with WWE.

“I have decided to let my contract with WWE expire. I am going to become a free agent and that’s not saying I’m not going to return the WWE,” he said giving fan an update on his status. 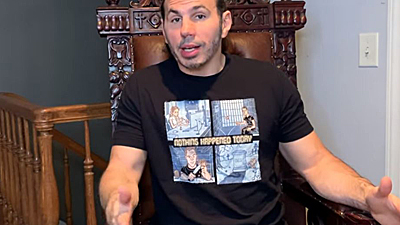 Matt Hardy breaks the news to his fans. Photo: MATTHARDYBRAND via YouTube.

Hardy thanked Vince McMahon for boosting his career and his profile all those years ago.

“I did not want to leave WWE. I love WWE. WWE is my home. WWE has treated me great as an employee for the last three years. They’ve been good to me. They’ve been good to my family. They’ve been great to my kids. I have nothing but great things to say about WWE and all the people who work there and going back 20 plus years ago if it wasn’t for Vince McMahon I would not have been able to obtain the quality of life that I currently have so I will always be grateful for that and I will always be appreciative of that,” he said.

The reason why he is leaving the company is that he and the WWE couldn’t agree on the creative direction for his character or his storylines.

“The reason I needed to leave WWE is because when it comes to my creative stance and my creative outlook on myself and my career and how I wanted to go for these last three or four years that I have to spend as an active in-ring competitor I just think myself and WWE are on different pages. I think right now I need to weigh my options. I need to see what I was out there and I need to see what is going to be the perfect environment for Matt Hardy to maximize these next few years in his career and to be able to really give me a creative canvas to paint my masterpiece because who knows where I’ll pop up,” he explained.

The Hardy Boys returned to WWE at WrestleMania 33 to a big pop winning the Raw Tag Team Championships. Following that, Hardy brought his “woken” gimmick to the WWE. He entered into a memorable feud and partnership with Bray Wyatt but Hardy suffered some back issues which caused him to take a leave from in-ring action for seven months and things soon fizzled out for him after that.

Speculation has been that Hardy could be joining AEW and have some sort of connection to the Dark Order angle.