Land ahoy! After a week aboard a cruise ship, AEW Dynamite resumes shows in actual arenas on the campus of Cleveland State. And hey, a certain No. 1 contender hails from the state of Ohio, so we figure to see him early as AEW Dynamite goes live on TNT.

Sporting an eye patch over his injured right eye (maybe a week too late, since he could have been a pirate at sea), Jon Moxley walks down through the crowd. Addressing the crowd, Mox says it was about the time that he got stabbed in the eye with a metal spike that the fun and games with Chris Jericho were over. Le Champion is the final obstacle in his way from reaching the top of the mountain in AEW, but he also knows there’s a lot more than a wrestling match that comes with challenging Jericho.

There’s also the Inner Circle and the mind games, the cheap shots and group beatdowns. He sneaks in some funny shots at Jericho’s WCW days as well. While Mox admits he’s no saint, he says he can look himself in the eye at the end of every day because he lives by a code. Most of all, Moxley says the champ is a bully, and he hates bullies. So not only does he vow to win the AEW title at Revolution, he invites Le Champion to get a beating ahead of time, as in tonight. Some familiar music hits in response, and Jericho uses his mic time to express the fact that he’s still upset about Moxley refusing to join the Inner Circle, make crude comments about Moxley’s mom, and call Mox a “cracked up, jacked up version of Captain Jack Sparrow.” Of course, he has no intention of a throwdown with the No. 1 contender in Cleveland, and he never goes anywhere without his boys. So a five-on-one mugging, right? Since Mox is from Ohio, he sees it more like five against the entire arena. Or perhaps not, because Jericho says Santana and Ortiz brought some of their buddies from NYC, making it 10 against one. Undaunted, Moxley throws a headbutt as his opening move and charges right into the fray. Security is quickly on hand to break things up, like the buzzkills they are. That was an awfully talky opening segment for Dynamite.

Speaking of people who like to flap their gums, let’s check in on MJF. He’s visiting the Butcher and the Blade at what appears to be their side gig, and he hands them an envelope with “Young Bucks” written on it.

Match 1 — The Butcher and The Blade vs. The Young Bucks

MJF joins the announcers and immediately accuses the Bucks of nearly killing him last week by throwing him in the pool because he doesn’t know how to swim. He also touts the training his mercenaries have received in contrast to the “backyarders” they’re facing. This is the longest we’ve seen Butcher and Blade in an AEW ring to date, and though they fall to a Meltzer Driver, they show no qualms about attacking after the bell, which MJF loves.

Kenny Omega hustles to the rescue, and Hangman Adam Page follows at a slower pace, telling Matt Jackson to literally hold his beer before delivering a Buckshot. Still some “fit” issues with Page and the Elite, I believe.

The announcers spend a lot of time early on putting over Swole’s athleticism, a good idea since she hasn’t seen much time on Dynamite so far. She doesn’t get the win, falling to a sitout powerbomb, but the fans get behind her effort so this feels like mission accomplished.

Getting some underexposed wrestlers more of the TV spotlight must be a theme this evening, because Sabian has also flown somewhat under the radar. He fires out of the gate quickly and has some good classic heel chemistry with Ford. Anderson bumps into the ref and gets ejected from ringside, giving Ford even more opportunity to intervene. Ah, but Sabian is involved in his own feud right now, and sure enough, Joey Janela is in the crowd to offer a helping hand … er, cheek. Sabian gets to show his stuff but Cody rides a wave of offense to a win that the fans eat up.

In case you’re wondering how the Dr. Britt Baker heel turn is going, she gets a chance to insult Jim Ross to follow up on her diss of Tony Schiavone last week. It’s an interesting way to get some heat, and it does appear to be working, especially after Baker throws more jabs at Schiavone and Baker Mayfield.

Backstage, the Young Bucks get some interview time with Omega standing by. The Jackson brothers aren’t forgetting about some revenge against the Dark Order or Santana and Ortiz, but their primary goal is to climb the ladder of tag team contention to get a shot at the belts. As you might expect, a possibly inebriated Page stops by to drop off title belt nameplates for the Bucks, figuring someday they might need them. Also, Omega has arranged a match for all four of them next week against Butcher, Blade and a team of their choosing. That could be good Elite bonding or could go horribly awry.

Match 4 — SCU (Frankie Kazarian and Scorpio Sky) vs. The Hybrid2

SCU pays tribute to the late Kobe Bryant with all three men sporting his jersey. Their opponents were on TV quite a bit last year but haven’t been in action yet in 2020. There’s good back and forth action to be found, but SCU rolls on with a victory. The Dark Order wants a word with Christopher Daniels, explaining that the Exalted One is upset by his snub and has ordered attacks on his friends, family, and SCU teammates.

An atmospheric video shows PAC airing his grievances with darn near everyone. This guy has a bottomless well of anger to fuel him, and it works. He says he’s coming for blood, starting next week.

Think this could be another showcase for Allin? I’m alright with that if it is. Isiah Kassidy is the one who has to absorb most of the punishment before the inevitable hot tag to Allin, who nearly pins Jericho before hitting Jake Hager with the Coffin Drop on the floor. Kassidy hits a big top rope senton on Le Champion but falls just short of a three count. The Judas Effect finds a home on his face and that is all she wrote. The announcers put over the roll that the Inner Circle is on, and the stable poses for a second before returning to the ring to continue smacking Allin and Private Party around.

The fans chant for Moxley as Sammy Guevara jams Allin’s skateboard into his throat. Mox finally arrives, brandishing a baseball bat, and manages to drive off all the heels before pointing the bat a la Sting at a retreating Jericho. That’s a wrap for this week, so we’ll see you in seven! 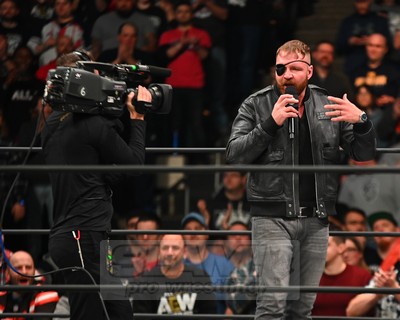 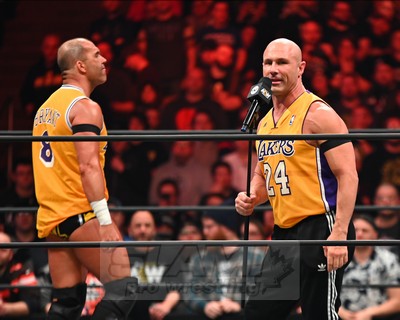 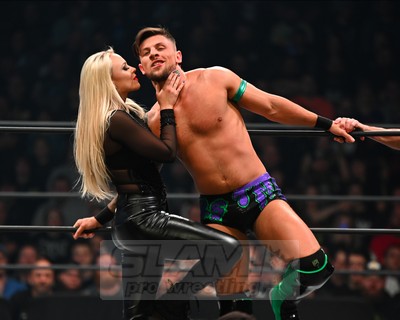 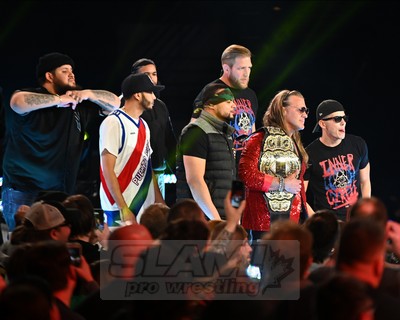 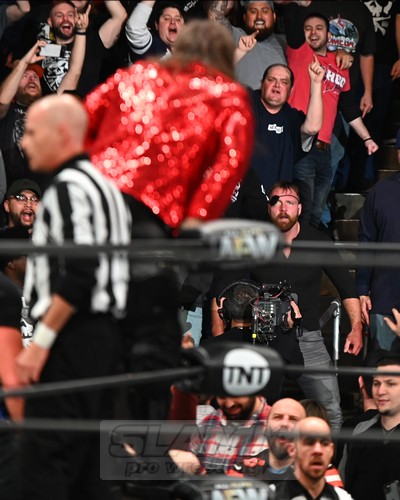 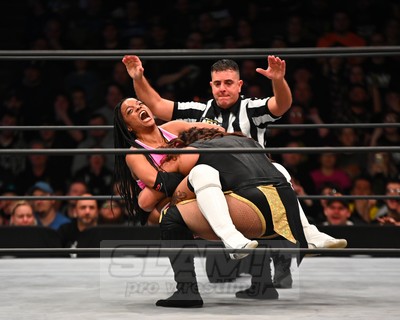 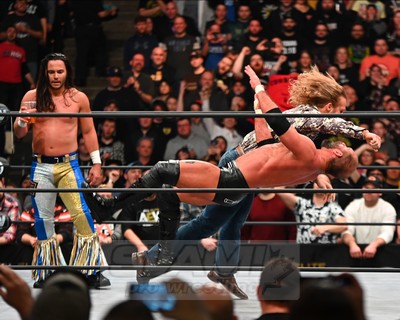 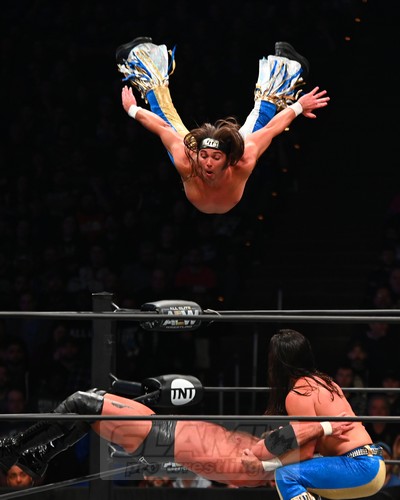 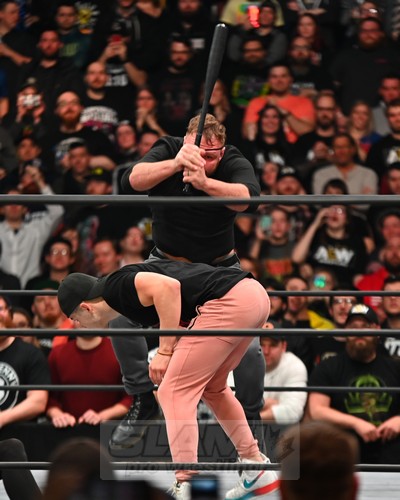 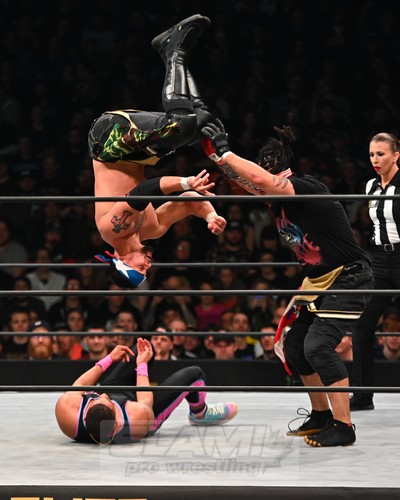 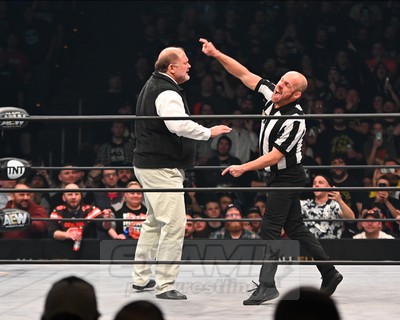