AEW Dynamite: All aboard for action as belts change hands on a boat

You might have heard that the NFL Draft is going to be on a floating stage later this year with prospects shuttled on boats, but AEW has beaten them to that idea because tonight’s Dynamite is completely on a boat. The Norwegian Pearl, to be exact, as part of Chris Jericho’s Rock ‘N’ Wrestling Rager. Let’s set sail for in-ring action, live on TNT.

There are a lot of possibilities for this one, especially with the crowd firmly behind Page, or at least his “Cowboy S–t” catchphrase. The announcers discuss how close the fans are to the ring and the generally small space, but it looks cool on TV because it looks like fans are squeezed into every possible place they could put them. Omega and Scorpio Sky have some fun psychology bits when they are matched up, and it’s a good wrestling pairing as well. And if you’re wondering if Page and Omega will have an accidental bump, they sure do when Page nails Omega with a Buckshot lariat. They pull it together and get back on the same page (no pun intended), and the Hangman ends up running wild to hit his foes with Buckshot lariats of their own. Ladies and gents, we’ve got new tag team champions.The Young Bucks arrive to offer their congratulations, but Page decides to drink some beer and do some crowd surfing instead. As one does.

Kelly is making her AEW singles debut, but even though Baker has been showing some heel tendencies as of late, she figures to get some face pops in this match. The chemistry seems a little off at first, but it comes together acceptably before Baker wins by submission. Tony Schiavone climbs in the ring to get a word with the Doctor, questioning her tactics, which she turns around on him by saying Tony was at Starbucks before AEW started up. OK, complete heel turn confirmed.

If you don’t like the three-man moves that Jurassic Express dreams up, you must not like fun. This is an interestingly laid out match, with the faces enjoying a long stretch of early dominance before Jericho gets the Inner Circle going and Jungle Boy takes the usual extended beating. There’s room for a showdown between Luchasaurus and Jake Hager as well, a showdown that AEW just keeps teasing. Marko Stunt goes for glory with a 450 splash and almost pins Jericho, but the key word is almost. The Judas Effect puts poor Marko down for three.

A video package reviews the high points of the ongoing issues between MJF and Cody. You probably don’t need me to rehash them if you’re an AEW fan.

Even though Janela’s promo last week positioned him to be looking for a better 2020, it’s hard to imagine he won’t be taking the ‘L’ to keep MJF hot. Janela’s mat skills are pretty underrated, but he gets to show them off in the opening sequence. Alas, he ends up getting distracted by Kip Sabian and Penelope Ford, which allows MJF to get the pinfall. This match is really just an appetizer, however, with the main course being a showdown with Cody after the bell. Some good stuff here as MJF taunts his former mentor a bit, knowing one of the stipulations between them is that Cody can’t touch him. However, the Young Bucks can, treating Max to a Superkick Party. Should they throw him in the pool? You know the fans are in favor of this, and MJF takes a ride into the ship’s pool.

Schiavone gets a word with the new tag champs, but only a word or two before the Young Bucks show up. Page says he’s surprised they won them before the Bucks before deciding to peace out, and the dissension within the Elite looks like it will continue on.

Jericho joins the announcers as a very interested observer, and Moxley is still selling the damage from his beating at the hands of the Inner Circle last week with his right eye completely bandaged up. The big question is whether AEW keeps putting off the inevitable Moxley-Jericho clash, and if PAC’s feud with Omega would be delayed as he gets a title shot. Moxley ends up locked in the Brutalizer for what feels like forever, but he rallies to connect with the Paradigm Shift to win the match. Jericho, of course, is unhappy that Mox will get a shot at him at Revolution. But there’s a long time to go before then. See you in seven! 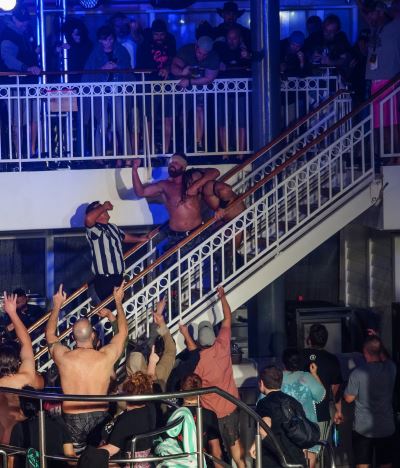 Jon Moxley controls PAC on the stairs on the boat. Photo by Will Byington, courtesy AEW