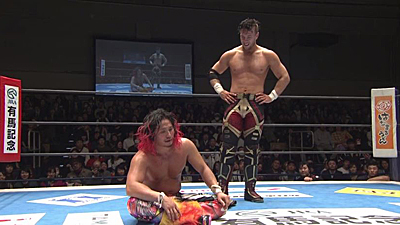 It wasn’t the comeback Hiromu Takahashi had hoped for.

Although it doesn’t appear that Takahashi has lost a step after being away for so long, it was disappointing to his fans in Kōrakuen Hall that his team suffered defeat at the hands of The Birds of Prey leaving some wondering why they didn’t spotlight his big return at Wrestle Kingdom when he faces Ospreay for the IWGP Junior Heavyweight Championship instead.

Ospreay ran Takahashi into security barrier after security barrier. A nasty chop echoing through Kōrakuen Hall knocked Takahashi to the arena floor. Takahashi gave it back to Ospreay though powerbombing him on the ring apron and then shotgun drop kicking him over the barrier and onto the laps of those sitting in the front row.

Takahashi and Bushi dragged Ospreay and Eagles into the crowd simultaneously smacking their heads off the arenas West and East signs.

Ospreay saved a battered Eagles from certain defeat. Eagles took advantage of Takahashi flubbing his Dynamite Plunger to roll him up for the win.

“Not every story has the ending that you want,” Kevin Kelly reminded fans.

Tomorrow’s Road to Tokyo Dome show on the New Japan Pro-Wrestling streaming service is absolutely free. You can check out the full card here. The show is live at 4:30 am (ET) and is archived to view later.

Romero makes Uemura submit notching the win for his team. Tsuji takes a shot at Makabe. Makabe flattens him. Uemura tries the same. Makabe shoves him into a corner.

Jado interferes early on whacking Henare with his kendo stick in the back. Fale gets the three count with a Grenade on Henare.

The Most Electrifying Wrestler Today stuns Sanada with a roll-up after the two rolled around reversing each other’s pinning combinations.

Kevin Kelly tells Phantasmo that he and Ishimori should give back the trophies they stole from Sho and Yoh. “Shut up, Kevin!” snaps Phantasmo. Takahashi is pinned by Ishii’s Brainbuster. Sho and Yoh chase after Phantasmo and Ishimori. Goto stands in the ring staring down Kenta.

The crowd is firmly behind Naito at the start of the match. Takagi clobbers Tanahashi again and again but the Ace won’t be pinned. He ends up rolling Takagi much to Takagi and Naito’s surprise. Takagi pounds the turnbuckles in frustration. Naito kicks Tanahashi in the ribs. Ibushi chases Los Ingobernables de Japón off.