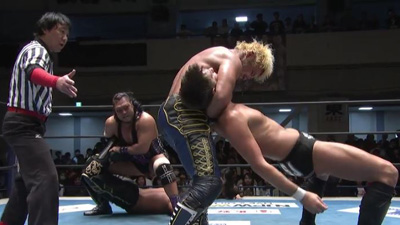 The former champs are in the hunt.

The Los Ingobernables de Japon team of Evil and Sanada has moved into the three-way lead by building up some solid momentum winning seven of their eight matches in the tournament so far.

Evil and Sanada, who lost the IWGP Tag Team Championship belts to the Guerrillas of Destiny way back in February, notched another win tonight by defeating the Suzuki-gun team of Zack Sabre Jr and Taichi. Evil pulled Taichi out of the ring so that he and Sanada could kick Sabre Jr. in the stomach doubling him over. A Magic Killer to first Sabre Jr. and then Taichi set up Sabre Jr. for the moonsault pin by Sanada.

Evil and Sanada are now tied with Juice Robinson and David Finlay and Tomohiro Ishii and Yoshi-Hashi for the top spot with each team having 14 points each.

Hirooki Goto paid Kenta back for his attack a few days ago by blindsiding him after Kenta and Yujiro Takahashi beat Hiroyoshi Tenzan and Satoshi Kojima. Goto rained down forearms and kicks on Kenta before giving him the GTR.

From outside the ring, Yano clobbers Fredericks with a turnbuckle pad. Cabana covers him with the Superman Pin.

In a stunning move, Nakanishi actually lifts Bad Luck Fale off his feet, into the air for a torture rack. Nakanishi gets distracted by Owens though so Fale rolls him up for the pin.

Kenta and Yujiro Takahashi versus Hiroyoshi Tenzan and Satoshi Kojima

Kenta survives Kojima’s Lariat to make him submit to Rings of Saturn submission.

Shingo Takagi and Terrible versus Hiroshi Tanahashi and Toa Henare

Henare kicks out of a Pumping Bomber but not Last of the Dragon.

Gedo hits Cobb in the back with his kendo stick. Loa makes Nicolls submit.