Mat Matters: Video find brings back memories of chickening out

YouTube can be a pretty messed up place at times, full of questionable content, strange people seeking attention, and blatantly one-sided supposed news. But every so often, you come across a gem, something that makes you stop, watch, and, in this case, reminisce.

For me, I recently discovered a Pro Wrestling Canada card from Kitchener, Ontario, from November 23, 1986. 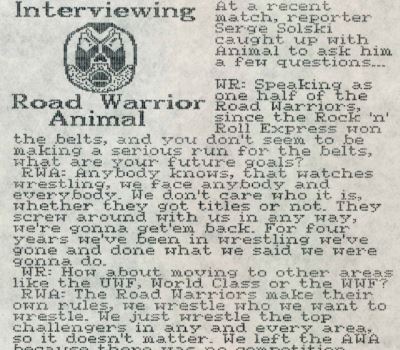 That card marked a turning point for me professionally, a justification that the path that I was on as an up and coming pro wrestling journalist/author was indeed working, even if I chickened out for some of the interviews.

To tell the story, I have to back it up a bit. In August 1985, enthralled by the WWF and Hulkmania, and owning a brand-spanking new Apple IIe personal computer, with a rudimentary desktop publishing program, I launched The Wrestling Report newsletter, along with my best friend, Serge Solski, and my brother, Chris. Serge and I were 14, and Chris was two years younger.

We all enjoyed the initial “success” of the newsletter, sold at school, and at my dad’s office. Knowing the value of publicity, it got to the local newspaper, the Kitchener-Waterloo Record, which did a story on us, the three of us by the computer (nicknamed “Conrad”) with a Mr. T poster from The A-Team in the background. Yes, we were that cool.

Things did progress from there, though Chris drifted away. Serge and I carried on.

Our big break came when I went into a Casey’s restaurant with my mom and sitting there were Angelo Mosca and Milt Avruskin. Everyone knew Mosca in Canada, as he was one of the most famous CFL players in history. Avruskin I knew as the excitable hype-master of International Wrestling of Montreal, which I watched on CITY-TV.

Mosca had been working on bringing the National Wrestling Alliance up to Canada, and had run MoscaMania on February 2, 1986, in Hamilton, at the almost-new Copps Coliseum (now known as FirstOntario Centre). I was at that show and it was great.

Gathering up my 15-year-old nerves, I approached Ang and Milt and told them about our newsletter. They couldn’t have been nicer, especially considering the intimidating nature of “King Kong” Mosca.

Avruskin invited me down to CKCO-TV, Kitchener’s CTV-affiliated station, where they were filming segments for what they hoped would become the Pro Wrestling Canada television show that would run nationally on the network.

The TV show was part of a plan to compete with the WWF, and Mosca had booked shows in Peterborough and Kitchener.

After going to the studio where I really just watched, I was invited to come down to the show at the Kitchener Memorial Auditorium, and conduct some interviews.

This is the show that I recently found on YouTube, the 45-minutes of footage shot by a fan in the stands.

Serge and I were ready, but didn’t exactly have a lot of experience on the interview front. We’d talked to some local wrestlers, but there really hadn’t been many wrestler voices in the pages of The Wrestling Report.

So, backstage at the Aud, Avruskin was good to his word. He brought out Road Warrior Animal, and I chickened-out. But not Serge. He held up the tape recorder, and fired off some questions for the big star. Looking back, the questions are kayfabe, but so what?

Avruskin brought out Ivan Koloff too, and again, I couldn’t do it, but Serge could. Like Animal, Uncle Ivan had a presence to him, and while he wasn’t that tall, you felt small in his presence.

Finally, I did manage to pull it together to talk with Gino Brito, who was the man running International Wrestling, but he was in Kitchener as a wrestler. 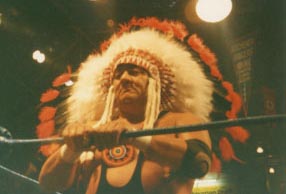 Wahoo McDaniel, my one good photo. Photo by Greg Oliver

That show also marked my first time trying to use a “real” camera, not a point and click, and it was a disaster. Of the couple of rolls that I shot, I had one shot turn out well, this one of Wahoo McDaniel. To this day, I still get flustered trying to figure out F-stops and lighting and apertures. Thank God digital cameras came along for rubes like me.

Seeing the show in its entirety here, or at least a good portion of it, actually fills in a void, since I didn’t actually watch all the matches back in the day.

Those interviews with Animal, Koloff and Brito are available in The Canadian Wrestling Report archives (we renamed along the way), if you enjoy tortuous, dated, kayfabe talks.

On a personal level, I got to know “Uncle Milt” very well, and he was a key figure through the years for me, and I miss him. Mosca was always a presence in Ontario, and still is, even as he battles memory issues these days — he can still go to a Hamilton Ticats game and “be in the moment.” That he came to my first book launch in March 2003 for The Pro Wrestling Hall of Fame: The Canadians meant more than he’ll ever know, and the bonus was that it turned out that he knew my wife’s aunt, and they enjoyed catching up. Later, I was able to attend the book launch of Tell Me To My Face, his autobiography. 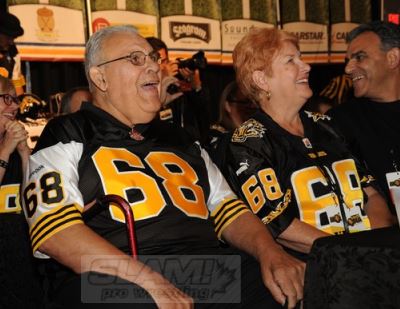 Angelo Mosca, with his wife, Helen, laughs from ringside at Still Mosca in August 2015. Photo by Mike Mastrandrea

Gino Brito has been a frequent interview subject, and has continued to be a true class act. Both Animal and Koloff were interviews I did later down the road too, and both are featured in my books.

Looking back at that card, I can say that I interviewed or interacted with 13 of them at some point or another, and went to some of their funerals too (The Destroyer Dick Beyer, Bullwhip Danny Johnson, and the referee for some of the matches, Wayne Cashman/Cassibo).

This Pro Wrestling Canada card from November 1986 will always mean more to me than the wins and losses we saw in the ring.

You can order the entire five-year run of The Canadian Wrestling Report for just $4.99 Cdn. Click here for information on ordering.