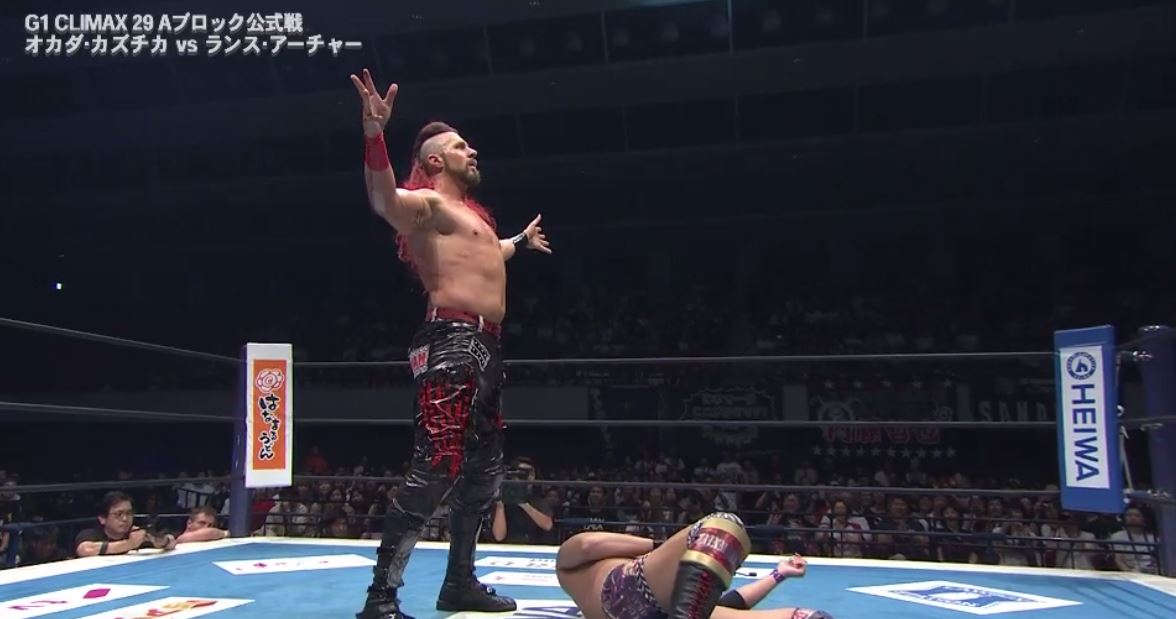 With eight days left in the G1 Climax tournament, the five-time IWGP Heavyweight champion sits at the top of A Block. Defeating Suzuki-gun’s Lance Archer, Kazuchika Okada leads the block by four points over Kenta, Kota Ibushi and Hiroshi Tanahashi who are all tied for second place. Okada remains undefeated in the tournament.

Lance Archer, who has been very impressive thus far during his transition from a tag team wrestler with Killer Elite Squad to singles competition in NJPW, jump-started the match by Stinger Splashing Okada before he had a chance to take off his robe. Two running elbows brought Okada to his knees.

Archer stood on the apron laughing while Okada lay on the arena floor. The Young Lions in attendance had to help Okada remove his robe. Archer flattened Okada with a Cannonball off the apron. He then took a moment to punch a Young Lion in the mouth. Archer slammed Okada into the ringside barrier and the announce table. Archer dragged Okada through the crowd stopping to scowl and yell at a young child. Another Young Lion acted as a punching bag for Archer getting labeled with a haymaker.

“Shut up!” yelled Archer at another fan who was cheering for Okada.

Archer stared down the boy again stalking Okada as he stumbled back to the ring.

“He is absolutely out of control,” said Kevin Kelly of Archer.

Okada slugged Archer over and over. Archer no sold the blows screaming at Okada to hit him again. With one elbow smash Archer knocked Okada to the floor. Archer stood with one foot planted firmly on Okada’s chest. The crowd booed. Another Young Lion got busted in the chops courtesy of Archer.

Archer’s short-arm clothesline was followed by a Rainmaker pose which angered fans.

“Shut up!” Arched yelled again as the crowd cheered for Okada to somehow get back into the match.

Archer walked the ropes, bouncing off of them for a moonsault on Okada for a two count. An angry Archer chased Red Shoes out of the ring.

Archer swatted away an Okada drop kick barreling into him with running elbow smashes.

Okada finally mounted some offense by drop kicking him out of the ring, splashing him on the floor. A DDT back inside the ring only got Okada a one count. A flying elbow into the heart of Archer didn’t even slow the giant down. Archer rose with an EVD Claw on Okada. Okada escaped by backing into the ropes. A Derailer mowed Okada down.

Okada and Archer battled for control of a Tombstone Piledriver. A spinning Rainmaker stunned Archer. Archer remained standing. Okada was flabbergasted. Okada fought off the EVD Claw to spin Archer head over heels with a Rainmaker. Okada pinned Archer barely escaping with the win. Okada shook the hand of the boy Archer has put the fear of God into earlier on in the match as he headed to the locker room.

Bad Luck Fale continues to bring up the rear in A Block with only one win to his credit. Ibushi overcame the interference of Gedo and Chase Owens to pin Fale with a Bomaye and a Kamigoye.

Will Ospreay Versus Zack Sabre Jr.

The World’s Most Electrifying Wrestler somehow defeats one of the greatest wrestlers in the world at present with more submission nonsense.

Sanada gets a massive win over Kenta with a moonsault.

The Ace squeaks by Evil with a High Fly Flow.

Ren Narita and Toru Yano beat Shota Umino and Jon Moxley. Yano won with the low blow and roll up on Umino.