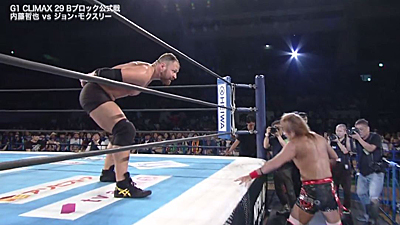 Jon Moxley has pulled ahead of his nearest rival Juice Robinson by four points (two wins) to rule the B Block roost.

Robinson lost to Tomohiro Ishii on night ten while Moxley continued his unbeaten G1 Climax streak by taking Tetsuya Naito, the leader of Los Ingobernables de Japon, to the cleaners.

The IWGP United States champion obviously felt disrespected as Naito entered the ring refusing to acknowledge his presence at all.

Naito continued to take his gear off with the speed of a Canadian river in December further aggravating Moxley. Moxley bounced back and forth on the balls of his feet while Naito fiddled with his pants some more. Once off, Naito threw them into Moxley’s face. The punches started flying.

“Come on! I will give you a free shot. Here, come on!” yelled Moxley putting his hands behind his back and sticking his chin through the ropes while Naito strode around the ring.

Naito faked Moxley out rolling in and out of the ring.

Moxley laid flat on his back in the middle of the ring beckoning Naito back in. Naito rolled in one side and out the other in response. Moxley stepped through the ropes. Naito rolled in and onto his back taunting Moxley.

When the match got back to actual wrestling, Moxley jammed Naito’s head to the mat with a DDT almost pinning him. Moxley pulled his knee sleeve down smashing Naito with the running Regal Knee. Naito was still able to kick out.

Natio and Moxley chowed down on each other’s foreheads. A Destino doesn’t pin Moxley. Another Destino was met with a Deathrider. Naito kicked out. It takes another Deathrider to beat Naito.

In a quick match, Yano missed a mule kick to the crotch. Goto rolled him up. Yano gave Goto a T-shirt as a present.

In a really close match and a war in the squared circle, Ishii snatched the two points away from Robinson with his Brainbuster.

Cobb defeated Taichi with Tour of the Islands giving him his second win.

A brainbuster and Blade Runner gave White the win.

Ren Narita defeated Yuya Uemura with a Fisherman’s Suplex with a bridge.

Bullet Club (Chase Owens, Yujiro Takahashi and Bad Luck Fale) beat Tomoaki Honma and Toa Henare and Kota Ibushi. Yujiro put Honma away with a DDT. Fale did some damage to Ibushi after the bell.