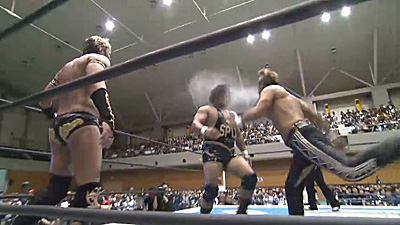 A double champion got into double trouble at Road to Wrestling Dontaku.

Cobb’s team of Toa Henare and Yoshi-Hashi were facing Yoshinobu Kanemaru, Minoru Suzuki and Taichi of Suzuki-gun in a tag team match. Henare tapped out to Taichi’s Stretch Plump submission move to end the bout.

While Cobb was checking on Henare, Minoru Suzuki snatched both of Cobb’s belts giving them to Taichi. Taichi threw them at Cobb. Taichi and Cobb shared some unkind words in the middle of the ring. As Cobb was distracted, Kanemaru spun him around spitting whiskey in his eyes. Taichi hit a blinded Cobb with a super kick to the jaw.

Taichi threw the ROH World Television Championship belt out of the ring, parading around with the NEVER Openweight Championship instead.

Taichi talked some more trash before stomping Cobb in the chest.

Taichi will face Cobb for the NEVER Openweight Championship on the first night of Wrestling Dontaku on May 3rd.