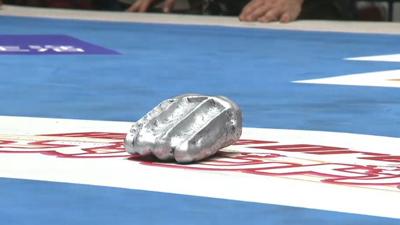 The Iron Glove is no more.

Suzuki-gun’s Takashi Iizuka has had his last match retiring at the New Japan Road event ending a 33-year wrestling career.

In his final match, the 52-year-old Iizuka teamed with his Suzuki-gun brethren Minoru Suzuki and Taichi to take on Toru Yano, Hiroyoshi Tenzan and Kazuchika Okada.

Iizuka began his career in 1986 in NJPW. Three years later he won the IWGP Tag Team Championships with Riki Choshu as his partner. He is most famous for forming the Friendship Tag team with Hiroyoshi Tenzan when Tenzen was booted from the Great Bash Heel stable comprised of Jado, Gedo and Tomoaki Honma. Iizuka would betray Tenzan a short time later joining Great Bash Heel as an uncontrollable brawler. Iizuka would stab GBH in the back when he joined Suzuki-gun.

As he made his very last entrance, Iizuka charged through the audience immediately attacking announcer Shinpei Nogami ripping the shirt right off his back.

The crowd cheered for Iizuka. Announcer Kevin Kelly was dumbfounded by the response.

“He hates all of you people! He would rip your arms off and beat you with them! There is not an ounce of humanity in him!” he said.

Hiroyoshi Tenzan came down to the ring wearing a Friendship Tag team shirt hoping he could somehow reconnect with his old friend.

“Iizuka, please wake up!” pleaded Tenzan in Japanese over the mike. Suzuki-gun, including Iizuka, attacked the faces.

Iizuka stomped and mauled Tenzan inside and outside of the ring. A shoulder tackle from Tenzan finally put an end to the assault. His Mongolian Chops did not beat any sense into Iizuka.

Toru Yano tugged on Iizuka’s beard causing him to chase Red Shoes from the ring. Iizuka threw Tenzen into the ringside barricade, took a steel chair out from under the ring and bashed him with it.

Suzuki and Iizuka double-teamed Tenzan each taking a hand to chomp on.

Tenzan and Iizuka were left alone to wage war against each other in the ring. Tenzen once again tried to talk some sense into Iizuka but the madman was not listening. Iizuka put on his Iron Glove as Tenzen implored him not to use it. Iizuka became conflicted. He took a swing at Tenzen and missed. Yano punched Iizuka in that “sensitive region”, Okada hit him with the Tombstone Piledriver and Tenzen labeled him with a flying head butt from the top rope.

Crouching over a fallen Iizuka, Tenzen shook Iizuka. Tenzen placed his Friendship Tag team shirt over Iizuka pinning him with a moonsault. Iizuka shoved Tenzen away while crowd cheered for him to find his true self once again. Iizuka shook hands with Tenzen…before biting his head, clobbering him with a steel chair and punching him with the Iron Glove.

Iizuka left through the audience leaving his Iron Glove in the ring.

Bullet Club (Robbie Eagles and Taiji Ishimori) defeated Yuya Uemura and Jyushin Thunder Liger. Eagles pinned Uemura with a 450 Splash from the top rope. Ishimori and Liger brawled after the bell. In retaliation for being pummeled into the crowd, Liger smashes Ishimori into a steel post. Liger will face Ishimori for the IWGP Junior Heavyweight Championship on March 6th.

Chaos (Yoshi-Hashi and Tomohiro Ishii) defeated Shota Umino and Yuji Nagata. Even a Young Lion and Yoshi-Hashi cannot keep Ishii and Nagata apart. Nagata has a nasty cut on his back courtesy of Ishii.

One of the founding managing editors of SLAM! Wrestling, John Powell is a veteran entertainment journalist currently covering Big Brother., Survivor for Corus and the video game industry for Culture of Gaming.

John can be reached at [email protected] or @POW2112 on Twitter.

Iizuka’s Iron Glove is left in the ring after his retirement match. Photo: NJPW. 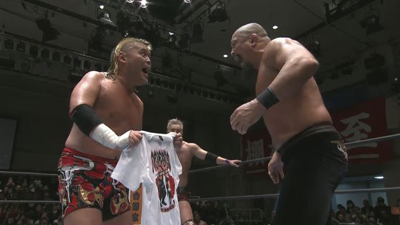 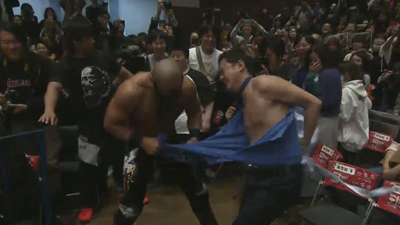 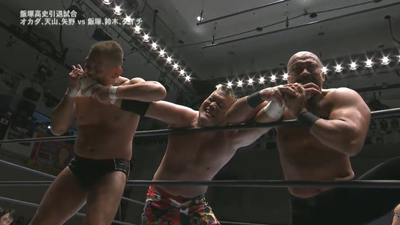 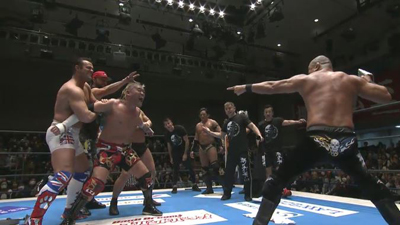