Every match in this week’s Mae Young Classic was worthy of applause. It was evident that each competitor was aware of the stakes going forward, that there was no room for error. It was the match up between Kaitlyn and Mia Yim however, that proved to be the most hard-hitting and powerful bout of the night.

From the beginning of this tournament Kaitlyn, former WWE Diva’s Champion, was out to make her comeback. She seemed to have prepared herself well for the Classic. She demonstrated that she’s been in the ring practicing to outwork any opponent that comes her way. Mia Yim proved to be her ultimate test so far. 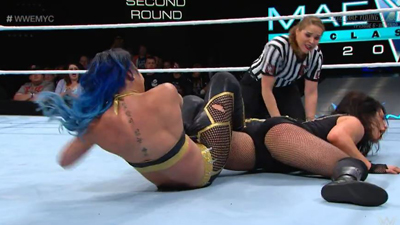 The former martial artist entered the ring with a taped hand from her grueling match against Allysin Kay, where she nearly broke her hand. Kaitlyn attempted to use this to her advantage by bending it and hitting it with full force. Yim countered this strategy with one of her own and went straight for her opponent’s legs, leaving visible red marks from the herculean strikes.

The meet was very back and forth and each wrestler threw every inch of strength they had. I think that this was a well-deserved win for Yim, but she will need to rest that hand before her next fight against Toni Storm in the quarter finals.

I hate to point this out again, but I really don’t understand why it needs to be said that each match will be twenty minutes long. It makes me feel like the women are on some sort of time clock. Funny enough, the episode ended just short of sixty minutes, meaning some bouts were shorter than others. It’s a small detail but I really wish they would leave it out, it’s unnecessary.

The anticipation builds as we move closer to WWE Evolution and I have to say, I can’t wait to see what happens next week!

This is said to be Zeuxis’ dream match and she came ready for it. She lead the match with that classic physicality and mean streak that she is known to use on her challengers. But Io Shirai was not going down without a fight. The young Japanese has so much skill and talent and is entertaining to watch. She got herself onto the top rope and flew off and landed an moonsault on Zeuxis for a win by pinfall. 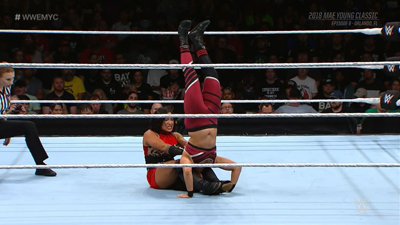 Deonna Purrazzo came into this bout with a win at all cost attitude. She attempted a classic armbar on her opponent but Xia Li managed to escape it and hit her with a high-flying kick to the throat. Purrazzo countered with another Fujiwara Armbar but Li countered it with a reversal. After a few more slaps and kicks by both, Purrazzo tied up Li, holding both of her arm which forced her to submit, giving the NXT star a win. 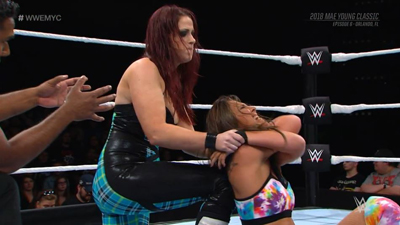 Matthews has the upper hand against Nox. Photo: WWE.

Both of these wrestlers are bringing some serious sass to the competition. Nicole Matthews has been waiting to send Tegan Nox on a flight back home, and she showed that by dominating from the start. But Nox was not going down without a fight. She used every part of her body to fight off the Canadian striker. She eventually found her momentum, launching herself into a cannonball and pinning Matthews for the win.

I don’t think that Mia Yim was intimidated by the former WWE Diva’s Champion in the slightest. Kaitlyn brought the energy as soon as the bell rang, coming at Yim from each corner of the ring. The Blasian Baddie fought back and hit the former champ with a few kicks and a slap to the face. It was Yim though, that forced Kaitlyn into a kneebar that lead her to submit.