Life can work in weird and wonderful ways. Imagine being a huge wrestling fan growing up in Calgary, but your love of comic books takes you in an exciting new direction. Then, boom, a wrestling comic falls into your lap. And then another, and another. It happened to Ryan Ferrier, and, like the writing in his many comics, it’s a great story.

The love of comics and pro wrestling both arrived as a kid in Calgary, Ferrier said.

“I can vividly remember sitting in front of the TV watching hours of WWF programming and renting VHS tapes from my local video store. I was pretty hooked instantly as a kid,” he said.

“Like pro wrestling, I think my attraction to comic books was as organic as it was immediate. Super-powered costumed heroes battling spectacularly evil villains spoke directly to a young, nerdy, slightly hyper-active boy like me,” Ferrier said. 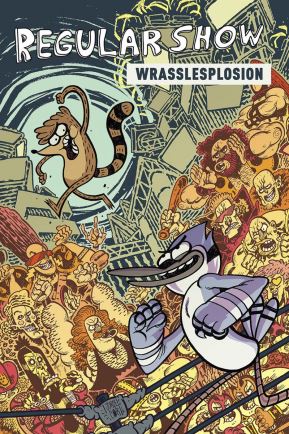 A supportive parent goes a long way. “I also credit my wonderful mom for indulging me in all that stuff, and she actually bought me my first comic books when I was six or seven years old. It’s also not at all difficult to see the similarities in comics and wrestling; it wasn’t uncommon for me to play with my toys as a kid and pit Spider-Man against The Undertaker, which was totally not out of place.” (If Disney ever buys WWE, who knows!)

Ferrier was always creating, drawing his own characters and making up his own short comic strips. “I didn’t fully dive into writing comics until I was a lot older, but I had dabbled in short stories and a brief stint with film reviews for a while before that,” he said. “I’ve always been a person that consumes things but wasn’t comfortable not being a part of creating as well.”

By 2008, the itch to create something bigger was too big to ignore. He began self-publishing comics, while working full-time in another line of work. Really, it became two full-time jobs until 2014, when he quit his “day job” for the up-and-down, wild ride of being a comic book creator, and a sought-after letterer on other people’s comics. “It’s amazing, and I can’t possibly do anything else as a career,” he said.

The self-publishing took him down the road to find employment on “creator-owned books,” which is comic-book speak for licensed properties. He’s done writing for comic books based on Sons of Anarchy, Planet of the Apes, Power Rangers, G.I. Joe, Teenage Mutant Ninja Turtles, Godzilla, Heavy Metal, and Marvel Comics, working on Secret Wars: Battleworld. Boom! Studios published some of his original comics, such as Curb Stomp and Kennel Block, and hooked him up with some of the creator-owned work.

“They know my love of wrestling, so when the opportunity came up they gave me a shout — of course I was in. And now I’ve got several stories under my belt,” said Ferrier.

“I’ve gotten the chance to work with amazing artists like Kendall Goode and Clay McCormack. It’s a pretty incredible convergence of my interests and my talents,” said Ferrier. “I think the cool thing about doing wrestling comics is that everyone involved is a huge fan; otherwise would be pretty challenging, I think. There is a bit of exchange of reference here and there, but I get excited to write a script that I know, for example, Kendall is going to draw; at this point we know the tone and style of each other’s work, and that pairing is so complimentary that it really just clicks.” 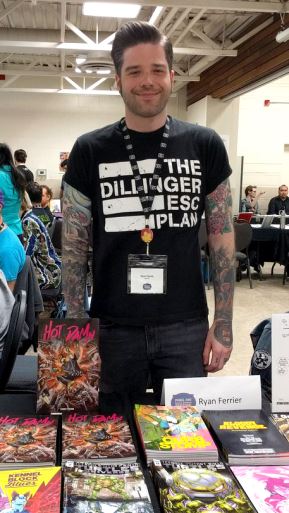 Are there complications ever from WWE about how its superstars can be portrayed? “There’s only a small handful of characters/superstars that are kind of off the table for licensing reasons, but when you look at the vast possibilities of stories to tell with these characters available, there’s really no limitations at all,” said Ferrier. “And the folks at WWE are so into everything on the comics side. Everyone has been really excited and supportive, and just super fun to work with. The only caveat we try to stick to is to bring something totally new to the characters we’re working with — tell stories that no one’s seen before.”

As for feedback from the subjects, he’s still waiting. “Sadly, no, I haven’t heard from any of the superstars, though I know a lot of them do read the WWE series.”

Since Ferrier loved the Ren and Stimpy cartoon growing up, getting a chance to work on the outrageously bizarre properties Rocko’s Modern Life, based on the Nickelodeon cartoon, and the Cartoon Network’s Regular Show, were a dream. The Ferrier-penned Regular Show: Wrasslesplosion marries up his love of chaos and wrestling. “[The] graphic novel was so fun to work on. The wonderful thing about the world of Regular Show is that it’s truly bonkers, so there really wasn’t any limitations. If anything, they (Cartoon Network and Boom! Studios) encouraged me to go as wild as possible, and with a medium like comic books, there’s no better place to do that.”

The 36-year-old Ferrier, who still lives in Calgary, hopes the wrestling-related work continues, even while having high hopes for his original graphic novel, Criminy, coming out in September, and a five issue mini-series, Death Orb, beginning in October.

“I have a story in the WWE: Attitude Era Special #1 which is out this August; Kendall Goode and I team up again to tell a story behind D-X’s invasion of WCW and how the nWo fell into the mix,” he said. “I do know I have a million stories I’d love to do, so I’m crossing my fingers for the call.”