How to Become a Champion, written by former light heavyweight wrestling champion Herb Welch (1908-1999), and released through John Cosper’s Eat Sleep Wrestle (ESW) imprint, offers the public a small glimpse into a commonly-hidden side of professional wrestling, showcasing “the shooting methods that [Welch] and others used to protect themselves and their reputations.” At 44 pages in length, it is a slim treatise, but nevertheless insightful in several respects. 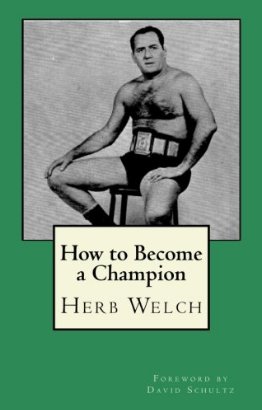 Before the current era of “sports entertainment,” professional wrestling matches were frequently billed as “exhibitions” of wrestling. Wrestlers exhibiting their skills to the public were, in effect, showcasing the range of their talents to an audience in ways that were dramatically engaging. Exhibitions are not unique to professional wrestling. Athletes in virtually every other sport have also participated in exhibitions where the primary purpose was to educate, enthrall, and amuse, as opposed to compete. The central difference, however, is that in professional wrestling, the exhibition became the dominant public manifestation of the sport: so much so that the uniformed commonly assumed that what they saw under the arena lights was the sum total of what the art form entailed. While good performers always brought believability into the ring (so much so that riots were commonplace), snide critics nevertheless dismissed professional wrestlers, and the art writ large, as “phony.” Yet, behind the dramatic and frequently over-the-top exhibitions was another, more competitive, less spectacular, but altogether more deadly, expression of the professional craft: shooting.

When members of the Welch family first entered the wrestling business in the 1924, professionals still had a practical need for legitimate competitive skills. Double crosses could happen in front paying audiences, especially before the territorial system consolidated power into the hands of a nationwide promotional cartel. Athletic shows traversed the country and local challengers tested their mettle against the carnival’s grapplers. More nefariously, a few wrestlers continued to do “hey rubes” where they hustled unsuspecting rural marks out of money. Promotional disputes were periodically settled with back room mat contests. As time went on, though, the skills that lent themselves to such undertakings faded in significance.

In examining Welch’s manual, a reader with some technical background in wrestling will appreciate how the art he demonstrates is distinct from amateur folkstyle or freestyle. As the book makes visually clear, being a proficient shooter as opposed to a proficient amateur wrestler were not, in Welch’s day, interchangeable skillsets. Many of the holds he demonstrates are banned outright in amateur wrestling. More than that, though, in some instances he shows techniques that would normally be effective in manoeuvring an opponent into a pin. Welch, however, modifies them to prevent a person from rolling on to their back. By closing that door to a jeopardized opponent, it gives them little option but to submit or suffer an injured limb: something strictly forbidden in the amateur canon.

Second, in a few cases it is clear that Welch drew his knowledge directly from earlier generations of professionals. Whether he did so through personal instruction or through reading older manuals is not entirely clear, but given that he was born in 1908, the former is certainly not inconceivable. For example, his execution of a standing armlock is remarkably similar to one demonstrated by “Farmer” Burns in Lessons in Wrestling and Physical Culture (minus Burns’ additional of a wrist lock), and his neck-breaking front headlock bears close resemblance in application to one demonstrated by Fred Beell in the aforementioned course. Welterweight champ Walter Miller’s variation on the toehold, as seen in the far-rarer Dick Cameron’s The Science of Wrestling, is also here.

A few of the techniques included in Welch’s manual could also best be classified as demonstration moves, useful for applying on a person to invoke distress, but otherwise difficult to get on a writhing, squirming opponent. Others, such as his “Oklahoma tumbleweed,” are very unique, but would require a more thorough series of illustrations in order to make their execution intelligible to the aspiring student.

In releasing How to Become a Champion to the public, ESW, which is fast establishing a solid reputation in the specialty publishing business for professional wrestling, is certainly not attempting to muscle their way into the market for glossy grappling manuals and run opposition to Invisible Cities Press or Victory Belt Publishing. The previously unpublished manual is reproduced just as it was originally found in Herb Welch’s personal effects, without digital touch-up or alteration. It is not entirely clear when Welch’s book was initially compiled, although judging from his appearance in the photographs, it may have been during the 1970s. Some of the photos are blurry and there is little step-by-step instruction. Someone who wishes to go beyond nostalgic reminiscence or academic examination and achieve technical proficiency will find themselves needing to fill in a lot of the blanks. How to Become a Champion‘s greatest value is therefore as a piece of wrestling ephemera that peels back the curtain, if only partially, on a hidden and commonly guarded element of the old professional craft.

ESW has reproduced Welch’s booklet faithfully. “Dr. D” Dave Schultz’s foreword adds a colourful touch, explaining his personal interaction with the veteran wrestler and the importance of the skills Welch imparted to him. The inclusion of a short preface, outlining some background on where and how Herb Welch came by his wrestling skills, as well as his accomplishments, would have been a great addition to the publication, giving further insight into the fascinating topic of shooting and its place in the near-century old Welch wrestling dynasty.

C. NATHAN HATTON is the author of the book Thrashing Seasons: Sporting Culture in Manitoba and the Genesis of Prairie Wrestling and has over 20 years of involvement in submission grappling, as well as training in karate, boxing and other martial arts. He has undertaken a close study of historical catch-as-catch-can wrestling and currently coaches and trains in Brazilian Jiu-Jitsu at Leading Edge Gym in Thunder Bay, Ontario, where he holds a brown belt in the art. Hatton has a PhD in History and teaches at Lakehead University in Thunder Bay, Ontario.