In person, at Cauliflower Alley Club reunions, “Buddha Khan” Edward A. Carter III was always friendly and approachable, despite his imposing height and intimidating demeanor. When word circulated that had passed away on May 16, at age 78, following complications from a fall months ago, it seemed hard to believe that anything could have toppled him.

But with a nickname like Buddha, looking back, it’s evident he lived a blessed life — in music, in the movie business, on radio, in roller derby and as a professional wrestler. 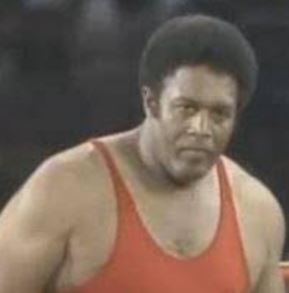 As a singer, he was a part of a number of notable groups, including the Medallions, which he joined in 1956 and stayed with until 1962, when he heeded the call to pro wrestling. Gifted with a deep bass voice, he’d been singing since he was a teenager, singing on his first record around 1953.

He also was part of the Shantones, The Jacks, The Cadets and The Olympics, where he was a part of the song “Hully Gully” that charted. It went on to be covered by dozens of acts, including The Beach Boys. Another hit he was on was Charles Wright’s “Express Yourself” from 1970, backed by The Watts 103rd Street Rhythm Band.

The singing side of Carter never left, and even over the past few years, he performed as a part of a group, even alongside Bowser (John Bowman) from Sha Na Na. 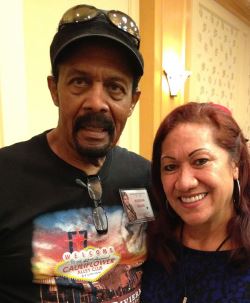 “I don’t like sitting still,” Carter told Eric Chimel, of The Ear, the newsletter for the Cauliflower Alley Club, prior to his Men’s Wrestling Award in 2014. (Carter also was on the CAC board of directors for a spell in the 1990s.)

In high school in Los Angeles, Carter was an athlete, competing in track and field. At a nearby prison that had been converted into a gym, he befriended wrestler Billy Darnell, who taught him the ropes — literally

Darnell stretched him, but Carter kept coming back, and eventually the established star told his trainee, “Hey, you can make some money at this. You’ve got the mouth, and you’ve definitely got the look.”

The actual wrestling career of Buddha Khan (sometimes just Buddha) consisted mainly of work in southern California, especially Los Angeles, and Hawaii. Later in his career, he was a regular on the AWA TV tapings in Las Vegas at the Showboat Casino. In one of those bouts, he put over a young Shawn Michaels.

Probably the best-known run for Buddha Khan came alongside his best friend “Apache” / “Pistol” Pete Marquez, in the mid-’80s, when they were California Championship Wrestling tag team champions. They remained friends through the years, and Carter would often help Marquez train wrestlers.

Marquez kept the news coming on his friend on Facebook. First came the fall down a flight of stairs in early March, and things never got better. Carter was confined to bed, paralyzed.

“The decline of the Buddha Khan, I don’t like to see my friend or any person suffer my friend looks like he is within God’s reach! I pray Buddha won’t tag out and God short arms him. (Buddha’s favorite move) lol” he wrote on April 15.

His last wrestling-related appearance came when he was on WWE TV as Devon Dudley’s father.

“I’d go and sing in England and Mexico, and then come back home and take matches wherever I could fit it in,” said Carter.

He also fit in acting roles where he could. Carter was in many commercials and bit roles on television. ” We worked as a tag team on a series of television commercials for the clothing store chain Miller’s Outpost in 1985,” recalled “Big” Bill Anderson, who, that same year, lost a Loser Leaves Town match at the historic San Bernardino Arena to Buddha Khan. “He was a California icon on the indy circuit. In the 33 years I knew him, I never called him Eddie; He was Buddha Khan to me.” 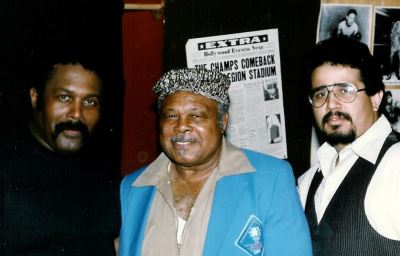 Often, Carter would wrestle in Mexico and appear in films or TV shows, too. He’s in the Richard Pryor movie Stir Crazy, and, using another skillset, roller skating, he’s in the Raquel Welch film Kansas City Bomber.

In the 1970s, Buddha Khan was a skater for the New York Bombers in roller derby, and also served as the team’s manager. The main venue for the roller skating world was the Olympic in Los Angeles, which was also home to pro wrestling, so his worlds often overlapped.

His wrestling and acting lives came together as well in three notable wrestling-related movies: Body Slam, Bad Guys, and Grunt! The Wrestling Movie. 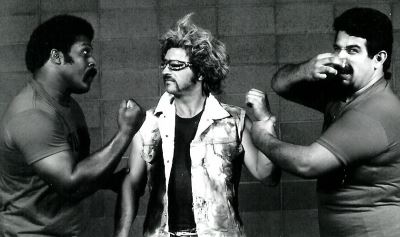 Given his size and intimidation factor, it should not be a surprise that Carter also worked as a bodyguard. He protected singer Lionel Richie around the time “We Are the World” was created, and Carter’s name is on the liner notes as a bodyguard. He also spent time beside boxing icon Muhammad Ali when the champ was in L.A.

As remarkable as Carter/Khan’s life was, one of his personal highlights came when he accepted the Congressional Medal of Honor on behalf of his late father, Edward A. Carter, at the White House from President Bill Clinton on January 13, 1997. During World War II, Carter’s father, a master sergeant, ended up alongside General George Patton in Germany. When the Germans attacked, he was one of eight soldiers who ran across a field to stave off their foes; all but Carter were killed, as he lay in the field still, pretending he’d been killed as well. 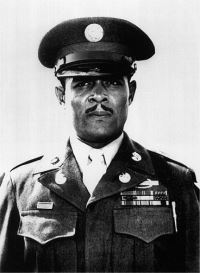 “He laid there all day until it was night,” Carter told Chimel. “Then he went and attacked the Germans by himself. He killed a bunch of them and captured one. And this is the reason he got the Medal of Honor.” (For more on Sergeant Carter’s story, see his page at the The California State Military Museum.)

Khan’s business card, presented to this writer years ago at a CAC reunion, promoted his radio show on WPMD.org, “The Buddha Khan Show.” He told Chimel about the internet-based show, with listeners from around the world: “I do the show every Saturday in the evening from 5 to 7. I play a lot of oldies, but I’ll play anything. I have a ‘White Boy Hour’ where I’ll play hits from white groups from the oldies era. It’s basically two hours of music you would’ve heard on the radio back then.”

That business card also has a memorable tag line, one his family, friends and fans can cherish: “Where Buddha Makes the Difference.”

Funeral arrangements are unknown at this time. He is survived by his wife, Allene.

— Thanks to Eric Chimel for his interview with Buddha Khan